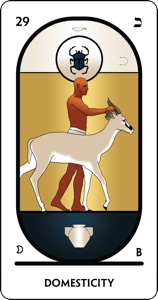 1. Now, the sacred fire has entered the twenty-ninth chamber of the Tarot: Domesticity.

2. A delectable music resounds in the sacred realms of this chamber of the temple.

3. The walls of your temple are already built.

4. Now you must build your sacred tower.

5. Thus, this is how your ego-manas is being Christified in the world of willpower.

6. Plato defined the ego-manas as a compound of one and another thing.

7. Indeed, the ego-manas has something human and something angelic.

8. The ego-manas is a mediator between the earthly human and the Innermost.

11. The ego-manas is a child of both, and is represented by air.

14. The ego-manas is the human will that must be Christified in order to attain fusion with the Innermost.