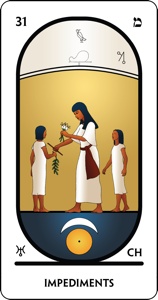 1. The sacred fire has entered the thirty-first chamber of your spinal column.

2. You have been submitted to all types of ordeals, and have become victorious.

3. Walk towards the Gnostic Church carrying the child of your Christified will in your arms.

4. The crown of saints shines around your head.

5. Enter the temple to celebrate the festivity, sibling of mine.

6. This is the thirty-first card of the Tarot: Impediments.

7. These two children symbolize two paths that open before you, like the great "V" of victory.

8. You are before two paths.

9. The first path is the Logoic path, the path of starry skies, the spiral path of the Firmament.

10. The second is the long path of bitterness and woe that takes us to the very gates of the Absolute.

11. Swami Vivekananda has said that tempting gods appear when the initiate tries to enter into the Absolute, they offer to make him a king of certain zones of the universe, so that he does not become liberated.

12. These tempting gods have not been able to become liberated, thus, jealous of their own hierarchy, they tempt the candidate to prevent his entrance into the Absolute.

13. Those beings are a thousand times more dangerous than humans.

14. When arriving at the point of departure between these two paths, a great divine hierarch comes to meet you.

15. This being is of a terrible appearance; he shows you the two paths.

16. The Nirvanic path is a good work, yet the path to the Absolute is a superior work.

17. The Nirvanic path follows the spiral of life.

18. The path of the Absolute is the long path of bitterness and woe.

19. The Nirvanic path is full of paradises.

20. The path of the Absolute is the desolation of the Gods.

21. The Nirvanic path is a path of happiness, where through many Mahamanvantaras the Gods liberate themselves from the planetary masses to finally enter the indescribable bliss of the Absolute.

22. Nevertheless, there are certain Logoi—like the God Sirius, governor of about eighteen million constellations—who still have not managed to be liberated from the cosmos, in order to enter the Absolute.

23. Thus, sibling of mine, you are before a jealous guardian of the cosmos. Define yourself right now for either of the two paths. Define yourself, and do not think about it anymore, because here, there is no longer time to think.

24. This great hierarch offers you the wonders of the infinite, thus, jealous of his own hierarchy, he invites you to enter the Nirvanic path, and warns you against the dangers of the long path of bitterness and woe that leads you directly into the Absolute.

25. Define yourself right now, and advance.

26. I say to my Arhats that it is better to enter the long path of bitterness and woe.

27. I tell them that the Logoic Nirvanic path offers us many paradises, but it is dangerous...

28. Millions are the gods who are full of very serious karmic commitments.

29. Millions are the gods who have not been able to enter the indescribable happiness of the Absolute.

30. The long path of bitterness and woe leads us directly into the uncreated light of the Absolute.

31. The long path of bitterness and woe leads us to the indescribable happiness of the Not-Being, which truly is the Reality of the Being.

32. The long path of bitterness and woe leads us to the profound darkness of the Not-Being.

33. The uncreated light shines within those profound darknesses.

34. Through the long path of bitterness and woe, we awaken the consciousness plane after plane, until totally awakening it in the Absolute.

35. The state of existence ceases for whosoever awakens absolute consciousness; he passes into the state of Being.

38. The Absolute contains the knower, the knowledge, and the known, in complete unity.

39. The Absolute is beyond light and darkness.

40. The Absolute is beyond Spirit and matter.

42. The aspects of the Absolute are abstract space, eternity, and movement, which are three.

43. The void, the darkness, and the Not-Me are the unity of the Absolute.

44. That void is plentitude, those darknesses are uncreated light, and that Not-Me of philosophy is the BEING, the real me; it is the Innermost already liberated.

46. Paranishpanna (absolute bliss) without Paramartha (awakened consciousness) is not bliss.

47. If, after disincarnating, a common and ordinary soul were deposited in the Absolute, that soul , facing the profound darkness of the Not-Being, would be filled with terror. Thus, facing that horrible void of the Not-Me, he would beg us to be removed from the Absolute and brought back into the world.

48. The Absolute is absolute bliss only for the Paramarthasattyas, who are those who liberated themselves from the cosmos and who awakened absolute consciousness.

49. The fire fertilizing the chaotic matter makes cosmic life sprout forth after every profound night.

50. Fire and water are the father and mother of the universe.

51. Fire is the masculine pole and water the feminine principle.

52. Fire is represented by the vertical phallus, and water by the horizontal line. Joined, they form a cross.

53. Fire fertilizing water is symbolized by the sign of the cross.

54. Fire is the father, and water is the mother of the universe; joined, they form a cross.

55. The universe is their child, who hangs from the cross.

56. From within the waters of the chaos rises the cross, upon which Christ becomes christified.

58. Christ is the only begotten.

60. Christ is an inhabitant of the Absolute.

61. Christ surfaced from the Absolute in order to govern the entire cosmos.

62. The Father, of whom Christ speaks, is the Ancient of Days, the Being.

63. Christ is a mediator between humans and the Ancient of Days.

64. The Ancient of Days said to Christ, "Thou art my Son; this day I have begotten thee."

65. "Thou art a priest for ever after the order of Melchizedek."

66. "God, who at sundry times and in divers manners spoke in time past unto the fathers by the prophets, Hath in these last days spoken unto us by his Son, whom he hath appointed heir of all things, by whom also he made the worlds; Who being the brightness of his glory, and the express image of his person, and upholding all things by the word of his power, when he had by himself purged our sins, sat down on the right hand of the Majesty on high; Being made so much better than the angels, as he hath by inheritance obtained a more excellent name than they.

"For unto which of the angels said he at any time, Thou art my Son, this day have I begotten thee? And again, I will be to him a Father, and he shall be to me a Son?

"And again, when he bringeth in the first begotten into the world, he saith, And let all the angels of God worship him. And of the angels he saith, Who maketh his angels spirits, and his ministers a flame of fire.

"But unto the Son he saith, Thy throne, O God, is for ever and ever: a sceptre of righteousness is the sceptre of thy kingdom. Thou hast loved righteousness, and hated iniquity; therefore God, even thy God, hath anointed thee with the oil of gladness above thy fellows. And, Thou, Lord, in the beginning hast laid the foundation of the earth; and the heavens are the works of thine hands: They shall perish; but thou remainest; and they all shall wax old as doth a garment; And as a vesture shalt thou fold them up, and they shall be changed: but thou art the same, and thy years shall not fail.

"But to which of the angels said he at any time, Sit on my right hand, until I make thine enemies thy footstool? Are they not all ministering spirits, sent forth to minister for them who shall be heirs of salvation?" – Hebrews 1

By purchasing a print edition of "Christ's Will", you get a high quality, permanent source of profound knowledge, you help us print more books, keep this website online, and allow us to give free books to prisoners, churches, libraries, and more.
Pick a Bookseller