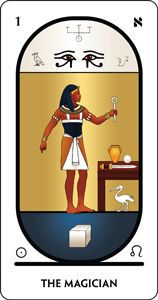 1. Your fifth fiery serpent has entered the first spinal vertebra of the body of willpower, the first tarot card.

2. A majestic temple with an enormous altar is open. A great sacred cloth is extended upon the altar.

4. Now march, oh Buddha, with your cross upon your shoulders towards Calvary.

5. The holy women follow, wailing and weeping for you. The crowds stone you, and a crown of thorns pierces your temples... Pardon the crowds, and bless them...

6. A delicious music with sweet melodies resounds within the temples.

7. The serpent of the body of willpower already began its march towards Calvary, and you have gained the first degree of Christ's will, the Magician of the Tarot.

8. We have seven sacred, fiery serpents: two groups of three, with the sublime coronation of the seventh tongue of fire that unites us to the One, to the Law, and to the Father...

9. These seven sacred, fiery snakes belong to the seven bodies of the human being.

10. We had those seven snakes set upon the staff when we were elementals, yet when we ate of the fruit from the forbidden tree, the seven snakes fell, and were locked up and imprisoned within the coccygeal center.

11. Now, the human being has to lift his seven fiery snakes and set them upon a pole, as Moses did in the wilderness.

12. Each fiery snake shall be lifted in a successive order.

14. Each one of our bodies of sin must be replaced by a body of beauty.

15. By means of the fiery snake of the physical body, we build the body of liberation, made of the purest musk.

16. By means of the fiery snake of the Ethereal body, we build the Soma Psuchikon or body of gold.

17. By means of the fiery snake of the Astral body, we form the Self-Christ.

18. By means of the fiery snake of the Mental body, we form the Mind-Christ.

19. Therefore, the body of liberation, the Soma Psuchikon, the Self-Christ, and the Mind-Christ replace the physical, Vital, Astral, and Mental bodies.

20. Therefore, the fire renews all things, and the Heavenly Man replaces the Earthly Man.

21. The seven fiery serpents are lifted and set upon a pole when the spouses—priest and priestess—are practicing Sexual Magic.

22. There must be sexual connection, yet without even one single drop of semen spilling out.

23. Refrained desire will make our seminal liquid to rise upwardly, towards the head. Thus, this is how our Beings are transformed into omnipotent gods of the universe.

24. Thus, this is how we lift our seven fiery serpents and set them upon a pole, as Moses did in the wilderness.

25. Meanwhile, bachelors and bachelorettes transmute their sexual energy with music, devotion, prayer, and by loving God and their neighbor.

26. With the might of sacrifice, bachelors and bachelorettes make the chi of each one of their seven fiery serpents to rise.

27. Sexual abstention is a tremendous sacrifice.

28. Only the path of chastity and sanctity can lead us to great realizations.

29. Only the path of perfection and unbiased service on behalf of wretched, suffering humanity can take us towards the indescribable bliss of Nirvana.

30. Be pure, sibling of mine; be perfect. Be chaste in thought, word, and deed.

31. Advance, oh Buddha! Advance with your cross upon your shoulders towards the Golgotha of the Father... Your journey has begun with the first tarot card.