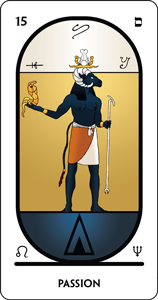 1. Your fifth fiery snake has entered the fifteenth chamber of the body of your willpower.

2. This is the Fifteenth Arcanum of the Tarot: Typhon Baphomet.

3. This is the card of Passion.

4. You had to endured a terrible fight against temptations, oh Buddha, but you became victorious.

5. You did not adulterate, did not fornicate, thus you became triumphant.

6. You did not allow yourself to be taken over by wrath.

7. You did not succumb to sexual passion.

10. Baphomet gives the lowest note and the highest note.

12. Baphomet is an alchemical mystery.

14. With fire, the body of your willpower is being christified little by little.

15. Your human will is being transformed into Christ's will.

16. Receive your small sword on the chest.

17. This small pin with a sword shape represents the degree of Typhon Baphomet.

18. In the cemetery is the tomb where the body of your animal passions was buried.

19. Thus, this is how the body of willpower becomes powerful.

20. Thus, this is how the body of willpower is christified.

21. Thus, this is how the ego-manas is being transformed into fire.

23. The mystery of the Baphomet is Sexual Alchemy.