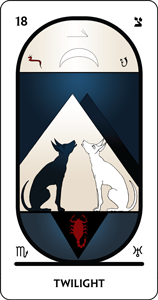 1. Your sacred fire has entered the eighteenth chamber of your spinal column.

2. This is the eighteenth card of the Tarot: Twilight.

3. This is the Eighteenth Arcanum.

4. There are two pyramids: one is white, the other is black, which symbolizes the great battle between the powers of Light and the powers of darkness.

5. There are two dogs: one is white, the other is black; both howl at the Moon.

6. The Eighteenth Arcanum of the Tarot represents occult enemies.

7. You have already seen, sibling of mine, your occult enemies.

8. Many of them are gratuitous enemies.

9. Nonetheless, other enemies simply intend secret revenges against you, because of the damages that you inflicted upon them.

10. This chamber is most difficult.

11. You fought the unspeakable, oh Buddha, but you finally entered.

12. You are amidst the reunion of four masters.

14. A great master lifts your fifth fiery serpent to the eighteenth chamber.

15. On the inside, your head shines with burning fire.

16. Enter into the temple to celebrate the festivity, sibling of mine.

17. Your fifth fiery serpent is being lifted little by little.

18. Thus, this is how you are Christifying your willpower.