1. Now, the sacred fire has arrived at the Brahmarandhra center.

2. This center is situated in the anterior fontanel of the newly born.

3. Your fire exits towards the outer world through this door. 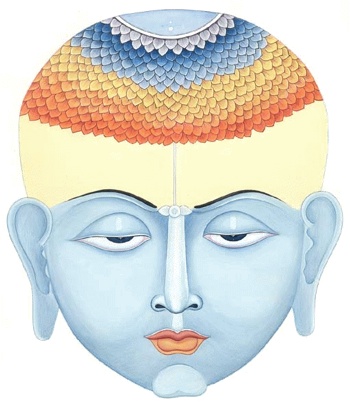 4. The fire scatters through the surrounding atmosphere.

5. Divine Rabbi of Galilee approaches you, oh Buddha, to instruct you.

6. The image of the crucified one shines in your heart.

7. The most exquisite melodies of an ineffable music resound in the temple.

8. You have renounced the bliss of Nirvana for the sake of love towards humanity.

9. The Bodhisattva who renounces the bliss of Nirvana for the sake of love towards humanity is confirmed as thrice-honored, and after ages finally gains the right to be born in the Absolute as a Paramarthasatya.

10. The Guardian Wall is formed by the masters of compassion, by the Nirmanakayas, by those who have renounced Nirvana for the sake of love towards humanity.

11. Those who have renounced Nirvana for the sake of love towards humanity can preserve their physical body through the entire terrestrial period.

12. That is the elixir of longevity.

14. At this moment, the Count of Saint Germain possesses the same physical body with which he was known in Europe during the seventeenth and eighteenth centuries.

15. All of us, the members of the sacred college, depend on Sanat Kumara, the founder of the sacred College of Initiates of the great, universal White Brotherhood.

16. Sanat Kumara lives in an oasis in the Gobi desert.

18. That oasis was formerly a sacred island in the Pacific Ocean.

19. The great illuminated of the third root race dwelled on that sacred island.

20. Yet, with time the sea withdrew, thus today that sacred island is an oasis of the Gobi desert. Sanat Kumara dwells there with a group of great initiates.

21. The white dove of the Holy Spirit hovers upon your head. Be joyful before the music of the temple.