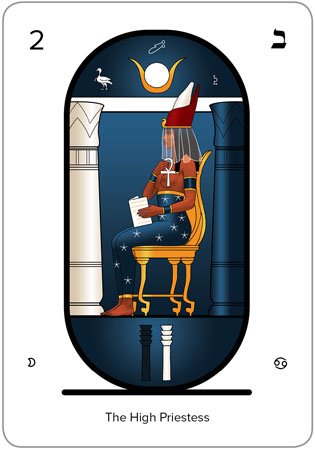 The two columns of the temple of Isis appear within the waters of life, the white column being Jachin, and the black Boaz. Each column has four levels, representing the four bodies of sin (the physical, Vital, Astral, and Mental). Above this, a Master appears seated between two large columns. The two columns are reversed because she is within the temple facing towards us. The act of being seated indicates her passive aspect. In the First Arcanum, the Magician is standing, indicating an active aspect. She is in profile, showing her left side, her negative aspect.

The serpent upon her forehead indicates mastery, that she is risen.

Upon her head are the horns of the sacred bull Apis, the spouse of the divine cow.

Internally, the horns symbolize the Father, and externally, they symbolize the psychological ego, our defects. The attributes of the calf, or Kabir, are also found in the horns. The circle is the serpent that bites its tail, representing the Cosmic Mother, the sacred cow. The veil that falls before her face is the veil of Isis.

The Esoteric Significance of the Arcanum

The Second Arcanum is the Priestess, the occult science. In the area of the Spirit, the number one is the Father who is in secret. The number two is the Divine Mother who is the unfoldment of the Father.

The sacred book of the Mayans, the Popol Vuh, states that God created man from clay, and then from wood (the Atlantean race). But that race forgot their Fathers and their Mothers. They forgot the "Heart of Heaven." Then, came a great deluge and everyone perished. They entered into caves for shelter, and the caves collapsed (this is in reference to the submergence of Atlantis). Thus, every human being has their own Divine Mother and Father who are very sacred. The two columns Jachin and Boaz that sustain the temple are seen in our Father and in our Mother Kundalini .

The Hebrew letter Beth (ב) expresses the dualism of the two columns of the temple. The white, right column, Jachin, represents the man, the masculine principle, and the black, left column, Boaz, represents the woman, the feminine principle. The Great Arcanum is between the two columns, Jachin and Boaz. Actually, this is not understood by many Masonic brothers. The rustic Cubic Stone is placed between the two columns and is later converted into the chiselled Cubic Stone of Yesod. This is nothing other than sex, the Sephirah Yesod. It is necessary to know the arcanum, the Maithuna, represented by the chisel of intelligence and the hammer of willpower.

The ineffable words of the Goddess Neith have been sculpted on the resplendent walls of the temple of wisdom with letters of gold. "I am she that has been, is, and will be, and no mortal has lifted my veil."

The veil symbolizes that the secrets of Mother Nature are hidden to the profane and only the initiate achieves the unveiling after incessant purification and meditation. You must be courageous in order to lift the veil of Isis. Our Gnostic motto is Thelema (willpower). The number one, the Father who is in secret, is the Eternal Masculine Principle. He is within Himself Brahma, who has no form, is impersonal and ineffable, and who can be symbolized by the sun. The number two is the Divine Mother. She is the Eternal Feminine Principle that can be symbolized by the moon. Brahma has no form. He is what He is. But, in Himself, He is the governor of the universe. He is Ishvara, the Eternal Masculine Principle, the Universal Principle of life.

In the human being, the Cosmic Mother assumes the form of the serpent. There are two serpents: the tempting serpent of Eden, which is the Goddess Kali, the abominable Kundabuffer organ; and there is the bronze serpent that healed the Israelites in the wilderness, the Kundalini Serpent. These are the two feminine principles of the universe, the virgin and the harlot, the Divine Mother or White Moon and Astaroth, Kali, or Black Moon, which refers to its tenebrous aspect.

There is a key in order to depart in the Astral Body which should be performed quickly in those moments of awakening from sleep. Upon awakening, you must close your eyes and, without movement, you must strongly imagine any given place. Do not imagine that you are imagining. It must be done factually. You must feel secure about being in the imagined place, uniting the will with the imagination. It is logical that one will triumph if this union is achieved. Place the imagination into motion and walk in the place which is being visualized with faith.

If this practice is performed without moving in bed, while working with imagination (which is feminine) and willpower (which is masculine), one can go to any place that one pleases. This is achieved through retaining the sleepy state, by imagining the place, and by walking with firmness through the use of willpower.

Once, I was in a jungle walking along a roadway, when someone spoke to me about a mountain. Due to the fact that this mountain's surroundings were so dangerous, I went to investigate it in the Astral Plane. I imagined the mountain. I saw fog, many steps, and a group of adepts. When entering the abode, they gave me a spoonful of honey, which is the food of the White Lodge, and the bread of wisdom. Then, they told me that I must purge myself with resinous oil in order to clean my stomach. The next day I left my physical body that was already cleansed in the stomach and I entered the Astral Plane. I then looked to the stars and performed the Rune Man. These adepts commanded me to descend into the Infernal Worlds. I entered a region of profound darkness, where terrible beasts attacked me. These were my egos. I had to pass through many doorways in which I could barely fit through, narrow ways that lead to a cemetery. Everything related to the ego is death and disgrace. The ego is Mephistopheles. It is necessary to work very hard.