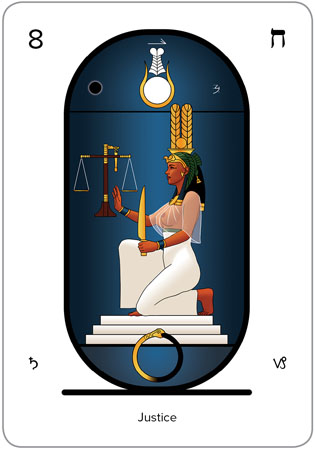 In the waters of life appears a serpent eating its tail, which forms the sign of the Cosmic Mother, the infinite, the number zero.

A woman kneels on a platform of three steps, representing the Arcanum A.Z.F. (water + fire = consciousness) .

In her left hand, she holds the sword of power which is pointing upwards. With her right hand, she balances a scale, which points out that equilibrium should exist between the mind, the heart, and sex.

In the superior part of the plate appears Ra (this is another symbol of Ra, other than the wings).

The Eighth Arcanum of the Tarot is a woman with a sword in her hand before the scale of cosmic justice. Only she can deliver the sword to the Magician. Without woman, no initiate can receive the sword. There is the Eve-Venus, the instinctive woman; the Venus-Eve, the woman of home, and the Venus-Urania, the woman initiated into the great mysteries. Finally, we confirm the existence of the Urania-Venus, the female adept, the deeply realized woman.

The woman of the Eighth Arcanum of the Tarot has in one hand the scale and in the other the sword. It is necessary to equilibrate the forces; it is necessary and urgent to completely sanctify ourselves and to practice the Arcanum A.Z.F. The forces of man and woman are equilibrated in love and wisdom.

The miraculous ascension of the seminal energy towards the brain is made possible thanks to a certain pair of nervous cords that are unfolded in the form of an eight, from right to left, in the dorsal spine.

In Chinese philosophy, this pair of cords is known by the classical name of Yin and Yang. The Tao, the middle path, or the medullar canal is the secret path through which the serpent ascends.

It is obvious that the first of these two canals is of a lunar nature. It is clear that the second canal is of a solar nature.

When the lunar and solar atoms make contact within the triveni, close to the coccyx, the igneous serpent of our magical powers awakens.

The serpent that forms a circle with its figure while in the Gnostic trance of devouring its own tail is an extraordinary synthesis of the marvellous message of the Lord Quetzalcoatl. The serpent in a vertical position illustrates the Maya and Nahuatl idea, which is the divine viper devouring the Soul and Spirit of the man. Finally, the sexual flames consume the animal ego, annihilating it and reducing it to ashes.

Any adept of the Universal White Fraternity can be correctly represented by the “Great Serpent,” that within the symbols of the gods occupies a very notorious place, as is shown in the Babylonian buildings where its form is carved in black stone.

Dupuis has said that Skulapius, Pluto, Esmund, Knepp, are all deities with the attributes of the serpent. All of them are healers and givers of spiritual and physical health and also of illumination.

The Brahmans obtained their cosmogony, science and art of culturalization from the famous Naga-Mayas, who were later known as Danavas.

The Nagas (serpents) and the Brahmans utilized the sacred symbol of the feathered serpent, an indisputably Mexican and Mayan emblem.

The Nagas of esoteric Buddhism are authentic perfect, Self-realized Human Beings. They are the protectors of the Buddha’s law, because they correctly interpreted the metaphysical doctrines.

If the serpent was a symbol of evil, the great Kabir Jesus of Nazareth would never have advised his disciples to be wise like the serpent. It is good to remember that the Ophites, the Egyptian Gnostic wise men of the fraternity of the serpent, would never have worshipped a living serpent as an emblem of wisdom (Divine Sophia) in their ceremonies if this reptile was related with the potencies of evil.

The sacred serpent, or Savior Logos, sleeps nestled in the depth of the ark, mystically awaiting the moment of its awakening.

Kundalini , the igneous serpent of our magical powers, is entwined within the magnetic center of the coccyx (base of the dorsal spine). It is as luminous as lightning.

Those who study Nahuatl or Hindustani esoteric physiology emphasise the transcendental idea of a marvellous magnetic center located at the base of the vertebral column, which is located between the anus and the sexual organs.

In the center of the Muladhara chakra there is a yellow square invisible to the eyes of the flesh but perceptible to clairvoyance, or the sixth sense. According to the Hindus, this square represents the element earth.

The esoteric structure of that magnetic center, as well as the exceptional position between the sexual organs and the anus, gives a solid and irrefutable foundation to the tantric schools of India and Tibet.

It is unquestionable that only through the Sahaja Maithuna, or Sexual Magic, can the serpent be awakened.

The crown formed by an aspid, the thermuthis, belongs to Isis, our particular and individual Divine Mother Kundalini . Each one of us has their own Divine Mother within.

The serpent as a feminine deity within each one of us is the spouse of the Holy Spirit. She is our Virgin Mother crying at the foot of the sexual cross with her heart pierced by seven daggers.

Undoubtedly, the serpent of the great mysteries is the feminine aspect of the Logos, God-Mother, the wife of Shiva. She is Isis, Adonia, Tonantzin, Rhea, Mary, or, better if we say, Ram-Io, Cybele, Opis, Der, Flora, Paula, IO, Akka, the Great Mother in Sanskrit, the Goddess of the Lha, Lares, or spirits of here down, the anguished mother of Huitzilopochtli, the Ak or White Goddess in Turkish, the Chaldean Minerva of the initiatic mysteries, the Akabolzub of the lunar temple of Chichen-Itza (Yucatan), etc.