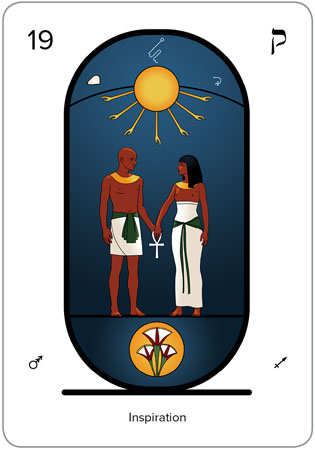 The three flowers in the waters of life represent the three primary forces.

In the middle is a couple holding hands forming the key of Tao.

In the superior part, a radiant sun with seven rays is over their heads, which reminds us of the seven degrees of power of the Fire.

This arcanum teaches us that we attain Final Liberation through transmutation.

The Nineteenth Arcanum is the arcanum of the Alliance, and represents the creative fire, the Philosophical Stone.

In order to perform the Great Work we need to work with the Philosophical Stone.

The Nineteenth Arcanum of the Tarot is the arcanum of the work of the sun. The man and the woman are holding hands and the sun is shining upon them. This indicates to us that this arcanum is related to the mystery of the Fire. The sexual aspect of this arcanum is found in the Kabbalistic addition of 1 + 9 = 10. The number ten is a profoundly sexual number. Here are the circle and the line, the mysteries of lingam-yoni. Only by sexual transmutation is it possible to reach realization of the Self. This is the sacred Alliance between man and woman in order to perform the Magnus Opus.

When meditating on the saints of the medieval epoch, I can prove to myself that these saints, even when they were celibate, had been working in the Ninth Sphere in other lives. They had developed the sacred fire through the Sahaja Maithuna.

By analyzing the life of Saint Philip, we find that while feeling love for the divine he fell to the floor. When he rose up from the floor, he touched his thorax with his hand and discovered a bulge had formed there. He was examined and it was verified that a bulge had formed over his heart. He had felt that the sacred fire of the Holy Spirit was consuming him. After his death, it was discovered that the artery that goes from the heart to the lungs had a great thickness. However, he lived until an elderly age and could even predict the hour that he was going to die. There is no doubt that he had the sacred fire within because of the practice of the Maithuna in previous lives.

Catalina of Bourbon was an extraordinary mystic. She manifested this extraordinary mysticism when she was alive. When she died, they buried her without a box, and when people passed close by her tomb they noticed that a very delightful fragrance or perfume was coming from it. Many sick people were healed by this perfume. Then the priests decided to take her out in order to give her a proper burial. After many months, her body was undecayed and had a very delightful fragrance. She was placed on exhibition with the corpse having only had a short bleeding haemorrhage through the nose. She was sweating and exhaling perfume. She was seated on a chair in a chapel in Italy when she opened her eyes and remained with her body undecomposed.

The Tao says that one of the tests in order to prove that somebody has reached intimate realization of the Self, of the Being, is when one can preserve the physical body without decay and have it exhale perfume.

When the Akash, the causa causorum of the ether and basic principle of the Tattvas, is concentrated in the sexual organs, then this becomes the psychic foundation of the blood, and the pure Akash becomes the food of mystic persons. They take such substances into the blood and can live without eating. There are initiates that can live naked in the snow without eating. In order to reach this, we need very extraordinary concentration.

Catalina of Sena felt herself in the Christ, feeding herself from his blood. The relationship of the Akash with the blood and the blood with the Akash is tremendous.

The mystics were concentrated in the blood of Christ and they attracted all of the pure Akash. In order to do this, tremendous concentration is needed, as well as the transformation of the energies.

In the gallant epoch of the Renaissance, a time of wigs, crinolines, purple cassocks, beautiful dances, and beautiful wagons, men knew how to appreciate a woman and sacrificed themselves for her. A man was capable of any sacrifice for his lady. He knew how to appreciate her and did not even hesitate to deliver his own life for her. There is no doubt that sometimes these customs were abused, but in this epoch, the man knew how to see all of his ideals in the woman. In the twentieth century, man has forgotten the sexual mysteries. The male has lost the sense of moral value. Humanity is in decay.

The animated Essence is spread within all of the entities of the ego. When the ego is dissolved, the Seminal Pearl is formed. When the ego is destroyed, the Auric Embryo is formed; then the immortal principles enter into the initiate; however, the whole matter is sexual. Premonitions about what the creative energy is, was greatly felt in other times.

Actually, the human being is nothing but a legion of devils, full of inner contradictions. The unique value that we have within is the Essence which is spread within the “I’s.”