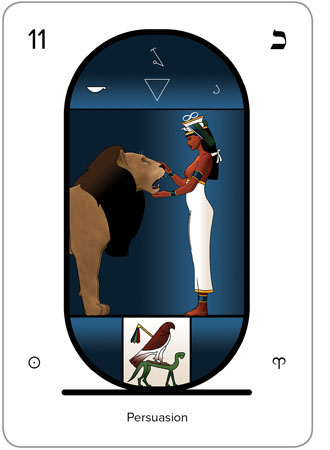 In the waters of life is found the Cubic Stone. Within the Stone is the bird and the long-legged creature; upon it is the dove of the Holy Spirit.

In the middle of the plate, a woman closes the jaws of a furious lion, indicating that she is superior to violence. On her head is a crown with a serpent projecting out from the forehead indicating her mastery.

The Eleventh Arcanum is known in Kabbalah as Persuasion. The hieroglyphic of this arcanum is a beautiful woman that with tranquillity and olympic serenity closes the jaws of a furious lion with her own hands.

The thrones of the divine kings were decorated with lions of massive gold. The gold signifies the sacred fire of Kundalini . This reminds us of Horus, the Gold.

We need to transmute the lead of personality into the gold of the Spirit. This work is only possible in the laboratory of the alchemist. When the fledgling of Alchemy is crowned, he or she self-transforms into a god of fire. Then, with bare hands, the terrible jaws of the furious lion can be opened. The potable gold of Alchemy is the sacred fire of the Holy Spirit.

The union of the Cross-Man in the Triangle-Spirit (Arcanum 12) would be impossible without the liquid gold.

The number eleven is formed by two unities that Heinrich Kunrath translated in these two words, “Coagula et solve.” We need to accumulate the sacred fire and then learn to project it. The clue of this is in the connection of the membrum virile with the genitalia murielis, with quietude of the membrum virile and the genitalia murielis, and using a very soft movement once in a while. Thus, we transmute the animal instincts into willpower, sexual passion into love, lustful thoughts into comprehension, and vocalize the secret mantras.

Man is one unity; woman is the other. This is the number eleven of the Tarot. Therefore, only by working in the Great Work can the man with the woman incarnate the Child of Gold, Horus, the Verb, the great Word. Accordingly, the number eleven is the most multiplicable number.