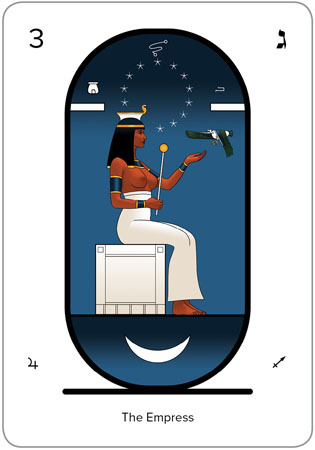 Description of the plate

In the central part of the plate appears a woman crowned with twelve stars (1 + 2 = 3), which represents the twelve zodiacal signs, the twelve doors of the Holy City, the twelve keys of Basil Valentine, the twelve worlds of the solar system of Ors. On her head is a cup with a risen serpent symbolizing mastery, that she is risen. She holds the staff of power in her right hand, and with her left hand she tries to reach a dove, which represents the Holy Spirit. Her clothing is solar, which indicates that she is a Christified Soul , a product of the two previous arcana. She is seated on the perfectly chiselled Cubic Stone.

In the waters of life, the moon is under her feet, indicating that we must trample on the moon in order to convert it into a sun.

The number three is the Empress, the divine light. The light in itself is the Divine Mother. It corresponds to that part of Genesis that says, "And God said let there be light and there was light" (the first day of creation).

It is also the number of the Third Logos that dominates all forms of creation. It is the rhythm of the Creator.

If this arcanum is analyzed more profoundly, a very interesting aspect is discovered. The number one is the Father who is in secret, or the Monad. From Him the Divine Mother Kundalini is born, thus forming the Duad. Then, this unfolds into the number three, which is the Father, Mother, and Son. The Son is the divine and immortal Spirit of every living being. The three—Osiris the Father, Isis the Mother, and Horus the Son—constitute what the sacred book of the Mayans, the Popol Vuh, called the "Heart of Heaven."

The Son also unfolds itself into the animated soul that everyone carries inside of themselves.

The Zohar, the most ancient Hebraic book which is the foundation of the Kabbalah and the Old Testament, insists upon the three principle elements that compound the world. These elements are:

In these three principle elements dwells the perfect synthesis of everything that is from the four manifested elements.

The serpent or savior—who is the Logos—gives inspiration to human beings in order for them to recognize their own identity with the Logos. Thus, they can return into their own Essence, which is this Logos.

The powerful mantra I.A.O. summarizes the magical power of the triangle of the principle elements.

This mantra should not be missing from the schools of mysteries.

Here we are seeing the esotericism of the Holy Three. I.A.O. is the fundamental mantra of the Maithuna. This mantra must be intonated in the Ninth Sphere. Those who want to raise the Soul of the world through their medullar canal must work with the sulfur (fire), Mercury (water), and Salt (philosophical earth).

These are the three elements, the three principles, needed in order to work in the flaming forge of Vulcan.

The secret of the Great Work is found in the Azoth, a manuscript by Basil Valentine. The twelve secret keys of this manuscript are the sexual energy of the Logos only when the rose of the Spirit blossoms on the cross of our body.

One descends to the Ninth Sphere and creates the gold in the flaming forge of Vulcan. The Alchemist-Kabbalist must learn to utilize the sulfur, Mercury, and Salt.

The larvae of the Astral Body, the Incubus and the Succubus which are formed by erotic imagination, are destroyed by utilizing sulfur inside our shoes. These larvae are transparent like the air and absorb the vitality of the Being. In movie theaters, dens of black magic where degenerate movies are shown, larvae adhere to those who frequent these places. One must carry sulfur in one's shoes in order to destroy them. The malignant forms of thought and the larvae enclosed within any room are disintegrated when one burns sulfur on a flaming charcoal. Mercury is used in order to prepare the radiant water. This is prepared for use by placing a mirror in the bottom of a copper container full of water (which must not be a cauldron) and then adding mercury. This helps to awaken clairvoyance. Nostradamus made his predictions with copper and mercury.

Salt has its virtues. When one needs to heal any ill person, one should light a fire in a container where salt and alcohol are mixed. This is done in order to invoke the Masters of medicine Adonai, Hippocrates, Galen, and Paracelsus.

The ternary, the number three, is very important. It is the Word, plenitude, fecundity, nature, the generation of the three worlds.

The Third Arcanum of the Kabbalah is represented by a woman dressed with the sun, with the moon under her feet, and her head crowned with twelve stars. The symbol of the Queen of Heaven is the Empress of the Tarot. She is a mysterious, crowned woman seated with the scepter of command in her hand. The globe of the world is on top of the Scepter. She is Urania-Venus of the Greeks, the Christified Soul , the Celestial Mother.

The Divine Mother of the Third Arcanum is the particular Mother of each one of us. She is the Mother of our Being who must trample upon the moon, the lunar ego, in order for the twelve stars, the twelve faculties, to shine over Her head.

In order to create, we need the three primary forces that come from above, from the Father. They exist in all of creation:

The man is the First Arcanum of the Tarot (the positive force), the woman is the Second Arcanum, (the negative force) and the Christified Soul is the result of the sexual union of both. The Arcanum A.Z.F is the secret that transforms the moon into a sun and represents the three aspects: positive, negative, and neutral.