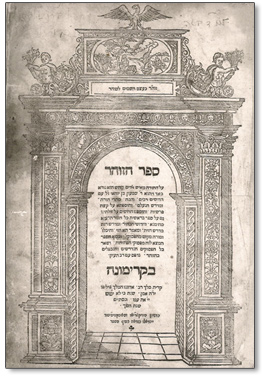 Sepher ha Zohar, or ספר הזהר, is Hebrew for "Book of Splendor," and comes from Hebrew זֹהַר [zohar] meaning "splendor" or "radiance." As such, it is often simply called "The Zohar." This sacred book is a deeply important Hebrew scripture in the tradition of the Kabbalah. Although its date of origin and authorship are contested, the beauty of its contents is undeniable.

The Sepher ha Zohar is written in Hebrew and very little of it has been translated into English. This is largely due to the complexity of the Hebrew and the unwillingness of Kabbalists to share the wisdom hidden in the text. Nonetheless, here we present a few important extracts that illustrate the importance of this book.

"The Sepher ha Zohar presumably was written by Simeon ben Jochai, a disciple of Akiba. Rabbi Simeon was sentenced to death about A.D. 161 by Lucius Verus, co-regent of the Emperor Marc Aurelius Antoninus. He escaped with his son and, hiding in a cave, transcribed the manuscript of the Zohar with the assistance of Elias, who appeared to them at intervals. Simeon was twelve years in the cave, during which time he evolved the complicated symbolism of the "Greater Face" and the "Lesser Face." While discoursing with disciples Rabbi Simeon expired, and the "Lamp of Israel" was extinguished. His death and burial were accompanied by many supernatural phenomena. The legend goes on to relate that the secret doctrines of Qabbalism had been in existence since the beginning of the world, but that Rabbi Simeon was the first man permitted to reduce them to writing. Twelve hundred years later the books which he had compiled were discovered and published for the benefit of humanity by Moses de León. The probability is that Moses de León himself compiled the Zohar about A.D. 1305, drawing his material from the unwritten secrets of earlier Jewish mystics." - Manly P. Hall, The Secret Teachings of All Ages (1928)

"Indeed, the four gospels cannot be understood if one does not study Alchemy and Kabbalah. We must be alchemists and kabbalists; this is obvious.

"The Bible, the body of doctrine, is written in code. Thus, if we want to study the Bible by combining verses, we will proceed in an ignorant, empirical, and absurd manner. We find the key to interpret the Bible only in the third book, in the Zohar, written by Simon Ben Jochai, the great enlightened rabbi." - Samael Aun Weor, Alchemical Symbolism of the Nativity of Christ

For detailed examination of many important teachings in The Zohar, study: