Zohar: Let There Be a Firmament

'And Elohim said let there be a firmament in the midst of the waters and let it divide the waters from the waters'" (Genesis 1: 6)

Firmament [from Latin firmāmentum (considered as fixed above the earth), from Latin: prop, support, from firmāre to make FIRM the motion (momentum) of the energy].

Rabbi יהודה Yehudah (better said יחידה Yehidah-Unity) said: "Seven firmaments (Kosmoses) are there on the outer space founded on and governed by the great law of universal harmony, of which the Tetragrammaton or sacred name is a symbol (of unity).

"Prana is the cosmic energy. Prana is vibration, electric motion, light and heat, universal magnetism, life. Prana is the life that throbs in each atom and in each sun. Prana is the life of ether. The Great Life, in other words, Prana, is transformed into a very divine, intensely blue substance. The name of this substance is Akasha (the waters of Genesis).

"Akasha: The Akasha is a marvelous substance that (as water) fills the entire infinite space and when it is modified it becomes ether. It is very interesting to know that the ether, when modified, becomes what we call the Tattvas. – Samael Aun Weor

The Akashic waters above are related to two superior Tattvas named Adi and Samadhi that are also named reflective and luminous ethers, these vibrate during the dawn and are excellent for internal meditation - Samadhi is achieved through them.

When the waters below summon the waters above, it is through (the archetypes or Pranic imprints in Chesed that hovers in) the (sixth) firmament (the Microcosmos) that the (power, Holy Spirit of the) waters above descend and give life and strength to all (Chaioth) living creatures (ethereal principles of life, through the Akashic sexual waters) below as hath been stated.

By 'a garden enclosed' is meant, the spouse (the synthesis of Chaioth, the four inferior tattvas in Malkuth) congealed therein (as the Akasha tattva-sexual water or semen), the universal mother of existing things (Chaioth), from whom flows forth the great river of the water of life (the universal marvelous substance named Akasha), which if it should cease to flow (from above) the waters below would become congealed and infertile.

Thus, as rivers and streams become frozen when the north wind blows, and remain so until the south wind (Geburah-Pranic fire) comes and dissipates by its warmth and heat the frost, in like manner, the waters of the river of life (the universal marvelous substance named Akasha) do not flow into the world of humanity (Malkuth) except under the influence of the life divine (or Ruach Elohim, hovering in the air between the waters). Such is the esoteric meaning of the firmament existing between the higher and lower regions of life.

Scripture does not say: "let there be made a firmament and let it be placed in the midst of the waters, i.e., between the waters above and those below; for the firmament here mentioned (is formed by the archetypes of splendor or Pranic imprints that) existed before the beginning of the creation of the world (the Microcosmos), thus, it was only placed between them, that is, above the Chaioth or living creatures (of Malkuth)."

Rabbi Isaac (Geburah - Might) said: "In the human body, there exists an organ called the diaphragm, separating the heart from the abdomen, so that what the heart receives or takes in (through the archetypes or Pranic imprints in Tiphereth) is transmitted to the abdomen (and stored in Yesod-Sex). So is it through (the archetypes or Pranic imprints in Tiphereth and Chesed that hover in) the firmament in the midst of the waters, or the higher sphere (Adhi and Samadhi tattvas in Yesod) and the lower sphere (Akasha, Tejas, Vayu. Apas and Pritvi Tattvas in Malkuth) of existence.

The diaphragm, located below the lungs, is the major muscle of respiration. It is a large, dome-shaped muscle that contracts rhythmically and continually, and most of the time, involuntarily. Upon inhalation, the diaphragm contracts and flattens and the chest cavity enlarges. This contraction creates a vacuum, which pulls air into the lungs. Upon exhalation, the diaphragm relaxes and returns to its domelike shape, and air is forced out of the lungs. 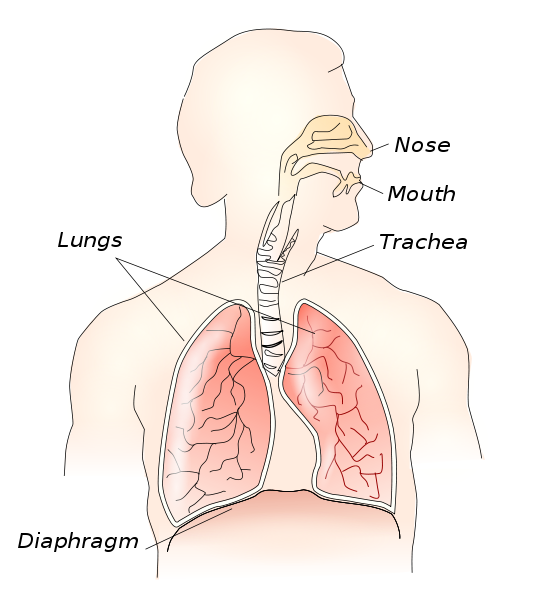 What it (the heart-Tiphereth) receives from the higher (Sephirah-Kether) it transmits (by the power of Geburah through Yesod) to the lower sphere (Malkuth) for the maintenance and continuity of human and animal life. There is an allusion to this in the words:

And you shall put up the veil (Geburah) under the hooks (ribs), and put inside it the ark of the law: the veil is to be a division between the holy place (Tiphereth- the heart) and the most holy (Yesod-sex). – Exodus 26: 33

"The arch of (Binah) his house is based on the waters (of Yesod); he (Binah) makes the clouds his carriage; he (Binah) goes on the wings of the wind (Chesed-Ruach Elohim)." ( Psalm104: 3)

'On the waters' also signified the waters on high (the Akasha or marvelous substance that as water fills the entire infinite space) by which the house (to Soma Psychikon, the sixth firmament) was built, as it is written:

Rabbi Yessa said: 'He makes the clouds his chariot.' the aged separated the plural word עבים Abim (clouds) into singular עב Ab (cloud), and ים im (ocean), denoting that darkness (thick fog upon the waters of Yesod) proceeded from the left side of the Sephirothic tree of creation.

'He goes on the wings of the wind' refer to (Binah) the Holy Spirit from on high (of Chesed-Ruach Elohim), symbolized by the two golden cherubim placed at each end of the mercy-seat, as it is written:

'Thou shall make two cherubim of gold; of beaten work shall thou make them' (Exodus 35: 18).

Of these cherubim we also read:

Whilst the manifestation of the Divine (splendors of the archetypes or Pranic imprints) is confined and limited to the higher or heavenly spheres (or Sephiroth) He (Binah) is said to ride upon a cherub (fiery sexual forces in Yesod), but after its appearance in the world (of Malkuth as ether of life), then He (Binah, the Holy Spirit) rides upon the wings of the wind (Chesed-Ruach Elohim)."

Rabbi Joseph said: "It is written:

"He (Binah, the Holy Spirit, Yod-Havah Elohim) establishes (in Geburah) the force of the wind (Chesed-Ruach Elohim); Yes, he (Binah) weights the (power of Geburah on the) waters (of Yesod) by measure. (Job 28: 25).

These words refer to that just proportion or measure of the life principle (in Yesod) necessary for the development and perfection of all animated creatures (in Malkuth), and which proceeds from the (Monad through the) Sephirah Geburah (Justice)."

Rabbi Abba (the Father) said: "The ancients relate that when the great Masters (Chesed and Geburah) descended and came upon earth, they began their meditations on the mysteries of creation by observing the strictest silence (of Netzach, the mind), impelled thereto by the fear (Geburah) lest by a single word they should divulge what was revealed to them (in Heaven) and thus subject themselves to condemnation."

Said Rabbi Eleazar (God's helper): "At first the initial letter of the alphabet (Aleph, symbol of Air), alternately ascending and descending (as the Ruach Elohim), impressed on the surface of the lower waters (in Malkuth) the forms of all the other letters (or archetypes or Pranic imprints), and they became the complement of each other. After the formation of these letters (archetypes or Pranic imprints) they became the foundation (Yesod) of the world. Then the (splendors of the) waters above mingled with those below, giving rise to the words (let there be a firmament) called Beth (house, the To Soma Psychikon).

This is why Scripture (Bereshith) begins with the letter Beth in order to teach that the origin of (Adam) the (microcosmic) world is due to the mingling and blending of (the ethereal principles of) these waters which continued until the firmament (To Soma Psychikon) which now separates them was established and fixed. This separation took place (or started) on the second day of creation (or Second Initiation of Major Mysteries) and on that day was also created Gehenna (Hell), which continues to exist as the place of the devouring fire (from the polluted waters of Styx) reserved for the wicked fornicators.