The Four Directions on the Tree of Life (Kabbalah)

And the Iod of the Logos Jehovah (Va-Iod-Dabar Iod-Havah וידבר יהוה) said unto משה Moses and to אהרן Aaron:

“Every (איש fiery Iod) man by his own banner, with the ensign of their father's (zodiacal) house of the children (archetypes) of Israel.” (Numbers 2:2). These are the four camps (four elements, four cardinal points, the יהוה tetragrammaton) of the (zodiacal belt or) Congregation of Israel, who represent the twelve tribes (or twelve zodiacal constellations) and twelve (physical and psychological) boundaries all encircled around her (the Shekinah), everything (every symbol below in Malkuth) reflects the (zodiacal belt) above. The Scripture says, "There (in Malkuth) the tribes used to go up, the tribes of יה Jah a testimony to Israel, to give thanks unto the name of יהוה Iod-Havah.” (Psalm 122:4). The words, “there the tribes used to go up,” refer to the twelve שבט Shebot tribes (twelve zodiacal constellations), which are the twelve (physical and psychological) boundaries (or zodiacal signs) below (in Malkuth).

“The tribes of יה Jah” It has been explained that this is because Iod-Hei, is assuredly “an appointed (alchemical) practice (also: 'a testimony') for Israel.” And therefore, "Ha-Reubeni הראובני and “Ha-Shimoni השמעני" (with Hei as prefix and Iod as suffix)" (Numbers 26:7, 14). This is because each individual contains Iod-Hei (יה Jah). But assuredly it is so, because (Daath) the uppermost holy Tree (of Knowledge), has stamped them with its seal. And this has been explained according to the scripture:

"The Logos, Dabar Iod-Havah דבר־יהוה (from Chokmah) came directly into Ezekiel, the son of Buzi, the priest of the (element) earth, the כ-שדים Kashaddaim by the river Chebar; and שם יד־יהוה the Iod of the name IAOH יהוה was there upon him. And I looked, and, behold, a (רוח סערה Ruach Soreh) tempestuous spirit (אל שדי El Shaddai) came out of (the kingdom of כ-שדים the Kashaddaim in) the north, a great cloud, and a fire infolding itself, and a brightness was about it, and out of the midst thereof as the color of amber, out of the midst of the fire. Also out of the midst thereof came the likeness of four living creatures. And this was their appearance; they had the likeness of Adam." - Ezekiel 1: 3-5 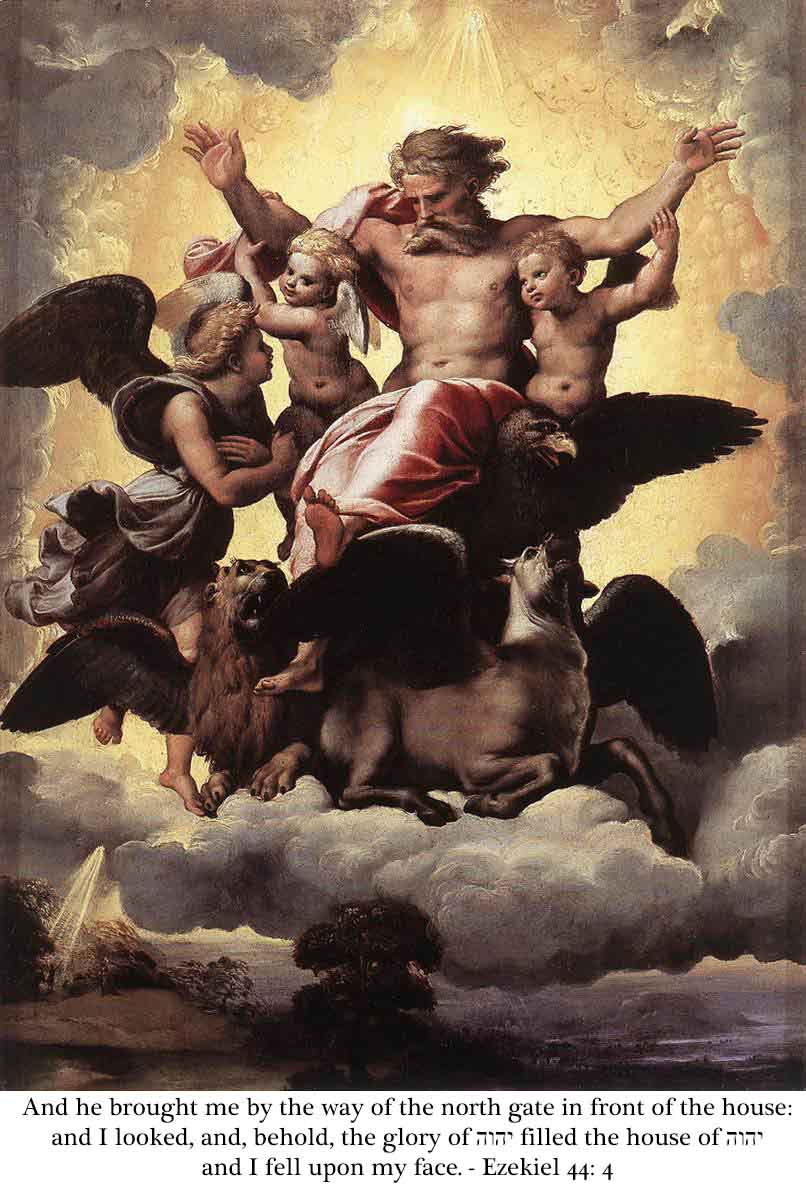 (In Daath, the tree of knowledge) Michael (fire is Pingala אב Abba and) is to the right. Gabriel (water is Ida, אד Ad and) is to the left. Uriel (אור Aur יאל i-El, the light of the Iod of God) is to the front. Raphael (Air) is to the back (the wings, the lungs). And the Shekinah is on top of them. Two (וה Vav Hei, namely, man and woman, east and west) are (united) on this side (in Yesod-sex), and two (Iod Hei, namely, יה Jah, Abba and Ima, north and south) are (united) on that side (Daath, the throat), and she (the Shekinah), is in the center (in the spinal medulla). Likewise, it is on (Malkuth or אדמות Adamoth) the earth below. Two are on this side (of the man), and two are on that side (of the woman). And יה Jah Iod-Hei (Abba and Ima) are in (Daath) the center.

Since the two banners traveled, what does the scripture say? "Then the Tent of Meeting shall set forward with the camp of (the priests) the Levites..." (Numbers 2:17). And following them were the other two (of the priestesses), which compose the four camps in the four directions of the world, for a total of twelve. This is below it is the same as above (because each of the four elements comprises 3 zodiacal signs).

From Hei (the Ain Soph) come south and north (pillars) and that (Vav in the central pillar) which is in between (the second triangle and between the central pillar of the tree of life), from Iod (Kether in the first triangle, the light elongates towards the) east (Tiphereth, forming the Vav), and from Iod-Hei (which are Abba and Ima Elohim united in Daath, come) south and north (Geburah and Gedulah, which) depend on them, Vav (is Tiphereth) in the center (of the second triangle and the center of the central pillar). And that (Vav) is a male child (Moses or willpower that emerges from Yesod). And for this reason (in the second triangle and in the central pillar), it (Tiphereth) is between north and south, therefore, we are taught that whosoever (when practicing sexual alchemy) places his bed (מיטתו Mitetu: that is, מי Mi, the one above; טית Tet, the other ו Vav or serpent below in Yesod) between the north (אל-הים El-HaYam, the father) and the south (אלה-ים Elah-Yam the mother) shall engender (בנין דכרין Benin Dekarin – Rams children) male children (Giborim, solar bodies), because this male child (Moses or willpower that emerges from Yesod), is situated between (Geburah and Chesed and in between the central pillar) north and south. So, from (Aries, דכר Dekar, the Ram, the Head) the supreme Hei (of השמים Ha-Shemayim, the heavens), came out (המים Ha-Mayim, that is Mi and Mah) north and south. The (Shin, the fire of the) male child (משה Moses), is between them; in the mystery of Iod-Vav-Hei, the last Hei is (our physicality, Malkuth, the) west.

Consequently, the south (Geburah) holds to the east (Tiphereth), where the sun rises (from Yesod), and depends on it.

Therefore, we are taught that the aspect of Aba (in Daath), bonds and depends on the supreme Chesed (the north). And on the side of Ima,  Hei, Geburah (the south) depends. Likewise, everything holds to each other.

The corners of the altar (in Yesod) were also circled in that manner. It comes to (Geburah) the south-east corner, because the south is strengthened in the east, which is the sunrise, and the strength of the sun only stays at the start, the north-east (Chesed). Since after the south (Geburah), received the strength of (sunrise) the east -  illuminated to the north (Chesed), and the north (Chesed) was included in the south (Geburah) because the left (Geburah-Isaac) is combined in the right (Chesed-Abraham).

The north-west, since (Malkuth) the west that is in the last Hei, receives (the waters) from the north (Chesed). And therefore the north (Abraham-Chesed) moves west (to Egypt), (Abraham travels then to) the south-west (Abraham) moves to join in the south, since (the fires of Geburah) the south is dependent on the east (Tiphereth). And its strengthening (fire), moves first; the west (Malkuth) moves to grasp the (fires of Geburah in the) south. That is the meaning of the words: "and his right hand (Chesed) embraces me (Malkuth, from Tiphereth with fire)" (Song of Songs 2:6); right (Chesed) meaning south (Geburah). Therefore, it (Tiphereth) nourishes from two sides, from the north (Chesed-Water) and south (Geburah-Fire). That is the meaning of, "His left hand (Geburah) is under my head (the first triangle), and his right hand (Chesed) embraces me (Malkuth from Tiphereth);" left (hand) is (touching) north (east) and right (hand) is (touching) south (west).

And this mystery I learned: that the Holy One יהוה, blessed be He, places His bed (מיטתו Mitetu: that is, מי Mi, the one above; טית Tet, the other ו Vav or serpent below in Yesod) from north and south, and it is certainly attached to the son (Tiphereth). And therefore people (when practicing sexual alchemy) should place their bed between north (Chesed-water) and south (Geburah-fire). And so my father taught me, that one is given (Giborim) male children because he concentrated on the complete, whole supernal Faith, the Holy One, blessed be He, Who is situated (in the heart, Tiphereth) between north and south, and the Congregation of Israel, situated between north and south. Most certainly he shall have male children (solar bodies).

And in all (alchemical) things, we must show a deed, in the likeness of the higher. As one manifests a deed below, likewise it awakens on him above. This has been explained. Rabbi Pinchas heard this explanation and kissed Rabbi Elazar and cried and smiled. He said: Blessed is my lot in this world and the World to Come.