In the words 'And formed Adam' [וייצר ve-yetsar “and formed” is spelled with two letter Iods] is expressed the mystery of the formation of Adam from the right and left [יד Iod arm, hand] sides of the Sephirothic tree of life. Adam is composed of two natures, the animal or lower soul [נפש Nephesh] and the spiritual or higher soul [נשמה Neshamah], and this because the former [that is Geburah contains Gedulah] is necessary to the development of the latter [in Malkuth]. It is [נפש Nephesh, the animal soul ] the lower consciousness of Adam that excites [Malkuth, our physicality] the lower female principle. 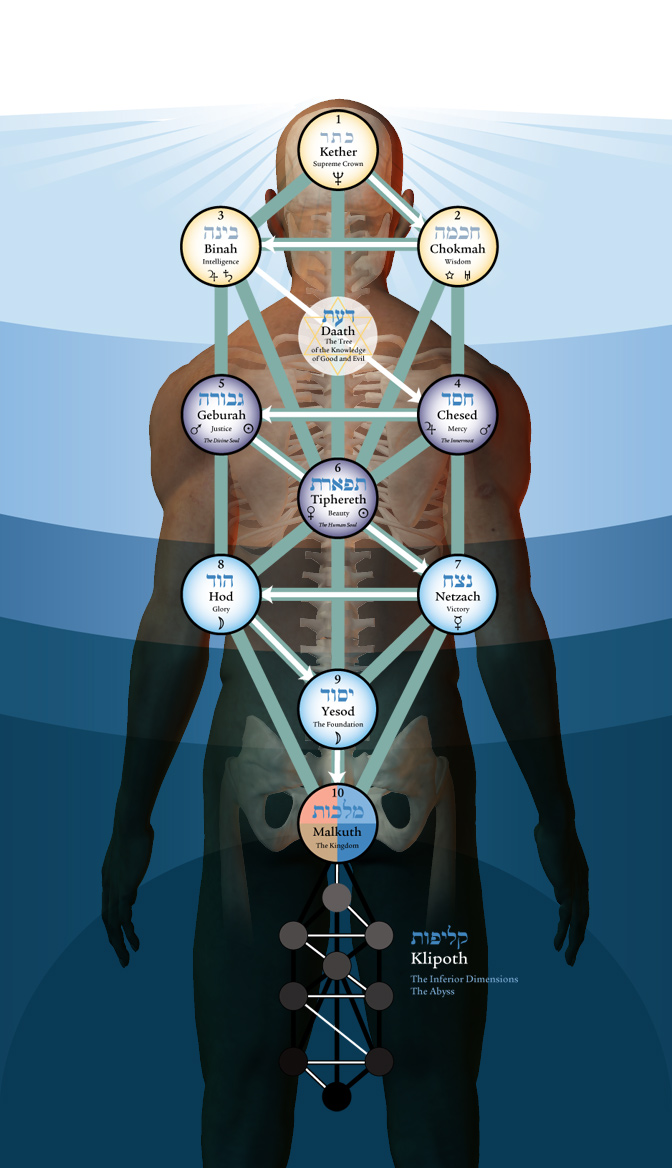 The Kabbalistic meaning of this is that [within the spinal column, the Vav of וייצר ve-yetsar is contained the cerebral-spinal male sexual fluid, where the רוח אלהים Ruach Elohim is hovering, which is] the [first יד Iod arm, hand of the] north [Gedulah, the צ Tzadik, the righteous Chesed, the ר Reish, or head of Adam] seeks attachment [through the second יד Iod arm, hand of the south, the lingam of Gibor, the איש Iysh male of Geburah, the blood or אש Esh fluidic fire] with the [ה Hei] female [fluidic fire of אדמה Adamah] that symbolizes evil; and therefore she [Malkuth, אדמה Adamah, the female fire principle] is called אשה Ishshah, a term compounded of two words, אש Esh [fire] and ה Hei, signifying the yoni or female fire principle.

The higher [נשמה Neshamah] and lower [נפש Nephesh] souls [of the רוח אלהים Ruach Elohim, the Monad] cannot become united and harmonized so long as sexuality and carnal desire [Lilith and Naamah] are dominant. The term Adam has already been explained, that at first it is designated androgynous Adam, but afterwards became sundered and separated.

We will now explain further the esoteric meaning of the phrase:

"From the dust of  אדמה Adamah the ground."

When a woman marries she takes the name of her husband, therefore he [in Geburah, the south] is called איש Iysh and she אשה Ishshah.

He [in Gedulah, the north] is designated צדיק Tzadik [righteous] and she צדיקה Tzadika [righteousness].

Moreover, it is written:

“Thou shalt not plant thee [in Tiphereth, the east] a grove [אשרה Ashera] of any trees near unto [Yesod] the altar of [Binah] Jehovah thy Elohim, which [אשר asher] thou shalt make for thee.” - Deuteronomy 16: 21

Why is it not permissible to plant [in Tiphereth, the heart] a grove [אשרה Ashera] of any trees near unto [Yesod] the altar of [Binah] Jehovah Elohim? In reply we say that the word אשר asher [who, which] designates the husband [Tiphereth] and אשרה Asherah [grove], the wife [Malkuth]; as it is written:

“And the king [יאשיהו Josiah, Yeshiyao or איש male-fire of יהו IAO] commanded the high priest Hilkiah [חלק יהו, who is Chesed, the other section of IAO, in the central nervous system], and the priests of the second order [in Tipheret, the grand sympathetic nervous system], and the keepers of the threshold [in Yesod, the parasympathetic nervous system], to bring forth out of the temple [Malkuth] of Jehovah all the [mental graven images, idols or psychological] vessels that were made for בעל Baal, and for אשרה Asherah, and for all the host of heaven, and he burned them without Jerusalem in the fields of the Kidron, and carried the [עפר aphar] ashes of them unto Beth-el.” - 2 Kings 23: 4

The esoteric explanation of the words בעל Baal and אשרה Asherah is this: the altar designates her, the Shechinah, or divine wife [of Binah, the Third Logos in the heart], and therefore it is forbidden to raise or build any other altar and present a wife to Abba Elohim - Binah beside her [the Shechinah, Aima Elohim]. Note that the idol [Hasnamuss, Marut] worshippers of the [tenebrous] sun are termed worshippers of בעל Baal, and the adorers of [Lilith] the [black] moon, the idol adorers of אשרה Asherah.

“I saw Orhuarpa, the founder of the mysteries of the tenebrous sun [Klipothic Tiphereth] in Atlantis. I saw בעל Bael [and the Baalim of Klipoth], the contrary pole of the luminous angel Adonai [Malkuth].” – Samael Aun Weor

The wife is called אשרה Asherah, derived from the word אשר asher, designating her husband. Why then are not they used any longer to distinguish a man and his wife, and also the celestial husband and wife? Because the word אשרה Asherah comes from אשר asher in the same sense as found in the words:

“And Leah said, באשרי basheri [Happy] am I, for the daughters will call me blessed אשרוני asheroni: and she called his name אשר asher.” – Genesis 30: 13

Presently, the altar [wife] of Jehovah Elohim on the earth [Malkuth] is not honored and blessed by the [Baalim or Hasnamussen] idol worshippers, but despised, therefore the terms אשר asher and אשרה Asherah are not longer applied to the altar symbolizing the celestial husband and wife, nor to a man and his wife; and this is the signification of the words:

That is. thou shalt not present to [thy Inner אשר asher] Elohim any other wife [אשרה Asherah] than the legitimate one [the Shechinah, the Kundalini ] , the altar of Adamah [the ground], as it is written:

It is also written:

“And breathed into his nostrils their [נשמת חיים Neshamot Chayim] living breath.”  – Genesis 2: 7

Meaning that the earth [physicality] was then made fruitful as is the female by the male, for it is animated with [נשמת חיים Neshamot Chayim] life-giving principles and force.

“Ye shall know them [the נפש Nephesh of men and women] by their [נשמת חיים Neshamot Chayim, spiritual] fruits. Do men gather grapes of thorns, or figs of thistles?  Even so every good tree brings forth good fruit; but a corrupt tree brings forth evil fruit. A good tree cannot bring forth evil fruit, neither can a corrupt tree bring forth good fruit. Every tree that brings not forth good fruit is hewn down, and cast into the fire. Wherefore by their [נשמת חיים Neshamot Chayim, spiritual] fruits ye shall know them.” – Matthew 7: 16-20

Moreover, Adam is endowed with a two-fold nature and thus able to develop the lower self, by which his earthly frame is animated.

“And the rib which Jehovah Elohim had taken from Adam, made they a woman, and brought her to Adam.” - Genesis 2: 22

The full divine [androgynous] name Jehovah Elohim is here used, and are the father and the mother [אשר asher and אשרה Asherah] who prepared her [Eve] and brought her unto Adam. The word 'rib' denotes the mystery expressed in the words:

“I am black but beautiful, O ye daughters of Jerusalem, as the tents of Cedar, as the curtains of Solomon.” – Song of Songs 1: 5

This is because before marriage a woman resembles the non-luminous mirror that becomes radiated after the marital union for which her father and mother have prepared her, and so the scripture adds: ‘and [אשר asher and אשרה Asherah] brought her to Adam' from which we infer that the duty of the parents of a bride is to give her into the keeping and care of her husband according as it is written:

“And let the girl's father say to the responsible איש Iysh man, I gave my daughter to this איש Iysh man for his אשה Ishshah wife, but he has no love for her.” - Deuteronomy 22: 16

From that time she goes with her husband into his house that is now hers, and it is his duty to consult with her on all matters appertaining to domestic affairs.

Therefore it is written:

“And he lighted on a certain place, and lodged there, because the sun had set. And he took one of the stones of the place, and made it his pillow, and lay down in that place.” – Genesis 28: 11

This means that Jacob took the permission he enjoyed:

“And it came to pass in the evening, that he took Leah his daughter, and brought her to him. And he went in unto her.” - Genesis 29: 23

And therefore from these words we infer that the conjugal union should be the outcome of consent and permission on the part of the wife after listening to her husband's voice of loving affection. If, however, there be no feeling of reciprocation, no conjunction ought to take place, for conjugality should always be voluntary and unaccompanied with unwillingness.

'And he lodged there all night because the sun had set,' teaching that conjugal duties should always be nocturnal. '

And he took one of the stones of the place, and made it his pillow,' meaning that though a king possesses golden couches and fine robes, he prefers the bed [foundation] prepared by his beloved wife, though composed of stones [bones]; as it is written, 'And he laid down in that place to sleep.'

Note what is further written:

These were the words of Adam to draw Eve unto him and incline her to enter into nuptial union and thus show that they are one and now undivided and unseparate in a higher sense than before. Then he begins to praise her that there is none like unto her, that she surpasses all other beings, the one deserving the name of woman; as it is written, 'She shall be called woman, words that pleased her,' as it is written:

“Many daughters have done virtuously, but thou excellest them all.” – Proverbs 31: 29

“Therefore shall a איש Iysh man leave his father and his mother and cleave unto his אשה Ishshah wife and they shall be one flesh.” – Genesis 2: 24

That is to say that Eve was induced by these loving words of Adam to consent to enter into marital relationship with him and as soon as this was effected we read:

“And the serpent was wiser than any animal of the field which Jehovah Elohim had made.” – Genesis 3: 7

In the moment that Adam and Eve became thus associated, the lower soul [נפש Nephesh] became excited and aroused by sexual desire in which it delights, as scripture said:

“And when the woman [sexual organ] saw that the tree was good for food she took of the fruit of it and did eat.”  – Genesis 3: 6

This indicate that hitherto their love had been angelic and pure, but was now changed into sexual desire first arising in [their physicality made of bones and flesh] the woman [Malkuth] and leading them to conjugal relationship, for a woman [Eve, symbol of the sexual organ] is the inspirer of love whilst man [Adam, symbol of the brain] is the receptacle of it and in this resembles angelic beings whose actions are determined by pure love unblended and unmingled with sexual desire.

Said Rabbi Eleazar: How can this be, will [נפש Nephesh] the lower [animal] soul with its passions and emotion remain attached to the female [נשמה Neshamah, spiritual soul] on high?

RABBI SIMEON answered and said: “The lower or passionate soul [נפש Nephesh] is always [through the רוח אלהים Ruach Elohim, Chesed] striving to imitate the actions of the higher [נשמה Neshamah, spiritual soul], with the difference that what is spiritual and pure it changes into carnal and impure. The higher soul [נשמה Neshamah] takes its origin [in Gedulah] from the right side of the Sephirothic tree of life, but [נפש Nephesh] the lower [in Geburah] from the left side, and is embodied in [Malkuth] the female and becomes unified in it, as it is written:

Until now we have discoursed on a subject, exceedingly esoteric and unknown to ordinary minds, but now we will speak more clearly so that every one may comprehend and understand them.”

On hearing this, the student novitiates expressed their great desire to learn more of this mystery of sexual alchemy.