Zohar: And the Darkness Was Called Lilith

And Elohim said: Let the waters under the heaven be gathered together unto one place, and let the dry land appear: and it was so.

And Elohim called the dry land Earth; and the gathering together of the waters called he Seas: and Elohim saw that it was good.

And Elohim said, Let the earth bring forth grass, the herb yielding seed, and the fruit tree yielding fruit after his kind, whose seed is in itself, upon the earth: and it was so.

And the earth brought forth grass, and herb yielding seed after his kind, and the tree yielding fruit, whose seed was in itself, after his kind: and Elohim saw that it was good. 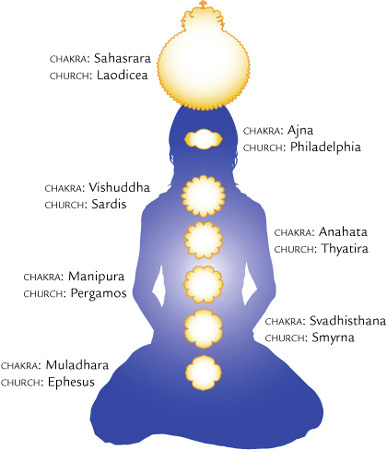 On the third day, it is written twice, "And Elohim saw that it was good" [Genesis 1:10-12]. This day is associated with two sides [two columns, Jachin and Boaz]. Elohim said to each side "that it was good", thereby reconciling the discord between them. This is why: "And Elohim said" appears twice in it. Herein lies the secret of the name [iod-Havah] that is formed with the four letters [iod-Hei-Vav-Hei] inscribed and engraved. These can add up to twelve letters that represent the four [lower tattva-chakras] images [Water אדם Adam, Fire ארי Lion, Earth שור Ox, Air נשר Eagle] on all four sides of the holy throne [central nervous system],

"Let there be lights" According to the Zohar, it is at this point in the process of Creation that the children's disease called croup was brought forth into existence. This disease is governed by לילית Lilith, a particular negative female Spirit whose name we do not pronounce. She has the ability to remove [the archetypes] children [of Initiates]—Heaven Forbid--from our physical realm [into Klipoth] if there is an opportunity to do so. Through the Hebrew letters [Conjuration of the Seven], we draw the power of protection for our [archetypes] children.

At first, מארת Me'orot lights [is written] with defective spelling, that the children's disease, croup [diphtheria], was created.

The worst genres of sicknesses are those which are engendered by karma. Diphtheria is the fruit of fornication from past lives. – Samael Aun Weor

The מארת Merot curse [karma] of יהוה is in the house of the wicked [fornicator]; but He blesses the habitation of the righteous [chaste ones]. Proverb 3: 33].

When [in the first day] the primeval light [Yehidah] was as yet invisible or unmanifested, a קליפה Kliphah [sheath or covering of חשך choshek - darkness] formed itself around it. This Kliphah expanded and produced another Kliphah [לילי, לילית Lilith] that extended itself, it ascended and descended [to Briah] until it reached the small face [the Spirit, Chesed], with which it wished to be united and bear its form permanently. So, when [Yehidah] the Holy One, blessed be He, created [רוח ruach, the Spirit, the Chesed of] Adam [in Briah], He devided it [the רוח ruach, the Spirit, Chesed] from it [the first Kliphah, חשך choshek - darkness] and the [second] Kliphah [Lilith] descended below, in order to amend it [the רוח ruach, the Spirit] in this world [of Malkuth],

When [the Kliphah, Lilith] saw [the lunar creative force] Chavah [Chaiah, life of Malkuth] clinging to the side of [the Neshamah of] Adam [Chesed], who [in Briah] represented the beauty of [the light Yehidah] above, and saw in them [Chesed and Geburah] the complete [archetypical] form, it flew up from its place [Malkuth] and wanted to cling to the small faces [Chesed and Geburah] as before. However, the guards [Cherubim] at the gates [of Eden, Yesod] did not allow. The Holy One, blessed be He, scolded it [Lilith] and cast it into the depths of [Yesod] the sea [in Klipoth].

The Kliphah [Lilith] sat there [in Yesod, Klipoth] until Adam and his wife sinned [fornicated]. Then the Holy One, blessed be He, took the Kliphah [Lilith] out from the depths of [Yesod, Klipoth] the sea. It [the Kliphah, Lilith] took control over [the psyche of] all those babies [offspring of fornication], the small faces [lustful egos] of people, who deserve punishment for the sins [of fornication and adultery] of their fathers [Adam and Eve, Brain and Sex]. It [the Kliphah, Lilith] wandered around the world, approached the gates of the terrestrial Garden of Eden [Sex], saw the Cherubim guarding the gates of the garden and sat down near the blade of the sword from which it had originally emerged.

When the bright blade [or flaming sword of Lucifer, turned towards the left and right columns], changed [kept the Kliphah Lilith away from the spinal medulla, the tree of life, then the Kliphah] fled and wandered [108 times] around the world and found [psyches of] babies [offspring of fornication] due to be punished. The Kliphah laughed [enjoyed fornication] with the babies and then killed them [for in the day that thou eatest thereof thou shalt surely die]. – Genesis 2: 17. It did this [in Yesod] during the waning of the moon, as its light [Hod] diminished [through fornication]. This is "Me'orot [lights, without the Vav, the spinal medulla, the tree of life], When Kain [the Mind, which physical's vehicle is the brain] was born, [the Kliphah, Lilith] was unable to cling to him [the רוח ruach, the Spirit, Chesed, whose throne is the Central Nervous System], but later [when Kain, the mind, killed Abel, the consciousness, through fornication] it [the Kliphah, Lilith] approached him [the רוח ruach, the Spirit, Chesed], and [through Kain, the sinful mind] manifested to him earthbound spirits and flying spirits.

Adam [the brain, through fornication] had intercourse with those female spirits for 130 years until [the mind as Tubal Kain's sister] Naamah [evil beauty] came. Because of Naamah's beauty, she led the [psyche of the] Beni Elohim, Aza and Azael [lunar creative psyche forces of Yesod and Hod] astray. She bore them [Incubi and Succubae]. Evil spirits and demons spread out from her into the world. They wander around the world during the night, deriding human beings and causing nocturnal pollution. Wherever they find men [and women] sleeping alone in their own homes, they hover over them and cling to them, arousing lustful desires [masturbation] and having offspring by them.

When, however, the [creative force of the] moon is increasing [through chastity] , the letters of the word meoroth [מארת curse] are changed into the term [אמרת] imrath [the word], as it is written:

Psalm 18: 30: "אמרת Imrath יהוה, the word of iod-Havah, is refined [through sexual alchemy]" as gold tried in the fire. "He is a shield and buckler to all them that [through sexual transmutation] put their trust on him," a buckler and shield [of light] against evil and malignant [Incubi and Succubae] spirits who roam and fly about in the world during the decadence of the moon, to such as those whose trust is in the Holy One.

"Azazel was the king Solomon., Actually, the Bodhisattva of Azazel is fallen, but it is logical that, in the close future, this Bodhisattva will rise from the clay of the earth again." - Samael Aun Weor

King שלמה - שילמה Solomon [as שילה - משה Moses, Causal Body, Tiphereth] penetrated [the psyche of Aza and Azael] the depth of the nut [Klipoth, Naamah and Lilith], as it is written:

Solomon took hold of the shell [Kliphah] of the nut and looked at all its [lunar] layers. He came to realize that the main pleasure of the [incubi and succubi and all egotistical] spirits in the shell of the nut was just to cling to [Aza and Azael, the archetypes of] human beings and defile them, as it is written:

"And the delights of the sons [archetypes] of Adam [in Klipoth], incubi and succubi [Hebrew שדות שדה shiddah shidot]" [Ecclesiastes 2:8].

It was necessary for the Holy One, blessed be He, to create and supply the world with everything, so everything [including Klipoth]. Just as the inner part of the nut is surrounded by many layers of shells, all the worlds are similarly above and below.

From the beginning of the secret of the supernal point [Iod, Atziluth] to the end of all grades, they are all intertwined, so each and everyone is a Kliphah to the other.

From here on, [Briah, Yetzirah, Assiah] each one expanded within the other and became enclosed by one another until enclosed one another. One was the inner part and the other the outer layer. Though one is a garment, it has also become the inner aspect of another grade .The same thing occurred below [In the Microcosmos, Adam]. In this image, the human being exists in this world with an inner part and an outer shell [the body], which corresponds to [Chesed and Geburah] a spirit [Ruach and Neshamah] and a body [Malkuth]. All this is for the perfection of the world.