Regarding Nimrod, the Giborim, it is written: 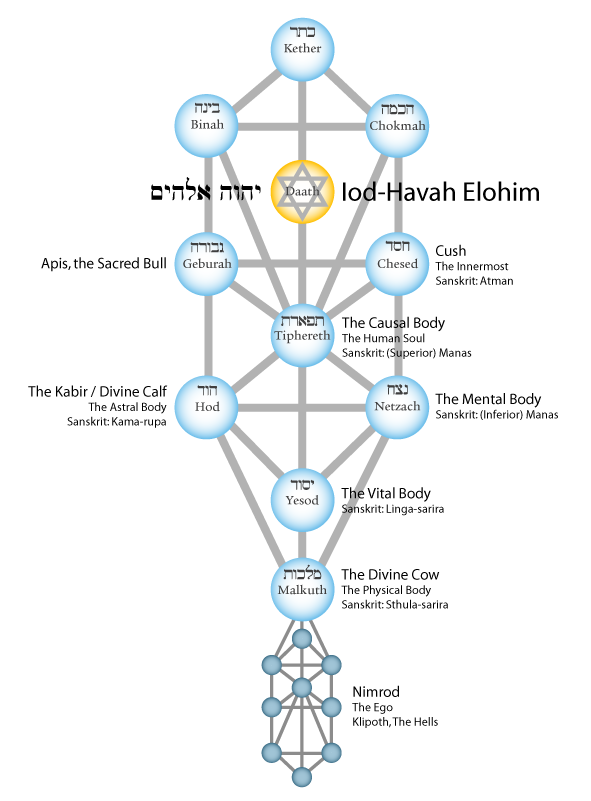 Nimrod used [built the solar bodies] the clothes of Adam to gain strength. He acquired authority and renown by wearing the primogenital robes and garments of Adam [these clothes are the astral, mental and causal solar bodies, which are the outcome of the Light; these garments conceal the light of Iod-Havah within the physicality] and [with the golden calf or ego of mythomania very alive] was able thus to corrupt the minds and habits of mankind in his days.

Nimrod was concerned only with the material world [tower of Babel], without any regard or consideration for the spiritual essence of reality. This [Klipothic power of tongues] is [Tohu VeBohu, confusion, and] considered to be a form of idol worshipping. It is falling under the delusion and control of the physical world.

A deeper awareness for the spiritual essence of life is awakened within us by the following passages, so that we are not controlled by [Maya] illusion.

Said Rabbi Eleazar: "Nimrod [the rebel Giborim] first led souls into error and caused them to fall into idolatry. Having possessed himself of the garments [solar bodies] of his ancestor Adam, he usurped rule and authority over his fellows who, submissively yielding to his tyranny, made him the object of their worship and adoration [by proclaiming himself an Elohim, a Ruler of the World, so all other human beings had to follow him]. Why was he called Nimrod? Because he rebelled against Iod-Havah, the most high King of Heaven, and brought about a revolt in both worlds, the celestial and terrestrial. Becoming regarded as an universal sovereign and succeeding in wielding the minds of mankind, he induced them to cease and discontinue their allegiance to their Lord and creator [thus he rebelled against the King of Kings and Lord of Lords, that is, against the head of the White Lodge, and also against his temple in Malkuth]."

Said Rabbi Simeon: "Initiates of the secret doctrine recognize in the expression 'Adam's clothing,' a very deep and occult mystery, the explanation of which is never divulged or imparted save to advanced students of the hidden wisdom."

“And Adam [cerebrospinal fluid] called his wife's name Eve; because she [his genitalia fluid] was the mother of the living [Abraham, Isaac, Jacob]. Unto Adam also and to his wife did Iod-Havah Elohim make coats of skins [astral, mental, causal solar bodies], and clothed them.

“And Iod-Havah Elohim said, Behold, Adam [with solar bodies] is become as one of us [Elohim], to know good and evil: and now [his animality has to die], lest he put forth his [Iod] hand, and [with the animal ego very alive] take also of the tree of life, and eat, and live for ever: Therefore Iod-Havah Elohim sent him forth from the [upper] Garden of Eden, to till [psychologically, through meditation] the ground [Adamah, Malkuth] from whence he was taken.

“So he [Iod-Havah Elohim] drove out [the terrestrial, egotistical] Adam; and he placed at the east of the garden of Eden Cherubims, and a flaming sword which turned every way, to keep [any Giborim, Nimrod, Marut or Hasnamuss from] the way of the tree of life.” – Genesis 3: 20-24

So, we Gnostics profoundly worship the sacred bull Apis [in Geburah], husband of the Divine Cow (the Shechinah, Divine Mother Kundalini in Malkuth) and [the Astral Light] the Calf or Kabir [the Prophet of Hod]. Yet, we reject the Golden Calf [Nimrod] the Idol of the Giborim or Baalim from Klipoth. Amen.

"For [in Binah] יהוה [Iod-Havah] your אלהי Elohi [is] אלהי Elohi [personal, inner God] of אלהים Elohim [Gods], and [in Malkuth] Lord of lords [אדני האדנים Adonai Adonim], a great God [in Gedulah], a גבר [Gibor, mighty one in Geburah]..." - Deuteronomy 10:17

Nimrod was a descendant of Noah in the Kali Yuga or dark age of Atlantis. He became an arrogant Malachim [Tiphereth], that is to say, a fallen king, an Amalekite, or Marut who declared himself to be a Gibor, a warrior of Geburah [the image of Geburah is a bull], he presided over the construction of the mythical Tower of Babel. Nimrod was also a renowned hunter, though his choice was the Nephesh [animal soul ] of intellectual animals and humans, whom he enslaved with his rhetoric upon capture. Whatever his prey, his name became synonymous with Marut, Hasnamuss, Giborim.

The Sacred Cow in the Bible

And they laid יהוה ארון-the ark of Iod-Havah upon the cart, and the coffer with the mice of gold and the images of their sores. And the cows took the straight path that leads to בית שמש the House of the Sun [Tiphereth]; they [the cows] went [from Malkuth] along the highway; they were mooing as they went, and did not turn aside to the right hand or to the left; and the lords of Palestine went after them to the border of בית שמש the House of the Sun [Tiphereth].

This means that by transporting the Ark [by practicing sexual alchemy], we fill our heart [coffer] with Christic Solar Energy; that is, the mice [our lunar spiritual animal instincts] are transformed into gold [solar human intuition], thus, the Tzalem [golden images; fiery solar forces] which are trapped within our karmic sores, are liberated. Note also that the word mouse comes from the Sanskrit muss, which is found in the word Hasnamuss (the complete meaning of the word is explained in Hanuman: The Perfect Hero [גבר Gibor].

And they of בית שמש the House of the Sun [Tiphereth] were reaping their wheat harvest in the valley: and they lifted up their eyes, and saw the ark [in Yesod], and rejoiced to see it.

And the cart hath come in unto [Yesod] the field of [יהושע בית־השמשי = Yeshua Bet Shemesh] the Savior from the House of the Sun [Tiphereth], and stood there [in Yesod], where there was a great stone, and they cleave the wood [of the tree of knowledge] of the cart, and the [fire of the] cows [symbol of the Shechinah within their physicality] they have caused to ascend [through their spinal medullas by means of sexual magic] as a burnt-offering to יהוה Iod-Havah [in Daath]. - 1 Samuel 6: 11-14

The meaning of this difficult scriptural passage is expounded by Rabbi Joseph. We learn that while they carried the Ark, the cows were able to moo—although this gift vanished as soon as they no longer performed this work.

Rabbi Abba explains that a psalm of David referring to a "new song", refers to a time when the psalm or Holy Spirit or Nukva—that is, our physical world, also known as Malkuth—will glow with the light of the sun, which itself is a coded reference to the concept of Messiah. It is after this that the Resurrection of the Dead takes place, a time when the world will be renewed and set free from death's rule.

In the Bible as well as in Hinduism, the cow is a symbol of the feminine strength of the sephirah Binah within the physical world, the sephirah Malkuth. The upper left side of the tree of life is ruled by the sephirah Binah, whose name in Atziluth is Iod-Havah Elohim. The creative fire of Iod-Havah Elohim abides in Schamayim and Mayim, the upper and lower waters. Schamayim is the masculine water; it is Elohim Gibor or masculine solar fire of the sephirah Geburah within the cerebrospinal fluid. Mayim is the solar, feminine fire of Malkuth that sits in Yesod within the genitalia fluid, and thus is the wife of Shiva, Binah, Saturn. Thus, esoterically, bulls are symbols of the sephirah Geburah, and cows are symbols of the sephirah Malkuth; whereas calves are symbols of Hod, the astral light, whether ultraviolet (superior) or infrared (inferior). Ultraviolet astral light is the Zohar, the splendor of Christ, the prophet of Hod; whereas infrared astral light is the "confusion of tongues," Nimrod, the Golden Calf, the Minotaur from Klipoth.

In view of this, bulls, cows, and calves are symbols related with fiery spiritual energies. Among the tattvas, beef is related with tejas (fire), which one absorbs when practicing sexual magic, which in Judaism is the first meal of the Shabbat (Saturn, Binah). The Shechinah is the internal energy of red meat that is represented in our physicality (Malkuth) by the sacred cow. So, Malkuth, the cow, our physical body, absorbs the Light of Binah (Iod-Havah Elohim, the Creator) through the sephirah Geburah, whose image is the bull.

The Torah's parchments are usually made from calfskin, a symbol of the astral light (the sephirah Hod). Thus, the image of a mooing cow reveals the activity of the sexual fire of the Logos, rising from the sephiroth Malkuth and Yesod towards Daath in the throat. This is what is meant by the cows transporting the Ark: the two הפרות cows or two Malkuths, husband and wife physicalities, transporting the Archetypes or children of Israel - within their Yesod or their genitalia fluid - from Mizrahim, Egypt, Malkuth towards the promised land.

Through this journey, we have to overcome our animality: innate immoral tendencies and egotistical desires. In other words, through the sacrifice of the bull, cow, and calf—that is, through the sacrifice of the fire contained within our red meat—our physicality and Nephesh, animal nature, our animality—our evil or Klipothic inclinations - Lilith and Nahamah - are completely removed. This is how our inner Minotaur or Nimrod is removed from our human nature through burnt-offerings.