Zohar: A Tree is Known by its Fruit

[In Eden] Adam himself represents the union and blending together of the higher and lower Shechinah [איש and אשה – man and woman], symbolized by the reciting of the Schema, morning [the sephirah Tiphereth] and evening [the sephirah Malkuth].

The union of the two natures in Adam is also referred to in the words, "Bone of my bone [the sephirah Chesed] and flesh of my flesh [the sephirah Geburah]" (Genesis 2:23). We also read that Jehovah Elohim planted Adam, that is, [the archetypes of] Israel [the sephirah Tiphereth], in the sacred garden of Eden [the sephirah Yesod], as it is written:

“And Jehovah Elohim took Adam and put him into the Garden of Eden to dress it and to keep it.” - Genesis 2:15

Jehovah Elohim [the union of El and Elah Yam, god and goddess of the sea]; that is, the heavenly father [the creative energy in the cerebral spinal fluid] and mother [the creative energy in the genitalia fluid]; "garden," the lower Shechinah, the heavenly mother [Kundalini]; "in Eden [in the sephirah Malkuth]"; "Adam," the middle column [Yesod, Tiphereth] of the Sephirothic tree; from which was formed [Malkuth] his wife, and who being his delight should never be separated from him. 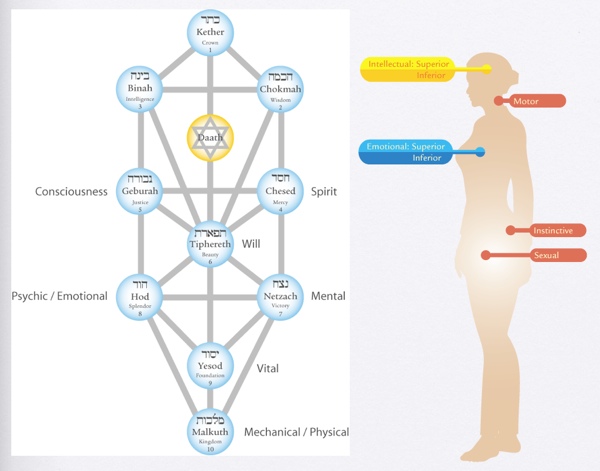 “As the apple tree among the trees of the wood, so is my beloved among the sons. I sat down under his shadow with great delight, and his fruit was sweet to my taste.” - The Song of Songs 2:3

It was then [in Eden] that the Holy One [Jehovah Elohim] planted Israel, who are the [archetypes or] holy branches of the world [of Atziluth], or, in other words, a race [of archetypes] purer and better than those that had formerly existed [in previous cosmic rounds]; as it is written:

“And out of the [Shechinah, the Kundalini of the] ground [Malkuth, his wife] made Jehovah Elohim to grow every [prophet or] tree that is pleasant to the sight and [whose fruits are] good for [spiritual] food.” - Genesis 2:9

“[Nonetheless] Beware of false prophets, which come to you in sheep's clothing, but inwardly they are ravening [fornicator] wolves. Ye shall know them by their fruits. Do men [Gibor] gather grapes [from Geburah] of thorns, or figs [from Malkuth] of thistles?

“A good [prophet or] tree cannot bring forth evil fruit; neither can a corrupt [Hasnamuss or] tree bring forth good fruit.

“Every [Initiate or] tree that brings not forth good fruit is hewn down, and cast into the fire. Wherefore by their fruits ye shall know them.” – Matthew 7: 15-20

"Behold [a corrupt tree is a Giborim], this is גבר Gibor [the male force of Geburah] that [in Malkuth] made not אלהים Elohim his strength; but [as Andrameleck] trusted in the abundance of his riches, and strengthened himself in his vanity. But I [Tiphereth] am like a green olive tree in the house of Elohim: [thus in the Mount of Olives] I trust in the mercy of Elohim for ever and ever." - Psalm 52:7, 8

Jehovah Elohim denotes the [creative] celestial father [in the cerebral spinal fluid] and mother (in the genitalia fluid); "every tree that is pleasant to the sight," the [Kundalini of the] Chaste [Master]; and [fruits] "good for food," the middle [channel Sushumna in the spinal] column consisting [in the tree of life by] the Sephiroth Kether, Tiphereth, Yesod, [united by the Shechinah, the Kundalini], and from which proceed those stores of [solar] food [chakras] by which the chaste Masters are sustained and which, when they become purified and enlightened, will contribute to the life of the world. Then will every one take of the tree of life [the Shechinah, the Kundalini, in the Sushumna channel] in the midst of the garden [spinal column], and eat and live for ever more. 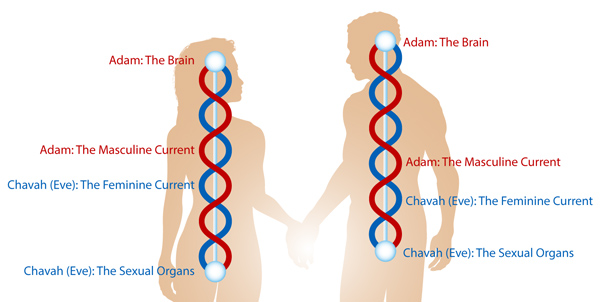 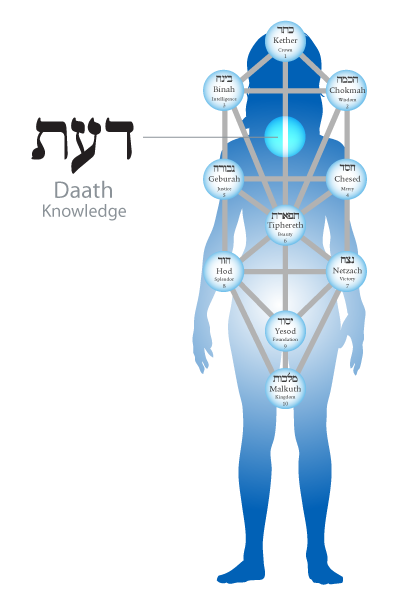 The tree of the knowledge [Daath] of good and evil also symbolizes [the throat, the Word of] those [Masters] whose intellectual faculties are directed only [by the power of Yesod, the Shechinah, the Kundalini in the Sushumna] to phenomenal objects that can be seen and handled, and by whom the presence and operation of the Shechinah [Kundalini] in nature, in the life of nations and in the soul of Adam himself, are unrecognized and ignored; and thus it will be until the times of error and darkness [fornication] pass away; then will they also become proselytes of the divine life of whom it will be said:

“[Adam and Eve who are] Jehovah alone is their leader and there is no strange [Hasnamuss] god in their midst.” - Deuteronomy 32:12

And, human nature transformed and enlightened and purified, mankind will become as a tree that, in its stately form and beauty [Tiphereth], is pleasant to the sight.

“How hath Adonai covered the daughter [the Shechinah] of Zion with a cloud in his anger, and cast down from heaven unto the earth the beauty [Tiphereth] of Israel, and remembered not his footstool in the day of his anger!” – Lamentations 2:1

The tree of the knowledge of Good and Evil occasioned [the archetypes of] Israel to fall into error which they should have avoided and remembered the divine command admonishing them to "Eat not of the tree" of Good and Evil [not to fall into the sexual orgasm of the beasts], on pain and penalty of spiritual death involving loss of union with the Divine [Shechinah or Kundalini], without which there can be no interior enlightenment, no spiritual development.

This command with its twice repeated warning [מות תמות], "thou shall die, thou shall die, [translated as “thou shall surely die”]" refers also to the children [archetypes] of Israel [of those fallen angels] who endured two great calamities, the destruction of the first temple [Tiphereth, the Bodhisattva] and second temple [Yesod, the Bodhichitta], temples [for the archetypes], and the loss of the higher and lower Shechinah [in Daath and Yesod respectively] or manifestation of the Divine presence [Divine Mother Kundalini] in their midst [of their spinal medullas], as expressed and typified in the words:

“And the [Hei or feminine] waters shall fail from the sea, and [because of fornication] the river shall be wasted and dried up,” (Isaiah 19: 5), and which then became resolved in the Ain Soph, the Boundless One [the higher Hei], whence it emanated at first.

And Elohim said, Let the earth bring forth grass, the herb yielding seed, and the fruit tree yielding fruit after his kind, whose seed is in itself, upon the earth: and it was so. (Genesis 1:11)

"The herb yielding seed" are the Angels or Elohim’s spiritual forces called "herb" who cast their seed [Ruach Elohim] into the world [of Briah, creation] from which human beings are born.

"Fruit tree yielding fruit after his kind whose seed is in itself." When the image [צלם tselem] of Chesed, within which are included all the other images [or archetypes of Neshamah] is issued forth [better said, sublimated from Yesod, our sexuality], it is described as "fruit tree [Malkuth, our physicality] yielding fruit [spiritual forces] after its [Ruach Elohim or] kind [that is manifested in מין miyn-Sex-Yesod]

"Whose seed is in itself, upon the earth" These words designate the initiates [trees] who sublimate their seed in themselves on a higher position than the ground, their physicality. Thus, "Whose seed is in itself" is purposely said [to indicate that] Adam must not spill uselessly his seed. As those who live a degenerate life; fornication is therefore unlawful and forbidden.