Foundation of the Zohar

The Holy Name of God

When the upper world [Ain Soph] was filled and became pregnant [by Ain], it brought forth [וה Vav Hei] two children together, a male and a female, those being heaven and earth [Greek: Uranus and Gaia] after the supernal pattern [יה Iod Hei]. The earth [Gaia] is fed from the waters of the heaven [Uranus] which are poured into it. These upper waters however are male, whereas the lower are female, and the lower are fed from the male and the lower waters call to the upper, like a female that [sexually] receives the male, and pour out water to meet the water of the male to produce seed. Thus the female is fed from the male, as it is written והארץ "and the earth [ה Hei / Gaia]" with the addition of ו Vav [heaven / Uranus]. 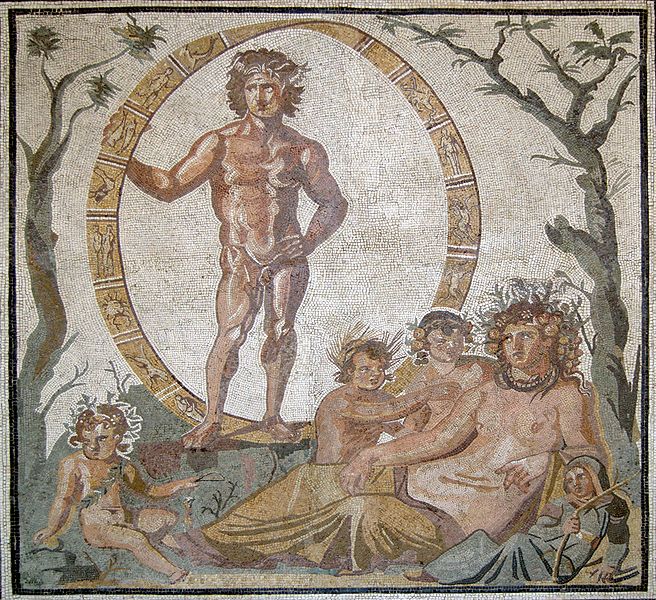 “In the beginning Elohim created the heaven and the earth.

“And Elohim said, Let there be light: and there was light.

“And Elohim saw the light, that [it was] good: and God divided the light from the darkness.

“And Elohim called the light Day, and the darkness he called Night. And the evening and the morning were the first day.

“And Elohim said, Let there be a firmament in the midst of the waters, and let it divide the waters from the waters.

“And Elohim called the firmament Heaven. And the evening and the morning were the second day.” - Bereishit 1-7,8 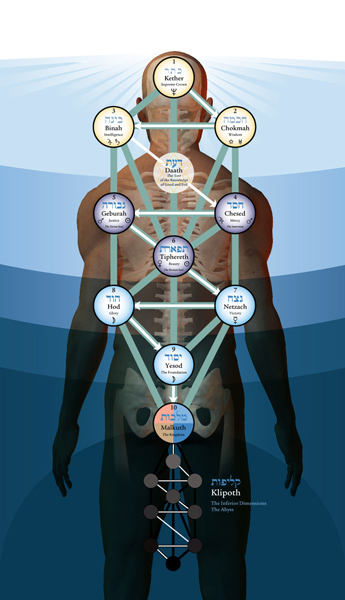 At the outset the decision of the King [Aelohim] made a tracing in the supernal effulgence, a lamp of scintillation, and there issued within the impenetrable recesses of the mysterious [Ain Soph] limitless a [תהו Tohu] formless nucleus enclosed in a ring, neither white nor black nor red nor green nor of any color at all. When he took measurements, he fashioned colors to show within, and within the lamp there issued a certain effluence from which colors were imprinted below. The most mysterious Power enshrouded in the [Ain Soph] limitless cleave, as it were, without cleaving its [בהו Bohu] void, remaining wholly unknowable until from the force of the strokes there shone forth a supernal and mysterious point [י Iod / Kether]. Beyond that [י Iod] point there is no knowable, and therefore it [י Iod / Kether] is called [ראשית reshith] beginning, the creative utterance which is the [ראש rosh: head] starting-point of all. It is written:

“And the שכל [sakal: brain, mind, reasoning] shall זוהר [zohar: shine] like the זוהר [zohar: brightness] of the firmament, and they that turn many to righteousness like the כוכב [kowkab: Mercury, the sexual energy] for ever and ever.” - Daniel 12:3

There was indeed a "brightness" [זוהר-Zohar].

The Most Mysterious [Aelohim] struck its void, and caused this point [י Iod / Kether] to [זוהר zohar] shine. This [ראשית reshith] "beginning" then extended, and made for itself a palace [Yehidah] for its honor and glory. There it [זרוע zeroa] sowed a sacred [זרע zera] seed [semen] which was to generate for the benefit of the universe, and to which may be applied the scriptural words:

Again there was [זוהר zohar] brightness, in that it [זרוע zeroa] sowed a sacred [זרע zera] seed for its glory, just as the silkworm encloses itself, as it were, in a palace of its own production which is both useful and beautiful. Thus by means of this [ראשית reshith] "beginning" the Mysterious Unknown [Aelohim] made this palace.

This palace is called Elohim, and this doctrine is contained in the words:

The Zohar is that from which were created all the creative utterances through the extension of the point of this mysterious brightness.

The word היתה Heithah [was], being a pluperfect [an action completed in the past], implies that the earth had existed previously.

There was snow in the midst of water, from the action of which was produced a slime. Then a mighty fire beat upon it and produced in it a refuse. So it was transformed and became תהו Tohu [chaos], the abode of slime, the nest of refuse, and also בהו Bohu [void], the finer part which was sifted from the Tohu [chaos] and rested on it. The word "darkness" in the text alludes to this mighty fire. This darkness covered the Tohu [chaos], namely the refuse, and was buoyed up by it. The רוח אלהים Ruach Elohim ["Spirit of Elohim"] is a Holy Spirit that proceeded from חיים אלהים Elohim Chaiim [living God, Binah, חיה Chaiah], “hovering over the face of the waters.” When this wind blew, a certain film detached itself from the refuse, like the film which remains on the top of boiling broth when the froth has been skimmed off two or three times. When Tohu had thus been sifted and purified, there issued from it “a great and strong רוח Ruach [“wind”] rending the mountains, and braking in pieces the rocks” like the רוח Ruach [“wind”] that Elijah saw [1 Kings 19: 11, 12].

Similarly, Bohu was sifted and purified, and there issued from it earthquake, as with Elijah:

Then what we call "darkness" was sifted, and there was contained in it fire, just as to Elijah there appeared "after the earthquake, fire"; when what we call רוח Ruach ["spirit"] was sifted, there was contained in it a still, small voice [the Logos]. Tohu is a place which has no color and no form, and the esoteric principle of "form" does not apply to it. It seems for a moment to have a form, but when looked at again it has no form. Everything has a "vestment" except תהו Tohu [chaos].

Bohu [void], on the other hand, has shape and form, namely, stones immersed in the chasm of Tohu [chaos], but sometimes emerging from the chasm in which they are sunk, and drawing therefrom sustenance for the world. Through the form of their vestment they draw sustenance from above to below, and ascend from below above, and therefore they are hollow and strong. These are suspended in the expanse; that is to say, sometimes they are suspended in the expanse when they rise out of the chasm, and sometimes they are hidden, to wit, on the "day of cloud", when they draw waters from the abyss to supply therewith Tohu, for then there is joy that Tohu was spread in the universe.

"Darkness" is a black fire, strong in colour. There is a red fire, strong in visibility; a yellow fire, strong in shape; and a white fire, the colour which includes all. "Darkness" is the strongest of all fires, and this it was which took hold of Tohu. "Darkness" is fire, but fire is not darkness, save when it takes hold of Tohu. The symbol for this is, "his eyes were dim so that he could not see, and he called Esau, etc." (Gen. xxvii, i). Here, too, "the countenance of the evil one was darkened" because it countenanced the evil one. Hence this fire is called "darkness" because it rested upon Tohu and took hold of it; this is the inner meaning of the words "and darkness on the face of the abyss".

“And darkness was upon the face of the תהום [Tohum: abyss; ם the final Mem, Ain Soph].”

Here, too, "the countenance of the evil one was darkened" because it countenanced the evil one. Hence this fire is called "darkness" because it rested upon Tohu and took hold of it; this is the inner meaning of the words "and darkness was upon the face of the abyss."

"Spirit" is the voice which rests on Bohu [void], and grasps it and guides it as required. This is symbolized in the words

"...the Spirit of Elohim was hovering over the face of the waters" – Genesis 1:2

By "face of the waters" is meant stones sunk in the abyss, so called because waters issue from them. Thus each was provided as befitted: