Rabbi Eleazar asks his father Rabbi Shimon to explain a statement made by the great sage Rabbi Akiba about the Pure Marble Stones. Rabbi Eleazar, his son, spoke and said: My father! I along with other students were one day discussing in the college a remarkable saying of Rabbi Akiba to his novitiates: "When you come to places [temples] paved with pure white marble stones glittering in the sunlight, you should not say here is water, water! For then ye will expose yourselves to the danger expressed in the words:

Whosoever practices deceit shall not dwell within my house. Whosoever speaks lies shall not be established before my eyes. – Psalm 101: 7

Suddenly there appeared [Kether] in our midst [as] an aged and venerable looking man who said unto us: "What may be the subject of your discussion." Having informed him thereof, he said: "Truly it was a most dark and abstruse saying and had been a subject of discussion in the celestial college. In order that you may grasp and comprehend its latent meaning, I have come down in order to give you an explanation which has not heretofore been granted or given to any man of this generation. Stones of white and glittering marble symbolize the pure [creative] waters that spring forth [to water the lower garden of Yesod] and take their origin from the fountain [of the upper Eden in Daath]. 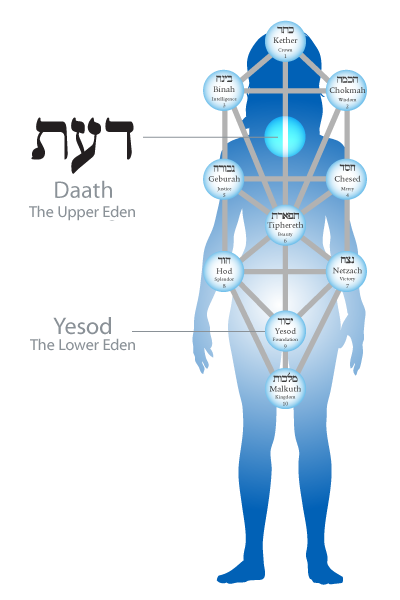 These [lower and upper Edenic waters] are [the cerebral spinal fluid and genitalia fluid] represented [by the two י Iods] at the top and bottom of the letter Aleph (א), they denote the beginning and end [Alpha and Omega] or sum total of created life. The letter ו Vav, which is placed in a diagonal in between them [the two י Iods are Abba and Aima], symbolizes the tree of Life [or spinal medulla] the fruit of which gives immortality.

And יהוה אלהים Iod-Havah Elohim said, Behold, אדם Adam [in Yesod] is become as one of us [in Binah], to know good and evil: and now, lest he put forth his hand [יד - Iod], and take also of the Tree of Life [spinal medulla], and eat, and live for ever.

The two Iods have the same meaning as in the word וייצר veyitzer:

Veyitzer denotes the two [polarities of Elohim Binah in Daath] appearances of the Divine Presence [of the Logic trinity] forming the higher and lower Sephiroth called Chokmah (חכמה wisdom, right side of the brain in Adam and Eve) and symbolized by the two י Iods of א Aleph.

The Sephirah חכמה Chokmah is found at the upper right side [of the Tree of Life] below the Sephirah Kether (crown), thus, [the upper Iod also] represents Chokmah at the beginning [within Abba and Aima in Daath] and [the lower Iod] Chokmah at the end [within Adam and Eve in Yesod].  These are the mysteries of wisdom which are concealed within the supernal חכמה Chokmah, which is below the Supernal Kether.

These two Iods are also comparable to the two eyes from which two teardrops fell from the Sephiroth [from the right upper eye and left lower eye of Chokmah] into the great sea of primal matter.

Why did the teardrops fall?

Because from these two tablets [Abba and Aima who are Iod-Havah Elohim] brought down from on high [Binah], Moses gave the law [the Dharma], which the [idolatrous] children [archetypes] of Israel were unable to appreciate to their advantage [since they did not honor their inner father and mother, Iod-Havah Elohim]. These marble stones were therefore broken and destroyed:

And it came to pass, as soon as Moses came nigh unto the camp, that he saw the calf, and the dancing: and Moses' anger waxed hot, and he cast the tablets out of his hands, and brake them at the foot of the mountain. – Exodus 32: 19

Why did the tablets fall out of the hands of Moses?

Because [the upper and lower Iods from the] the Vav of וייצר veyitzer [that is Binah, the Tree of Life in the fallen Angels] had taken flight and disappeared [from within their spinal medullas].

This then was why Rabbi Akiba said to his students: "When ye behold pavements of pure white marble, ye shall not say they are water, or to be more explicit, do not confound together the law [or Dharma] of the lower nature (the flesh) with that of the higher (spirit), for the one [of the flesh] inflicts death, the other [of the Spirit] gives life. Do not fall into the error of imagining that they are one and the same, lest convicted of inexactitude, ye come under the category of those [hypocritical Pharisees] mentioned in scripture.

Whosoever practices deceit shall not dwell within my house. Whosoever speaks lies shall not be established before my eyes. – Psalm 101: 7

The difference between the two sets of tablets of the law was this; the first that was broken and destroyed proceeded from the Tree of Life, the other from the tree of the knowledge of good and evil, and corresponded, as we have stated, to the right and left sides of the Sephirothic tree, and this is why it is said:

At the conclusion of these words we all crowded round the venerable stranger to embrace him, but he suddenly vanished out of sight and we saw him no more. Resuming his discourse Rabbi Simeon spoke and said: "There is yet another exposition of the words:

This Edenic River symbolized the Tree of Life in the spiritual world [of Atziluth]; that stands fair and beautiful amidst all that is pure and holy, as it is written:

For thou art not a God that hath pleasure in wickedness: neither shall evil dwell with thee. - Psalm 5: 4

'Went out of Eden,' denotes Enoch or Metatron the great angel of the Divine Presence [in Atziluth] and who came from the higher Eden of the Holy One (which is never infested with inferior orders of Hasnamussen or Maruts) to take charge of the lower or earthly Eden and protect it from the assaults and ingress of these demons. The upper Eden was the garden into which Ben Azar, Ben Zoma and Elisha, found an entrance.

Therefore Iod-Havah Elohim sent Adam forth from the [the upper] Garden of Eden, to till the ground [Yesod in Malkuth] from whence he was taken. So he drove out Adam; and he placed at the east of the Garden of Eden the Cherubim, and the flame of a sword which turned every way, to keep the way of the Tree of Life. – Genesis 3: 23, 24

Thus, from the tree of good and evil planted in the lower or [Malkuth] earthly Eden [Yesod] came forth the law inscribed on the two tablets of stone containing on one side positive precepts and on the other negative commandments, respecting what ought to be done and what left undone, what is pure and lawful and what is impure and unlawful."

You may say that when the Tree of Life departed from them the stones fell broke, and therefore they were separated from each other. Yet, “Whosoever speaks lies shall not be established before my eyes.” – Psalm 101: 7, because there is no separation between these marble stones above [in Binah]. For those who broke them were of those [in Yesod].

As Rabbi Simeon ceased speaking, there rose up in the midst of his audience an aged stranger grave and venerable in appearance and aspect and exclaimed: "Rabbi! Rabbi! What thou hast just spoken is true. The Tree of Good and Evil is not the Tree of Life, because the stones of the Tree of Knowledge [Daath] of Good and Evil are in a state of separation [in Yesod], while the pure marble stones [of the Tree of Life] are in a state of unity without any separation [in Binah]. The esoteric doctrine of the two Iods in the word וייצר veyitzer is this: They denote and symbolize two separate creations, one good, the other evil; one of life, the other of death; of things commanded and things forbidden, and are alluded to in the words:

And Iod-Havah Elohim formed Adam of the dust of the ground, and breathed into his nostrils [or soul ] the breath of life [from the upper Shechinah, which is called Eden and repentance]; and Adam became a living soul . – Genesis 2: 7

Thus, Adam is a threefold product of life (Nephesh), Spirit (Ruach), and soul (Neshamah), by the blending and union of which he became a living soul, a manifestation of the Divine."

Having uttered these words, the unknown stranger suddenly vanished out of sight, leaving the students lost in wonder and amazed. Then Rabbi Simeon spoke and said: "We have been honored with the presence in our midst of a great adept, and what he has spoken is in strict conformity with the words and teaching of scripture."

Come and see [יהי Yehi relates to Hallelujah]: הללויה Hallelujah. There is here a supreme praise to the Master of everything, whom no eye can behold or know, who is most hidden. Who is He? He is יה Jah, the highest name of all.

Therefore הללויה Hallelujah (meaning הללו 'Hallelu praise יה Jah ')" contains a praise and a name in one. Here it is undisclosed since he says הללויה Hallelujah, yet does not mentions the speaker, or to whom the word is addressed. As the name יה Jah is undisclosed, so is the praise, and I do not know who are those who address the praise. All should be thus covered in the supernal secret. After being concealed by the supernal secret, it is now revealed and said:

This is because the place is not as hidden as that supernal and most hidden of all [Kether], but is [Chokmah or] the place called name [יהוה], as it is written:

The first one, [יה Jah - Kether], is covered and undisclosed, while the second [יה Jah - Chokmah], is both undisclosed and disclosed [in Yesod]. And since it may be revealed, says that they praise the place [Yesod]. Who are those who praise? The servants [the righteous] of Iod-Havah, who are worthy of praising this place [sex].

Yehi be the name of Iod-Havah, from this time forth and for evermore! - Psalm 113:2

For יהי Yehi is not flowing water as is usually understood, but 'flowing light'; This is why it was likened to flowing water. And this light is never interrupted, nor is it cut off, nor separated. And because it flows from Kether, it is called 'infinite', for Kether is called [Eheieh – the becoming of] the Endless Light [Ain Soph Aur].