Said Rabbi Abba: "'Nephesh Chaiah' (living soul ) truly denote the souls (archetypes) of Israel. They (the archetypes) are the children (light images) of the Holy One (יהוה) and holy in his sight (Yehidah), but the (lustful) souls (psychological aggregates) of the multitudes and idolatrous (fornicator) people whence come they?"

Said Rabbi Eleazar: "They emanate from the left side of the Sephirothic tree of life, which is the side of (Lilith and Naamah) impurity, and therefore they defile all that come into contact with them. It is written:

Wherefore does the word למינה le-minah (according to sex) occur twice? It is to confirm what has just been stated, that the souls (archetypes) of Israel are chaste and holy, but (behemoth) the (bestial) souls of the unenlightened multitudes being unchaste and unholy are symbolized by the creeping thing (Hebrew רמש remes) and beast (Hebrew בהמה behemah) of the earth, and therefore, like the foreskin in circumcision, (Remes and Behemah) are cut off (from the living Elohim, El-Chai). It is written also:

Indicating that in Adam exist forces and powers coming in all directions from on high, which by 'Chokmah' (wisdom) will finally attain their culmination within him. The words 'Let us make Adam' include and contain the mystery of the male and female principles, of which every act and function is effected by supreme wisdom (Chokmah). 'In our image and after our likeness,' denote the dignity of Adam, as he alone amongst the animal creation is a complete unity in himself and is thus able to rule over all creatures below him.

"And Elohim saw everything that he had made and it was very good." - Genesis 1: 31

Here scripture supplies, what was not said of the second day, the term 'good' not being affirmed of it, because (of fornication) on (Yesod) the second day death was created. If it be asked, was it necessary that Elohim should see everything he made before pronouncing it to be good? The answer is that Elohim being omniscient knows all things and to him the past and the future are as the present; the past with its countless generations of men and the future enfolding everything that shall be in the course of ages to come, and this is the meaning involved in the above words, for everything created and made by Elohim cannot but be good. The scripture adds:

Why is it that the former paragraph (And Elohim saw...) is joined to this (and it was evening and it was morning the sixth) day and not to the others (days)? Because when the creation of the world was completed and finished, the union of male and female principles was established, through the letter ה Hei and therefore it is said, 'The heaven and the earth were finished' (Genesis 2: 1), having become harmonious to each other."

Said Rabbi Eleazar: "It is written:

"How great is thy (טוב tob) goodness (אשר asher) whom thou hast laid up for them that (ירא yare) fear Thee, which thou hast created for them that take refuge in thee, before the sons of Adam!" - Psalm 31: 19

Remark, that the Holy One (אשר asher) created and placed Adam in the world, so that by an upright (chaste) life and service he might attain to and enjoy the heavenly light (Yehidah) that has been laid up for righteous (chaste) souls , of which it is said from the beginning of the world:

"From the beginning of the world they have not heard, nor perceived with the ears: the eye hath not seen, Oh Elohim, besides thee, what things thou hast prepared for them that wait for thee." – Isaiah 64: 4

How can we attain unto this heavenly light (Yehidah) of the higher life (Chaiah)? Only by the study and the knowledge (Daath) of the secret doctrine, for only he who meditates therein, conforming and fashioning his life to its teachings, attains unto it (Chaiah and Yehidah) and becomes regarded as though he had created a world or a new life, as it was by the secret doctrine (of chastity that) creation originated and by it still subsists, as it is written:

"יהוה by wisdom (Chokmah) has founded the earth; and established the heavens by understanding (Binah)." - Proverb 3: 19

And further it is said:

"Then I was by his side, as a master workman: and I was his delight from day to day (in Genesis), playing before him at all times." – Proverbs 8: 30

These words signify that whosoever makes the study of the secret doctrine (of chastity) his delight contributes to the welfare and subsistence of the world, for the spirit by which the Holy One created and still sustains the universe is the same that operates in the hearts and minds of all true students of the higher (Chaiah) life (better said: students of a higher-sexuality), as also of young (chaste) learners. 'How great is Thy goodness' refers to (Chesed) the special good or blessing the Holy One has reserved for them whom (אשר asher Whom) fear Him, and scripture adds, 'Which thou hast created for them that take refuge in thee, before the sons of Adam! What is the meaning of the words 'Which Thou hast created?' They refer to the work of creation."

Said Rabbi Abba: "They refer also to the Garden of Eden, the Holy One planted on (Yesod, the fourth-dimensional) earth after the pattern of the celestial paradise, for the chaste to dwell therein, and therefore it is written, 'Which Thou hast created for them.' There are, therefore, two paradises, one heavenly (the higher life in Daath), the other earthly (for the children of Adam in Yesod)."

Said Rabbi Simeon: "The scripture certainly speaks of a celestial paradise, and with reference to the words 'before the children or sons of Adam,' they mean that those (chaste ones) who delighted in the worship and service of their Lord will dwell therein. 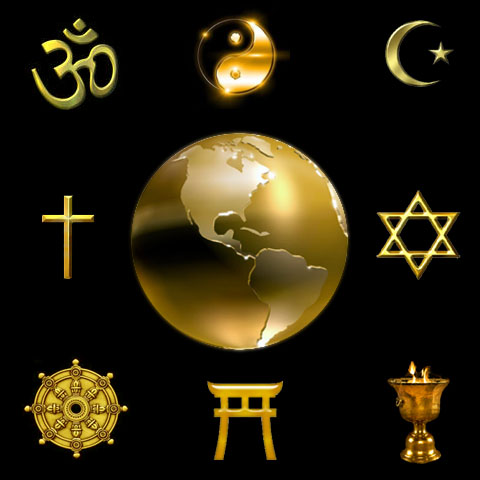 All religions are precious pearls linked on the golden thread of Divinity. - Samael Aun Weor

The words, 'The heavens and the earth' denote the written and unwritten or traditional Torah, Dharma or Law. 'And all their host' refer to the expositions and commentaries on them (heavens and earth), amounting in number to seventy. The words, 'were finished' designate the union of these (heavens and earth), the one being complementary to the other. Whilst, 'with all their hosts or constellations' refer to the divers interpretations of these laws (or archetypes in all religions), as also to things lawful and non-permissible.