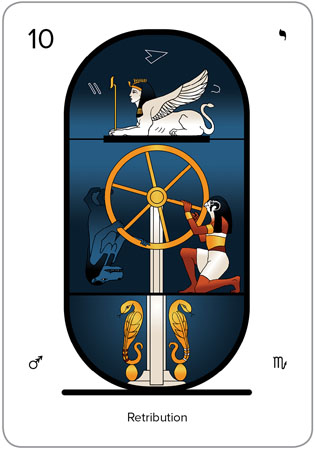 In the waters of life, we find two serpents: the positive solar serpent that healed the Israelites in the wilderness, and the negative serpent, the tempting serpent of Eden which is related to the lunar bodies, the bodies of sin.

In the middle of the plate is the Wheel of Fortune, the Wheel of Samsara, or the wheel of death and birth. The evolving Hermanubis ascends on the right side, and on the left side, the devolving Typhon Baphomet descends. After 108 lives, the wheel makes one complete turn. As it rises, we pass through the process of evolution in the mineral, vegetable, animal, and human kingdoms. On descending, we fall through the same path. The Wheel of Samsara makes 3,000 turns, after which the Essence, after so many purifications and sufferings, returns to the Absolute. However, it returns without realization of the Self.

In the superior part of the plate is the sphinx, which represents Mother Nature, balancing itself over the wheel. The sphinx is the Elemental Intercessor of the blessed Mother Goddess of the world. We find the five elements represented in the sphinx:

Water: the face of a man

Air: the wings of an eagle

Earth: the hoofs of an ox

Fire: the paws of a lion

In the Tenth Arcanum we find the wheel of destiny, the cosmogenic wheel of Ezekiel. On this wheel we find the struggle of the antithesis, Hermanubis at the right, Typhon at the left. This is the wheel of the centuries. It is the Wheel of Fortune, the wheel of reincarnation and karma, the terrible wheel of retribution. The mystery of the Sphinx is upon the wheel.

In the wheel of the antitheses, two serpents are fighting each other.

In this wheel, the whole secret of the Tree of Knowledge is enclosed. The four rivers of Paradise emerge from this unique stream. One of the rivers runs through the dense, sunny jungle, watering the philosophical earth that is from the gold of light, and the other, tenebrous and disturbed, circulates within the kingdom of the abyss. Light and darkness, white magic and black magic, are mutually struggling. Eros and Anteros, Cain and Abel, live within ourselves in an intense struggle until the moment we discover the mystery of the Sphinx. Then we grasp the flaming sword, liberating ourselves from the wheel of the centuries.

The Tenth Arcanum is Kabbalistically called the kingdom or vital center. It is called the formed root of all of the laws of Nature and of the cosmos.

To form signifies to initially intellectually conceive, and then after, to build or draw. That is why the number ten is the formed principle of all things.

By taking the line out of the circle, we have the number ten, and the mantra of the Divine Mother. The entire universe is a product of the sexual energy. Without the power of the creative energy, the universe could not be formed. Without the sexual creative energy there is no universe. That is why the number ten is the formed principle of all of nature.

The circle with a point in the center can also be drawn as:

The number ten teaches many things. Let us remember the circle which is a symbol of the Divine Mother. We can say that the following symbols are essentially the same in their depth.

In this number 10 are the following principles:

Behold, here is the verb in its triple aspect.

The point within the circle that in movement makes itself into a line can be found in the following ways.

We have seen that the number ten comes from that symbol, as well as the IO, which is the mantra of the Divine Mother, that also gives place to the ten emanations of Prakriti, meaning the ten Sephiroth of the Kabbalah.

The ten Sephiroth are:

One, two, and three are the three Logoi, the three-unity Sephirothic Crown. This is the first triangle.

After this Sephirothic Crown we find:

4. Chesed: Atman, the Innermost, our Divine Being

5. Geburah: The feminine Spiritual Soul, Buddhi. It is the superlative consciousness of the Being. It is the principle of justice, the law. Whenever consciousness is spoken of, it is referring to Buddhi, the Elohim who say, “Do battle for me in the name of Tetragrammaton.”

In the third triangle, we find seven, eight, and nine:

The ten Sephiroth are within each one of us. They subexist in all organic and inorganic matter. Every human being has them, but needs to incarnate them. When they are already Self-realized, the Sephiroth sparkle like precious gems within Atman.

The Sephiroth form regions where the Archangels, Angels, Cherubim, Potencies, etc., live. The Sephiroth have their points of relation with the physical body.

Location of the Sephiroth within the physical body:

1. Kether: the crown, in the superior part of the head

2. Chokmah: right side of the brain

3. Binah: left side of the brain

4. Chesed: in the right arm

5. Geburah: in the left arm

6. Tiphereth: in the heart

7. Netzach: in the right leg

9. Yesod: in the sexual organs

These are the points of contact of the Sephiroth with the human body.

The Sephiroth are atomic. They are not atoms of carbon, oxygen, and nitrogen. They are atoms of a spiritual nature that belong to occult, esoteric, and spiritual chemistry.

The Sephiroth are masculine; however, there also exist feminine Sephiroth. Profound space constitutes the neutral zone, the magnetic field, etc. This is not found in books. One has to discover this for oneself. I have spoken to you from a direct, mystical point of view.