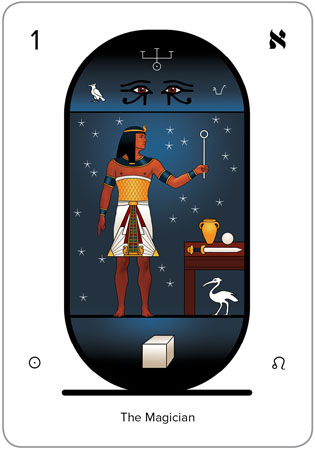 The eyes in the superior part of the card represent the eyes of the Father. Internally, they represent the infinite, the Holy Eight, the Caduceus of Mercury, the eight Kabirs that direct the planet. The Magician is in profile, showing his right side, meaning that the entire right side represents the Manifested One. The serpent is situated upon his forehead, indicating that he has risen and that he is a Self-realized Master. The left hand of the Magician holds the staff of power. This symbolizes the spinal medulla that points toward the infinite. His right hand points toward the earth, indicating that he dominates it with science and that one has to rise up from below. It is not possible to ascend without previously descending. One needs to descend to the Ninth Sphere, which has two representations. The first is sex, the Cubic Stone of Yesod. The second is the nine circles, the atomic Infernos where the initiate must descend. The right hand symbolizes the descent in order to ascend.

There is a triangle on his dress with a vortex pointing upwards, representing the three primary forces reunited in Kether, the One. By his side there stands a table which represents the four elements (earth, water, fire, and air), the physical plane.

Upon the table various objects rest in disorder: the sword of power, the lingam (sexual masculine organ); a chalice representing the physical brain, and also the yoni (feminine sexual organ); and a moon that must be converted into a sun. Beneath the table is the immortal Ibis, the Phoenix bird, the Kala Hamsa swan, the Holy Spirit that symbolizes love. It is beneath the table to indicate that one has to organize the disordered objects upon the table by means of the sacred fire of the Third Logos.

In the inferior part of the plate we find the Cubic Stone, the chiseled Philosophical Stone within the waters of life, indicating the work that we must perform. It is the Cubic Stone of Yesod, sex, the stumbling stone, the rock of scandal.

The esoteric study of the Tarot is divided into two parts: the esoteric and the mathematic. The first has twenty-two arcana and is followed by the advancement of the second part through mathematics.

With the First Arcanum we enter into the Sanctum Regnum of magic. The Holy Eight upon the head (illustrated by the two eyes) is the symbol of the infinite. It represents the eight Kabirs and is the symbol of life and death.

This sacred symbol of the infinite is found in the center of the earth, in the Ninth Sphere. All of the organisms rotate upon this symbol and also within the human body of anyone who wishes to Self-realize. There is always an internal struggle between the brain against sex, sex against the brain, and heart against heart. If sex commands the brain, the result is the fall, and the Pentagram (representing the Master) remains with the inferior points aiming upward and the superior point aiming downwards.

The Holy Eight is a very important and interesting symbol. It encloses, defines, and joins the magnetic currents that are established between the terrestrial and the spiritual man. This sign joins or separates all of the elements which are controlled by the atomic energy if it is traced with the middle finger, index finger and the thumb over the surface of the cardiac plexus.

Place the mind in quietude and silence and go to sleep imagining the figure of the Holy Eight (the infinite) and tracing the sign over the heart as previously mentioned. Let this figure submerge into your consciousness; clear your mind of all thoughts. After a certain time, you will awaken consciousness in the region known as the Astral World.

If we observe the spinal column we will see the Holy Eight, the Caduceus of Mercury, or Hermes. This represents the two ganglionic cords that entwine along the spinal medulla and that are known as Ida and Pingala, the Two Witnesses, the two olive branches, or, the two candlesticks which are before the throne of the God of the earth. They ascend towards the brain to the pineal gland, then ascend to the pituitary gland in the midbrow, and finally reach the heart through a fine thread called the Amrita-Nadi.

The Holy Eight is, has been, and will always be the key of everything. A Magician cannot exist without the Holy Eight.

If we consider the tracing of this symbol, we see that it encloses a double circuit where the two forces cross. One closes and the other opens. This is the key to open all of the doors. It opens our interior temple. It is the sign that opens the Book of the Seven Seals. It is used for everything in the Sacred Order of Tibet, an Order that we have the honor of representing here in Mexico. It is the most powerful Order of all the Oriental traditions. This Order is formed by 201 members. The major rank is formed by seventy-two Brahmans. The great Regent of this order is the great Guruji Bhagavan Aklaiva. This Sacred Order of Tibet is the genuine owner of the real treasury of Aryavarta. This treasury is the Arcanum A.Z.F.

Concentrate on the Sacred Order of Tibet and the Holy Eight. Moments before lying down, call upon the Master Bhagavan Aklaiva. With continued practice, he will help you to depart in your Astral Body. A given night, you will be called to assist the Tibetan Lodge and you will be submitted to seven ordeals in the Temple of the Himalayas. When you are called, the Masters pull your Astral Body from your feet so that you can present yourself standing.

We must be courageous because we will be submitted to many difficult ordeals. We will be decapitated and our heart will be pierced with a sword. One must be courageous. The one who has aspiration and consistency will succeed. This Sacred Order of Tibet is very strict. The true rulers of humanity are found there.

The fire of Phlegethon and the water of Acheron cross in the Ninth Sphere, sex, and form the sign of the infinite. It is necessary to work with water and fire, which is the origin of beasts, Human Beings and the Gods. One who wishes to ascend must have previously descended. This is the ultimate ordeal of which almost everyone fails. It is tremendous.

Everything in life has a price. Nothing is given as a gift. Life is the cost of the realization of the Self. One must be courageous in order to be admitted into the Sacred Order of Tibet. Our organism is constituted just as the earth is constituted. We must work and descend into our own Infernal Worlds.

It is necessary to work with the sexual energy, which is the Cubic Stone of Yesod. 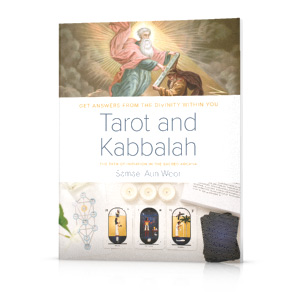