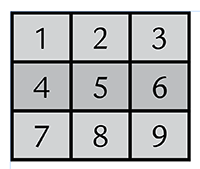 This board or plate is very important in order to deeply comprehend the esoteric mysteries. It is a quadrilateral which is divided into nine numbers. There is a vertical and horizontal triple division. The principles of arithmetic and geometry are expressed here.

It is necessary to comprehend that this plate is related with the three principles previously mentioned: architecture, geometry, and mathematics. One has to relate with numbers, because the Kabbalah is based upon them.

The square divided into nine parts represents a triple extension, the triplicity of the ternary, or the Ninth Sphere. A lot has been explained about the Ninth Sphere, but it can be demonstrated mathematically. Everything related with the Ninth Sphere or the realization of the Self of the human being can be proven with numbers or esoteric mathematics, which come from remote epochs.

One is the Monad, the unity, הוהי Iod-Heve or Jehovah, the Father who is in secret. It is the divine triad that is not incarnated within a master who has not killed the ego. He is Osiris, the same God, the Word. He has his expression in the “4,” because the four is the chariot, the Merkabah of Kabbalah, which is formed with the four bodies:

This is the chariot of the centuries, which assumes the figure of the heavenly human. The Monad expresses himself through the chariot. The Monad travels in it.

The four also represents the four points of the cross, in which are enclosed the mysteries of lingam-yoni. In the crossing of lingam-yoni is found the clue with which the realization of the Self can be achieved. The Monad is self-realized by means of the cross. Without the four there is no realization of the Self, otherwise the law of the ternaries that belongs to esoteric mathematics would be violated.

The mysteries of sex are contained within the four.

The self-realization of the Monad is verified in the septenary, the authentic human. The septenary is complete when the seven principles are obtained: the seven christified bodies with the seven developed chakras and the arisen seven Serpents of Fire.

The two is Heve [הוה], the Divine Mother. It is the unfolded Father. Then, she is Brahma, because she is the feminine aspect of the Father.

The authentic Jehovah is our Father and our Divine Mother who are in secret.

The cruel Jehovah of the Jews is an anthropomorphization of the true Jehovah, which is within each one of us. Heve, the Divine Mother, expresses herself through intelligence, which is the number five. It is by means of her that the elimination of the ego is achieved, because true intelligence is within her. If the dissolution of the ego is requested, we have to appeal to the Divine Mother, by deeply comprehending our own errors and asking unto her for their elimination.

The Divine Mother manifests herself through the Holy Eight, or Caduceus of Mercury, which represents the dorsal spine, the ascending energy of Kundalini along the Shushumna canal.

The Holy Eight has its root in sex. The Holy Eight is the sign of the infinite. The relation of the numbers 2, 5 and 8 is extraordinary. The Caduceus of Mercury is found in the Ninth Sphere.

All of this wisdom was known among the Pythagorean mysteries. It is known within Masonry; however, they are no longer being profound in these studies.

The number three corresponds to the Third Logos, the Holy Spirit. The Third Logos is in himself the creative sexual force which expresses itself in the entire universe.

The three triads or horizontal lines represent the three worlds.

In this plate, the principles for the realization of the Self of the human being are contained.