The ten Sephiroth of universal vibration emerge from the Ain Soph, which is the microcosmic star that guides our interior. This star is the real Being of our Being.

Ten Sephiroth are spoken of, but in reality there are twelve; the Ain Soph is the eleventh, and its tenebrous antithesis is in the abyss, which is the twelfth Sephirah.

The Sephiroth are atomic. The ten Sephiroth can be reduced into three tables:

1. A quantum table of the radiant energy that comes from the sun

2. An atomic weight table of the elements of nature

3. A molecular weight table of compounds

This is Jacob’s ladder, which goes from Earth to heaven. All of the worlds of cosmic consciousness are reduced to the three tables.

A Sephirah cannot be understood only in one plane, because it is of a quadruple nature. Therefore, the Kabbalists clearly express the fact that there are Four Worlds. 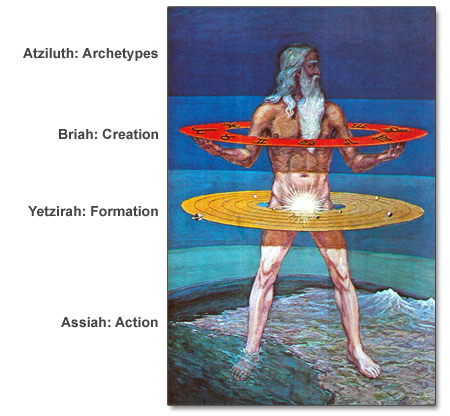 Three Sephiroth of form are found in the Pillar of Severity (Binah, Geburah, and Hod).

Three Sephiroth of energy are found in the Pillar of Mercy (Chokmah, Chesed, and Netzach).

The Pillar of Equilibrium is between these two pillars, where all of the distinct levels of consciousness are found (Kether, Tiphereth, Yesod, and Malkuth).

The ten known Sephiroth come from Sephirah, the Divine Mother, who resides in the heart temple. The mantra of the Divine Mother is IO which is the 10 emanations of Prakriti, in other words, the 10 (ten) Sephiroth.

Chokmah is the Son, the atomic Christ in us.

Binah is the Mother in us, the Holy Spirit in us.

Kether, Chokmah, and Binah are our Sephirothic Crown.

The very beloved Father, the very adored Son, and the very wise Holy Spirit live within the profundities of our superlative consciousness, waiting for the supreme instant of our realization.

The Holy Spirit is our Divine Mother that dresses with a blue mantle and a white tunic of exquisite splendors.

The Mother holds in her hand a precious lamp. This lamp is the Innermost who burns within the depth of our hearts. The Innermost is contained within a fine and transparent glass of alabaster. This glass is our own superlative consciousness; it is our Buddhi.

The Innermost and Buddhi express themselves through the Human Soul.

Therefore, the Innermost, with his two Souls, the Divine and Human, officiates on his throne, which is the cerebrospinal nervous system.

This Cubic Stone is the ethereal body. Malkuth is the physical body.

Therefore, the human being is a complete decade. We have ten fingers on our hands, ten Sephiroth, and Ten Commandments.

When the Elder of Days has Self-realized the ten Sephiroth, he transforms himself into Adam-Kadmon, the Heavenly Man.

Whosoever Self-realizes the ten Sephiroth will shine in the world of the Light with ineffable Christic splendors.

He that hath an ear, let him hear what the Spirit saith unto the churches; To him that overcometh will I give to eat of the tree of life, which is in the midst of the paradise of God. - Revelation 2:7

The ten Sephiroth shine as precious stones in the body of the Ancient of Days. This is how we convert ourselves into the Heavenly Jerusalem.

And the foundations of the wall of the city were garnished with all manner of precious stones. The first foundation was jasper; the second, sapphire; the third, a chalcedony; and the fourth, emerald;

The fifth, sardonynx; the sixth, sardius; the seventh, chrysolite; the eighth, beryl; the ninth, a topaz; the tenth, a chrysoprasus; the eleventh, a jacinth; the twelfth, an amethyst. - Revelation 21:19-20

In the midst of the street of it, and on either side of the river, was there the tree of life, which bare twelve manner of fruits, and yielded her fruit every month and the leaves of the tree were for the healing of the nations. And there shall be no more curse but the throne of God and of the Lamb shall be in it; and his servants shall serve him And they shall see his face; and his name shall be in their foreheads. And there shall be no night there; and they need no candle, neither light of the sun; for the Lord God giveth them light and they shall reign for ever and ever. - Revelation 22:2-5

When a human being incarnates the Sephirothic Crown, then the Elder of Days will shine upon him and he shall reign forever and ever.

Nonetheless, brothers and sisters of my Soul, truly I tell you that no one reaches the Father except through the Son. The Son is the atomic Christ in us; he is Chokmah, the divine Christic wisdom, the Gnosis which shines in the depth of our heart.

We have to inundate all of our vehicles with atoms of a Christic nature. We have to form Christ within ourselves in order to rise towards the Father, for one reaches the Father only through the Son.

It would be worthless for the Christ to be born one thousand times in Bethlehem if he is not born in our hearts as well. We have to form Christ within ourselves in order to enter through the doors into the triumphant and victorious city on Palm Sunday.

Christmas is a cosmic event that must be performed in each one of us. The Nativity (Christmas) is absolutely individual.

It is necessary for the Christ to be born in each one of us. The Nativity of the heart is urgent.

We need to transform the Tree of the Science of Good and Evil into the Immolated Lamb of the Holy City.

Him that overcometh will I make a pillar in the temple of my God, and he shall go no more out. - Revelation 3:12

Be thou faithful unto death, and I will give thee a crown of life. - Revelation 2:10

Indeed, Christ is a Sephirothic Crown (Kether, Chokmah, and Binah) of incommensurable wisdom, whose purest atoms shine within Chokmah, the world of the Ophanim.

This Sephirothic Crown (incommensurable) sent his Buddha, Jesus of Nazareth, who through innumerable reincarnations prepared himself in our terrestrial evolution.

It was in the river Jordan where the Christic crown, the Solar Logos, shone and penetrated within his Buddha, Jesus of Nazareth.

Behold here the mystery of the double human personality, which is one of the greatest mysteries of occultism.

When the human being receives the Sephirothic Crown, then the Ancient of Days illuminates him and guides him towards the waters of pure life.

Nonetheless, brothers and sisters of mine, no one reaches the Father except through the Son, and the Son is in the depth of the Ark of the Alliance waiting for the instant of realization.

The Ark of the Alliance is our sexual organs. Only through perfect chastity can we form the Christ within ourselves and rise towards the Father.

Brothers and sisters of mine, I already gave you, I already granted unto you, the Ark of the New Testament. I already taught you the path of Sexual Magic.

And the temple of God was opened in heaven, and there was seen in his temple the ark of his testament and there were lightnings, and voices, and thunderings, and an earthquake, and great hail. - Revelation 11:19