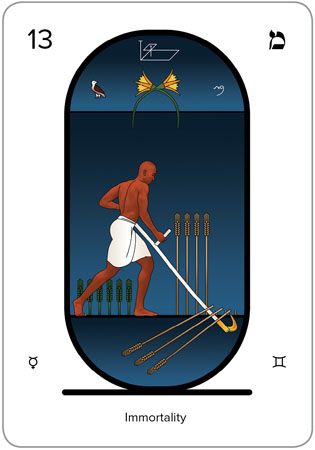 In this arcanum, the sheaves of wheat and the flowers represent rebirth. The flowers symbolize the beginning of life; the wheat symbolizes the end.

A hierarch of the law cuts some stalks of wheat that have large and small grains, which are called Bobbin-Kandelnosts. They represent the values, the capital, that each human being carries in the three brains (intellectual, motor, emotional).

This arcanum has a physical and internal representation. It is the arcanum of Judas Iscariot, which represents the death of the ego.

The scythe is the funeral symbol of the angels of death.

Indeed, death is the return to the womb. Life and death are two phenomena from the same source.

In actuality, the soul does not return because the individual has not incarnated their soul yet. Only the values return. The returning values of the consciousness belong to the mechanics of nature.

The angel of death who is in charge of cutting the thread of existence approaches the bed of the one who is in agony when the hour of death arrives. The angel of death takes the individual out of the physical body and with the scythe cuts the silver cord (a certain mysterious silver thread that connects the internal bodies with the physical body.) This is done in the precise instant when the last breath is exhaled.

That magnetic cord can contract or extend itself to the infinite. In the moment of awakening from the world of dreams, we can return again to the physical body thanks to that thread.

Those that are in agony see the angel of death. When the angels of death are at work, they dress themselves with funeral robes and assume a skeletal, spectral appearance as they grasp the scythe with which they cut the silver cord. This gloomy appearance is assumed only when they work. When they are not on duty, they adopt very beautiful features, such as children, women, or as venerable elders.

The angels of death are never evil or perverse. They always work in accordance with the Great Law. Everyone is born in their hour and dies exactly at their time.

Proserpine, the queen of hell, is also Hecate, the blessed goddess Mother Death, under whose direction the angels of death work. The Mother Space converted into the Mother Death loves her sons and daughters in a very odd way, for she takes them away.

The blessed goddess Mother Death has the power to punish us when we violate the law, and she has the power to cut our life. It is indubitable that she is a magnificent aspect of our mystical duad, a splendid form of our own Being. The angel of death would not dare to cut the thread of life, the silver cord, the Antakarana, without her consent.

2. The vital body or lingam-sarira

The physical body disintegrates within the sepulchral grave in a gradual process.

The vital body floats before the sepulcher like a fluorescent phantom which is sometimes visible to very psychic people. This vital body slowly disintegrates together with the physical body.

That which continues, that which is not going to the sepulcher, is the ego, the “itself,” the “myself,” the “I,” a certain collection of devil “I’s” that personify our psychological defects.

Therefore, that which continues after death is not something beautiful. That which is not destroyed with the physical body is nothing but a bunch of devils, psychological aggregates, a bunch of defects. The Essence, the psyche, the Buddhata, is the only decent thing that exists in the depth of all of those hellish entities that constitute the ego.

Normally such psychological aggregates are processed in the astral or mental worlds. Rare are the Essences that achieve the emancipation from within such subjective elements in order to enjoy a vacation in the causal world before returning to this valley of tears. This is only possible with the dissolution of the ego.

Normally, the egos submerge themselves within the mineral kingdom in the infernal worlds, or they return, either in an immediate or gradual way, into a new organism.

The ego continues in the seed of our descendants. We incessantly return in order to continuously repeat the same dramas, the same tragedies. We have to emphasize the following statement that not all of the psychic aggregates achieve human return. In reality, many devil “I’s” are lost due to the fact that some either submerge themselves into the mineral kingdom, continue reincorporating themselves into animal organisms, or obstinately fasten themselves, adhering to certain places.