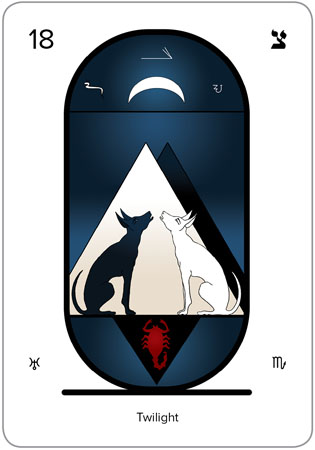 A scorpion within an inverted triangle is in the waters of life. It signifies that we kill the Divine Mother like a scorpion when we spill the glass of Hermes.

In the middle of the plate are two pyramids, one white and the other black, symbolizing the positive and the negative forces. Two dogs, or wolves, one white and the other black, bark at the moon. The white is positive and symbolizes friendship, the black is negative and symbolizes the psychological “I.” They represent the terrible struggle that occurs between the tenebrous forces. The moon by itself represents sex. We should work with the moon to convert it into a sun. The dog also represents the sexual instinct. That is why it is the dog that takes us through the very doors of the Absolute.

It is necessary to study, to analyze, and to reflect profoundly on the esoteric content of this arcanum.

The Eighteenth Arcanum is light and darkness, white magic and black magic. This is found represented in the white dog and the black dog, the white pyramid and the black pyramid.

By Kabbalistically adding the Eighteenth Arcanum, we find 1 + 8 = 9, the Ninth Sphere, sex. We have already stated that within our planetary organism there are nine interior layers. These are the nine cellars of occult Masonry.

The ninth cellar corresponds to the nucleus of the planetary organism. There, we find the sepulcher of Hiram Abiff or Chiram Osiris, who is the Intimate Christ of each one of us, of every person that comes to this world. It is an error to believe, or to suppose, that the Christ is only Jeshua ben Pandira, which is the name of Jesus the Christ. We do not deny that he is the living incarnation of the Verb, the Logos.

All of us need to resurrect this intimate Christ, and in order to achieve this, it is obvious that we have to descend to the Ninth Sphere, sex. That is why Hiram Abiff is in the ninth circle in the ninth cellar.

All of us are children of sex. That is why in The Divine Comedy the condemned ones are seen in the ninth circle with the water reaching their creative organs. They cry and their tears freeze in their eyes because it is a valley of tears and afflictions. The fact that the waters reach up to the creative organs is due to the fact that these are the spermatic waters. We are born crying and we die crying.

If we add 9 + 9 = 18, we then find that in the Eighteenth Arcanum the number nine is found twice. Within these two nines there is a balance. One nine is the positive aspect and the other is the negative aspect. But the number eighteen results negatively and fatally within itself, representing the secret enemies that are in the Arcanum of Twilight. This is because in the work of the Ninth Sphere, one has to fight immensely, because one has to learn how to sublimate the sexual energy. The clue or key to all of the empires is here.

Now we are going to study the symbolism of the dog. The dog participates in magic. It is a generous animal that in the ancient times was always consecrated to the God Mercury. The dog of Mercury is strictly symbolic because it clearly allegorizes the sexual power. Therefore, the high honor that the Hierophants of ancient Egypt granted to the dog is obvious.

The dog Cerberus is in the infernal worlds, and we must take him out from there. We have to steal him from the infernos. This signifies the liberation of the sexual force.

To take Cerberus from the abode of Pluto is urgent. Cerberus, the wondrous terror, with his bark and with his three enormous flat-muzzled heads (which have necks surrounded by serpents), happily lives there. He barks at all of the dead and fills them with fear.

The dog and the swan that fly upon the waters of life are the same as the dog and the Egyptian ibis, the force of the Holy Spirit, the sexual force. All of this is the glass of Hermes that must be elevated very high.

In the archaic doctrine, in occult wisdom, the guide dog is spoken of. It is a dog that conduces the initiates to the sanctum regnum.

There are occasions when the initiates forget their dog and believe that without it they can continue on the path, but this is not so. Sooner or later, when they feel themselves stagnant, they have nothing more to do but to grasp onto the dog. When we are stagnant, the dog is the one that teaches us the path. One has to take it out from the abyss. We must not forget that the Cerberus-Tricipite pulls the cart of its owner, taking the owner along on the craggy path that leads to the Final Liberation.

Heracles took the dog out of the abyss in order for it to serve him as a guide. We have to do the same thing when we achieve chastity. Then, by working in the forge of the Cyclops by practising Sexual Magic, by transmuting our creative energies, we advance on the path of the razor’s edge until we reach liberation.

Woe to the initiates that abandon their dog. They will go astray from the path and will fall into the abyss of perdition. Unfortunately, the intellectual animal that is incorrectly called a human being, has not achieved chastity, meaning Cerberus has not been taken out of the infernal dominions.

Now you will understand for yourselves why the dead suffer in the Plutonian abysses when they listen to the bark of Cerberus, the dog of the three hungry jaws.

Let us never forget that Cerberus, the guardian dog of the infernos, caressed those that entered, and without pity, devoured those that tried to leave.

It is obvious that the lost ones suffer with the insatiable thirst of lust in the frightful Tartarus.

This path is full of dangers from within and from without. Many are those who begin, few are those who arrive at the end. The majority shift direction towards the black path. In the Eighteenth Arcanum, there exist very subtle dangers that the student ignores.

The number nine is simultaneously positive and negative. This is the mystery of the Eighteenth Arcanum. In this disturbing arcanum we find all of the potions and witchcraft of Thessalia. The books of the grimoires are full of tenebrous recipes which are very proper to the Eighteenth Arcanum, such as erotic magical ceremonies, rites in order to be loved, dangerous potions, etc... All of this is the Eighteenth Arcanum. We must warn the Gnostic students that the most dangerous potion that the tenebrous ones use in order to take the student out of the path of the razor’s edge is the intellect. They use it in order to invite us to ejaculate the seminal liquid, or in order to shift the direction of our path by showing us other schools, theories, sex, etc., etc...

We have to remember that mislead men worshipped the great Beast saying, "Who is like unto the Beast? Who is able to make war with him?" - Revelation 13:4

Here is wisdom. Let him that hath understanding count the numbers of the Beast for it is the number of a man; and his number is six hundred and three score and six. - Revelation 13:18

Almost all of the “human” population of this valley of tears have the mark of the Beast already on their foreheads and on their hands. All of these Souls are lost. Since 1950, they have been entering into the abyss. The human population has totally failed.

The gods judged the Great Harlot whose number is 666. The sentence of the gods was: