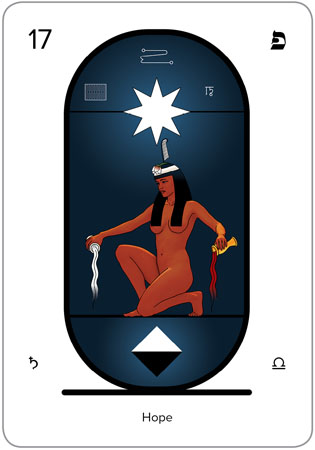 In the waters of life are two triangles, the positive and the negative.

In the middle of the plate is a woman sprinkling the earth with two elixirs (masculine and feminine). On her head is the lotus flower, indicating her developed chakras.

The hieroglyph of the Seventeenth Arcanum is a radiant star and eternal youth. In this arcanum, a naked woman appears who sprinkles over the earth the sap of universal life, a sap which comes from the two glasses, a glass of gold and the other of silver.

If we carefully study the esoteric content of this arcanum, we discover perfect Alchemy. We need to work with the gold and with the silver, with the sun and with the moon, in order to incarnate the star of eight points, the star of dawn.

Really, the star of eight points is Venus. One who reaches the Venustic Initiation has the joy of incarnating the Dragon of Wisdom (the internal Christ).

One has to work with the fire and the water in order to receive the Venustic Initiation. The star crucified on the cross is the Christ of the Abraxas, the Son of Man, the incarnated Verb.

Christ is the star of dawn. Christ enters into the Soul when one receives the Venustic Initiation.

When we decapitate and dissolve the “I,” the “myself,” then we receive the Venustic Initiation. One who receives it incarnates the star.

Everyone that wants to incarnate the Star has to work with the sap of life contained in the two sacred glasses that the naked woman in the Seventeenth Arcanum has within her hands.

The star that guides us internally is the Father Star. What is important for us is to incarnate that Father Star. Behold here the mystery of the Seventeenth Arcanum. The sap contained in the glasses of gold and silver, when combined and transmuted wisely, permit us to reach the incarnation of the star. The crucified star on the cross is the Christ.