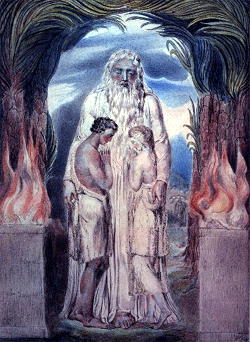 When human beings exited Eden, their consciousness was submerged into certain atomic strata or luciferian regions. Then the human soul sank into its own atomic infernos and lost its powers. This is how the soul exited Eden, how the Edenic being died, and the luciferian being was born. This is why the Lord Jehovah said,

Of every tree of the garden thou mayest freely eat: But of the tree of the knowledge of good and evil, thou shalt not eat of it: for in the day that thou eatest thereof thou shalt surely die. - Genesis 2:16, 17

Within the gigantic patios of the temples of ancient Lemuria, men and women united sexually in order to create; at that time the sexual act was guided by the Elohim. Man and woman (sexually united) knew how to withdraw before the orgasm in order to avoid the seminal ejaculation.

At that time, the Elohim were utilizing one spermatozoon and one feminine gamete in order to create, since only one spermatozoon and one feminine gamete are needed in order to create. A spermatozoon is so infinitesimal, so microscopic, that it can easily escape from the sexual male glands without the necessity of spilling the semen. This is how the Edenic being sexually reproduces. This is how the children of Immaculate Conception are born. This is what Immaculate Conception means.

Lucifer tempted the human being and the human being fell into temptation. Lucifer as a black magician wears a bloody colored tunic and covers his head with a red cap like the Bons and the Drukpas from oriental Tibet. The lustful forces of the Luciferians awoke animal passion within human beings; then men and women started to ejaculate their semen. This is the cause for which the Lemurian tribes were expelled from the temples.

Then, in those times of yore, the Kundalini , that was victoriously lifted up in the medullar canal, descended to the coccygeal bone and there it lingered, enclosed within the chakra Muladhara. The lamp of the temple was snuffed out and the human being sank himself into profound darkness.

Thus, this is how the Edenic being died and the Luciferian being was born. Then, when the human being ate from the forbidden fruit, the Lord Jehovah said,

However, Lucifer gave us independence. The forbidden fruit made us cognizant of the science of good and evil. This science is very profound. There is good in the evil and there is evil in the good. There is something evil within everything good; there is something good within everything evil. Crime is also hidden within the incense of prayer; crime is also hidden within the perfume of litany.

There exists much virtue in the evil ones, likewise there is much evil in the virtuous ones. Whosoever knows the good from the evil and the evil from the good receives the terrible sword of Cosmic Justice.

Angels know the science of good and evil. Angels are perfect humans. Angels also exited Eden and returned into Eden; this is why they are Angels. As we presently are, the Angels also were formerly.

Jehovah, the governor of Eden, said,

Of every tree of the garden thou mayest freely eat: But of the tree of the knowledge of good and evil, thou shalt not eat of it: for in the day that thou eatest thereof thou shalt surely die. - Genesis 2:16, 17

Yet, Lucifer said unto the woman,

Ye shall not surely die: For God doth know that in the day ye eat thereof, then your eyes shall be opened, and ye shall be as Gods, knowing good and evil. - Genesis 3:4, 5

Thus, this is why when the human being ate from the forbidden fruit the Lord Jehovah said,

The human being sank into the atomic infernos of nature when he exited Eden. If it was not for Christ, it would be impossible for us to leave the abyss. Fortunately, a Savior was sent to us; that Savior is Christ.

We must now incarnate Christ within our selves in order to return to the Father. No one comes to the Father, but through the Son.

Only in the redeemer’s blood can our robes be washed and made white, to dress us, so that we can enter into Eden, exactly through the same door from which we exited. The supreme obedience of Christ opposed the supreme disobedience of Adam.

Jehovah gave us his commandments. Lucifer gave us individual self-independence and Christ redeems us from sin. This is how the Gods are lifted up from the mud of the earth.