The Baptism of Jesus

Albeit the Buddha Jesus was full of majesty, nonetheless he needed only one thing: his coronation. Consequently, Jesus went towards Jordan where John had his haven. Since John is a great master of the White Lodge, John officiated in his temple located at Jordan. At the door of the temple, John wrote an inscription that stated, “Profane dances are forbidden.” John was a white bearded, venerable elder of medium stature. When officiating inside the temple, he dressed in his royal priestly robe; however, outside the temple, he dressed modestly, enveloping his body with camel’s hair. Thus, this venerable elder was full of majesty. His half-naked body full of strong muscles and his wide forehead reflected the majesty of his resplendent Being, thus everyone respected him.

As it is written in the books of destiny, John had to live until the arrival of the Messiah. John had to be the great initiator of the Buddha Jesus.

When Jesus entered the temple, John was dressed in his priestly garments, thus he commanded Jesus to remove his vestures. Jesus undressed and only his sexual organs remained covered with a white cloth. Thereafter, Jesus came out of the vestibule and entered the sanctuary. There John anointed the Lord with pure oil and poured water over his head. It was in those moments when three stars resplendently shone within the internal heaven of the Spirit, and through the third star, red as living fire, from that heaven of the Spirit, descended (Chokmah) the Spirit of wisdom. Yes, this was the supreme moment in which the Spirit of wisdom entered in Jesus through his pineal gland.

Apocalypse (Revelation 2:10) states, “Be thou faithful unto death, and I will give thee a crown of life.” Jesus was faithful and therefore he received the Crown of Life. 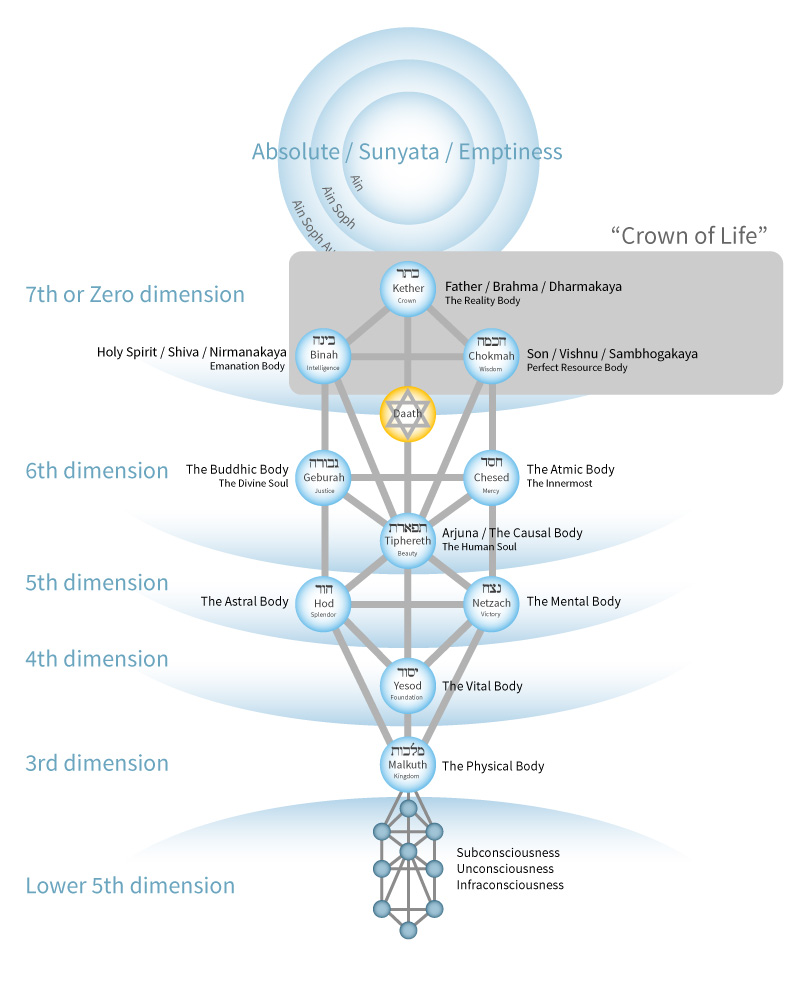 The Crown of Life on the Tree of Life of Kabbalah

The Crown of Life is the eternal breath, profoundly unknowable to itself. It is a breath of the Absolute within us. It is that pure ray from which the Innermost of each human being emanated. It is the Atmic thread of the Hindustanis. It is our “I Am.” “Whosoever knows, the word gives power to, no one has uttered it, no one will utter it, except the one who has the word incarnated.” Jesus incarnated the Word in the baptism.

The Cosmic Christ is called “Christos” by the Greeks, “Osiris” by the Egyptians, “Vishnu” by the Hindus, “Kuan Yin,” the Melodious Voice by the Chinese, “Avalokiteshvara” by Tibetans. The Cosmic Christ is the Army of the Voice, the great breath, the central sun, the Solar Logos, the Word of God.

Sequentially, after this Gnostic baptism (Da’ath), like a radiant sun, the Christ, filled with glory, resplendently shone with an immaculate divine white light within Jesus. Thus, this is how Jesus incarnated his resplendent and luminous “I Am,” and it was from that moment that the Buddha Jesus became Jesus Christ (the Son of Man).

“And the Word was made flesh, and dwelt among us…full of grace and truth.” “That was the true Light, which lighteth every man that cometh into the world.” - John 1: 14, 9

Within Christ there are no hierarchical differences. Within him we are all one.

"John bare witness of him, and cried, saying, This was he of whom I spoke, He that cometh after me is preferred before me: for he was before me." - John 1: 15

“And of his fullness have all we received, and grace for grace” [John 1:16], thus, whosoever incarnates his Inner Christ will become Him as well.

Many Buddhas incarnated Christ in the past, and in the future, many Buddhas will incarnate the Lord. Understand that no one can receive the Crown of Life without first having lifted his seven serpents upon the staff.

We have to become dwellings of the Lord.

"And as Moses lifted up the serpent in the wilderness, even so must the Son of man be lifted up." - John 3:14

Understand that (like Jesus) we have to incarnate the Christ within us in order to ascend to the Father. Christ is not an individual. Christ is the Army of the Voice, the Word of God. No one comes to the Father but through the Son (the Cosmic Christ).

Within Christ we are all one. Within the Lord there are no differences between one man and another, because we are all one within him. Thus, individuality does not exist within him. So, the one who incarnates Christ becomes Him, Him, Him. “Variety is unity.”

Therefore, we have to finish with the personality and the “I” for in order for the Being to be born within us. We have to terminate our individualism.

If a mystic in a state of ecstasy abandons all of his seven bodies in order to investigate the life of Christ, he will then see his Self (his Glorian) represented in the drama of the passion of the Lord. He will then be his Glorian performing miracles and marvels. He will experience his Self dead and resurrected on the third day. That mystic will occupy the place of Christ, and in those moments he shall be Him, Him, Him, because in the world of the Christ there are no individuals. Within the Christ there is only one Being that expresses his Self as many.

When the “I” and the individuality are terminated, then only the values of the consciousness remain. These are the attributes of eternal Absolute Abstract Space, who only can say, “I Am the way, the truth and the life. I Am the Light. I Am the Life. I Am the good shepherd. I Am the door. I Am the bread. I Am the resurrection.”

This is how the Being receives the Being of his Being, his “I Am,” which is a breath from the Great Breath within each one of us, our particular ray, He, He, He. The “I Am” is the Inner Christ of every human being, our divine “Augoides,” the Logos. Whosoever receives the Crown of Life has the right to say, “I Am He. I Am He. I Am He.”

Theosophists talk about the Monad, yet the Glorian is not the Monad, and nevertheless, the Monad emerges from him. He is our particular ray. That ray is a perfect triad. Only he can liberate us from the law of karma. He is the Logoic Ray of each human being. The end of the law is Christ.

The law of karma is merely the stepmother, the healer that cures us, that is all. Yet, in Christ we are free. Christ is the Logos, the Word. He makes of us free and powerful kings and priests. Whosoever receives the Crown of Life liberates his Self from the law of karma.

He is the Army of the Voice, our resplendent dragon of wisdom. He is the Crown of Life, faith, the Word, the crown of justice, the Christ. Under the law we are slaves, yet in Christ we are all free because the end of the law of karma is Christ.

"Be thou faithful unto death, and I will give thee a crown of life." - Revelation 2:10

The attributes of the eternal “I Am” are within the Army of the Voice. Therefore, discard all of your idolatries, religions, schools, sects, orders, and lodges and seek your resplendent and luminous “I Am” who dwells within the depths of your Being. He is your only savior.

Christ is the Army of the Voice, who is the unique Being, the Being of all Beings, the sum total of all the attributes of eternal Absolute Abstract Space. It is the total, impersonal, universal, and infinite Cosmic Christ... Christ is a multiple perfect unity. “And the light shineth in darkness; and the darkness comprehended it not” [John 1:5].

Christ is the Solar Logos, is the Army of the Voice, which is an eternal, unconditioned, and multiple perfect unity. He is the creative Logos. He is the Word of the first instant. He is the Great Breath emanated from within the bosom of the Eternal Absolute Abstract Space. Christ is the Army of the Word, the Eternal Absolute Abstract Space, which is the Being of the Being within all Beings. It is the Absolute, the Unutterable Name, the Limitless Space. Whosoever incarnates his Christ becomes Christified and thus enters into the ranks of the Army of the Voice.

In Egypt, the Christ was called Osiris, and whosoever incarnated him was an Osirified being. Among the Aztecs, the “I Am” is named Quetzalcoatl.

"And the light shineth in darkness; and the darkness comprehended it not." - John 1:5

By purchasing a print edition of "Major Mysteries", you get a high quality, permanent source of profound knowledge, you help us print more books, keep this website online, and allow us to give free books to prisoners, churches, libraries, and more.
Pick a Bookseller