1. "And I will give power unto my two witnesses, and they prophesy a thousand two hundred and threescore days, clothed in sackcloth.

"These have power to shut heaven, that it rain not in the days of their prophesy: and have power over waters to turn them to blood, and to smite the earth with all plagues, as often as they will." - Revelation: 11: 3-6

2. The two witnesses of the Apocalypse (Revelation) are our two ganglionic cords through which the semen rises towards the chalice of our head.

3. When the virile member is withdrawn from the vagina, without spilling the semen (without reaching the orgasm) , the semen then rises through the two ganglionic cords to the chalice (the brain).

4. These two ganglionic cords are known in the Orient as Ida and Pingala. 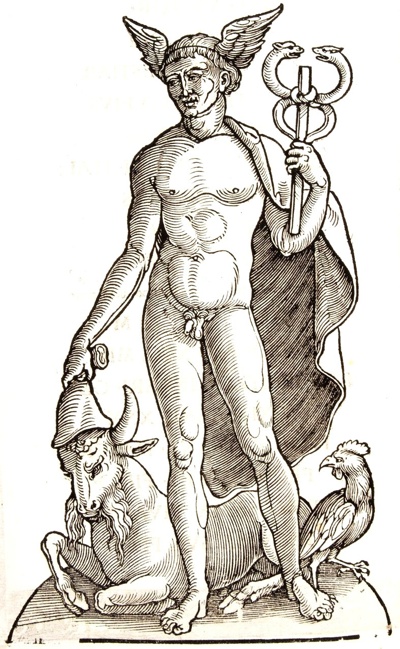 Mercury holding the Caduceus, a symbol of the two nerve channels around the spine

6. The semen rises to the head through these two nerve channels when we restrain the animal impulse.

7. These are the two witnesses, the two olive trees, and "the two candlesticks standing before the God of the earth."

8. These are the two Uraeus from the South and from the North that shine on the forehead. 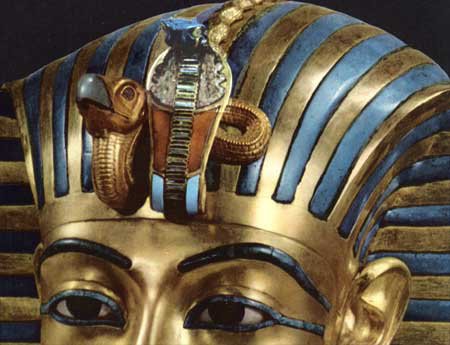 9. This is why the ancient kings had two crowns upon their heads and the sacred serpent upon the mid-brow.

10. The solar atoms of our seminal system rise through the right ganglionic channel.

11. The lunar atoms of our seminal system rise through the left ganglionic channel.

12. The right ganglionic cord is related with the left nasal cavity.

13. The left ganglionic cord is related with the right nasal cavity.

14. When the solar and lunar atoms of our seminal system make contact near the Triveni, which is in the chakra Muladhara situated in the coccyx, the Kundalini awakens and enters through the inferior orifice of the spinal medulla.

15. The ascension of the Kundalini depends on the merits of the heart.

16. The solar and lunar atoms of our seminal system make contact with the coccygeal bone when we learn to withdraw from our spouse without spilling the semen (without reaching the orgasm) .

17. In the temples of Lemuria, men and women entered sexual contact in order to reproduce the species, but none of them spilled the semen (reached the orgasm) .

18. The divine hierarchies utilized one sperm in order to fertilize the womb. One sperm easily escapes from the hormonal vessels.

19. There is no need to fornicate to reproduce the species.

20. Seminal ejaculation is an exclusive property of the animal species, but not of the human species.

21. The human being must make his semen rise through the two ganglionic cords to the chalice (the brain).

22. The black magicians were the ones who taught the human being how to ejaculate semen like the animals.

23. The black magicians of the opposite pole of the sanctuary of Vulcan taught the human being black Sexual Magic. This was their treason to the mysteries of Vulcan.

24. The mysteries of sex are from the sanctuary of Vulcan.

25. The guardians of that sanctuary committed the crime of betraying the mysteries when they allowed themselves to be seduced by those brothers of darkness.

26. Black magicians ejaculate the semen during the acts of negative Sexual Magic.

27. The serpent then descends towards the infernos of the human being.

28. The tail with which Satan is represented is the Kundabuffer of black magicians. That tail is directed downwards towards the infernos of the human being.

29. When the serpent ascends, it represents the bronze serpent ( Kundalini ) that healed the Israelites in the wilderness.

30. When the serpent descends it signifies the tail of Satan (Kundabuffer). That tail is the tempting serpent of Eden, the horrible Python serpent with seven heads that the enraged Apollo wounded with his darts. 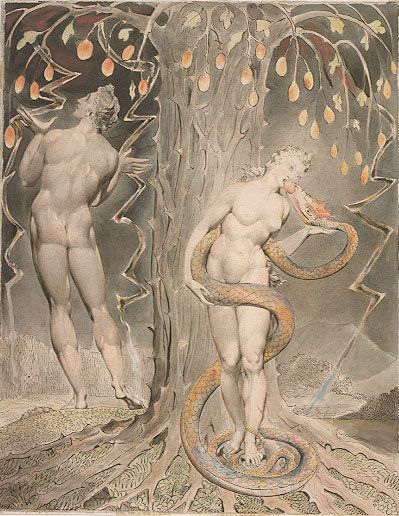 31. The serpent of fornication (Kundabuffer) is damned.

32. "And the Lord Jehovah said unto the serpent, because thou hast done this, thou art cursed above all cattle, and above every beast of the field; upon thy belly shalt thou go, and dust shalt thou eat all the days of thy life." - Genesis 3:14

33. We must reject the tempting serpent of Eden.

OF NOT [LETTING] OSIRIS NU, TRIUMPHANT, BE BITTEN BY SNAKES (OR WORMS) IN THE UNDERWORLD

34. He saith, "O Serpent! I am the flame which shineth upon the Opener of hundreds of thousands of years, and the standard of the god Tempu," or (as others say) "the standard of young plants and flowers. Depart ye from me, for I am the divine Maftet."

35. We must reject the tempting serpent of Eden and we must not spill the semen.

36. "Osiris Ani, triumphant, saith, "I am the great One, son of the great One; I am Fire, the son of Fire, to whom was given his head after it had been cut off. The head of Osiris was not taken away from him, let not the head of Osiris Ani be taken away from him. I have knit myself together; I have made myself whole and complete; I have renewed my youth; I am Osiris, the lord of eternity." - The Book of the Dead, Chapter 43, "Of not letting the head of a man be cut off from him in the underworld"

38. After being slaughtered, the head is delivered to the Osiris of the Master.

39. We pass through the slaughter of John the Baptist when the sacred serpent passes from the vertebrae of the neck to the head.

40. No one cuts the head of the Innermost, however, we must avoid falling into the abyss.

41. We become complete and we become owners of eternity, filled with eternal youth, when we have raised our Kundalini upon the staff, as Moses did in the desert. 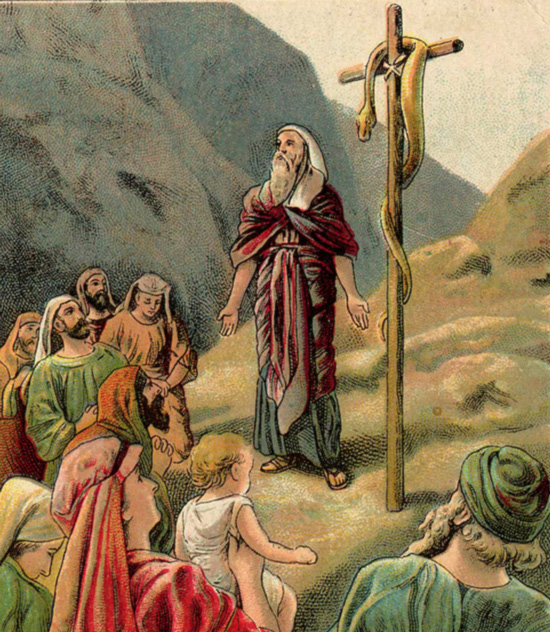 42. We must transform ourselves into divine crocodiles.

43. "The overseer of the house of the overseer of the seal, Nu, triumphant, saith, "I am the divine crocodile which dwelleth in his terror, I am the divine crocodile, and I seize my prey like a ravening beast. I am the great and mighty Fish which is in the city of Qem-ur. I am the lord to whom bowing and prostrations are made in the city of Sekhem." - The Book of the Dead, Chapter 88, "of making the transformation into a crocodile"

44. This divine crocodile is the Innermost.

45. It is the divine crocodile that seizes its prey like a ravenous beast.

46. These prey are the psychic extractions of all the vehicles of the Innermost that He assimilates in order to self-realize Himself as a Master of the Mahamanvantara.

47. The Innermost is the great and mighty fish that emerges from the waters of life in order to create the interior universe.

48. He is the Lord who lives within us, and before whom we bow and prostate.

50. The serpent Rerek is the serpent of fornication that trembles before the living God and that crunches the bones of the filthy cat, by sinking it into the abyss of desperation.

52. The divine crocodile Sebek is the Innermost.

53. The Innermost is the flame with three small wicks.

54. These three wicks are the Divine Soul, the Human Soul, and the Christ-Mind.

56. It is necessary to not spill even a single drop of semen.

57. It is necessary to make our seminal energy rise to our brain through the two ganglionic cords, in order to make the sacred serpent Kundalini rise up the spinal medulla, through the thirty-three medullar vertebrae.

58. Terrific powers exist within each one of the thirty-three vertebrae.

59. As we enter each one of the thirty-three holy chambers, we learn divine wisdom.

60. These are the seven loaves of bread brought as food to Horus.

61. We must eat from these seven loaves of bread.

65. Let us eat from the seven loaves of bread. Let us be nourished with divine wisdom.

66. We must make our seminal energy rise through the two witnesses.

67. These are the two olive trees of the temple.

68. These are the two candlesticks that are standing before the God of the earth. 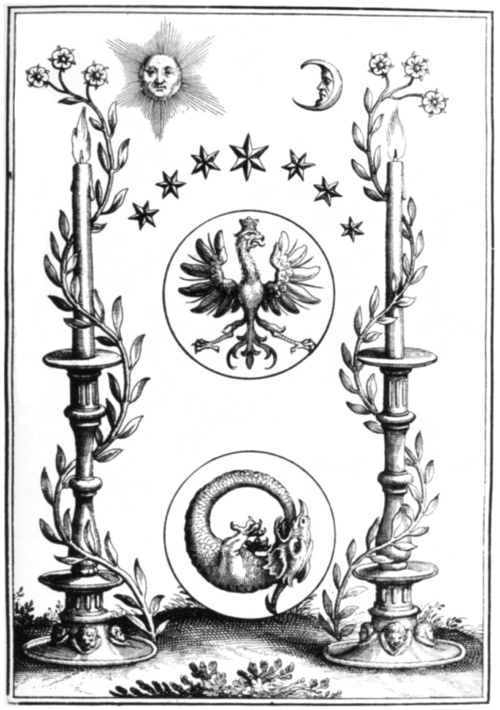