1. "In the beginning God created the heaven and the earth.

"And God said, Let there be light: and there was light.

"And God saw the light, that it was good: and God divided the light from the darkness.

"And God called the light Day, and the darkness he called Night And the evening and the morning were the first day.

"And God said, Let there be a firmament in the midst of the waters, and let it divide the waters from the waters.

"And God called the firmament Heaven, And the evening and the morning were the second day.

"And God said, Let the waters under the heaven be gathered together unto one place, and let the dry land appear: and it was so. And God called the dry land Earth; and the gathering together of the waters called he Seas: and God saw that it was good." - Genesis 1:1-10

1. If a human being wishes to create his bodies of liberation in order to self-realize as a Master of the Mahamanvantara, he must then create as God did, by fecundating his seminal system in order for the interior universe to emerge from it.

2. The Chaos is the semen. If we wish to create as the Gods, we must fecundate the Chaos with the vivifying fire in order for our bodies of perfection—with which we realize ourselves as Masters of the Mahamanvantara—to emerge from it.

3. The Chaos is a mixture of water and fire.

4. The Chaos holds the seeds of the cosmos.

5. The water of the Chaos is the receptacle of the fire. 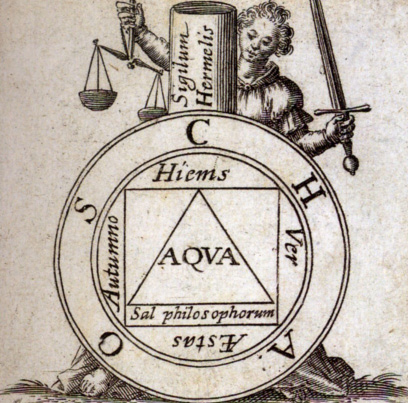 The seventh key of Basil Valentine explains that the Chaos transforms the Salt when in a Hermetically sealed vessel.

6. The earth is reduced to water, and the water is the receptacle of the fire.

7. Our material body, which is our individual earth, is reduced to the water of the semen. Thus, if we fecundate the Chaos of the semen with the fire of the Spirit, the Child of Gold of sexual alchemy emerges. He is the intimate Christ who ascends to the Father and who makes us kings and queens, priests and priestesses of the universe.

8. Genesis is a book of alchemy.

9. Hence, if we wish to create our interior universe, we must create as God did when He created the universe.

10. It is necessary to divide the waters from the waters in order to place these (the waters) above, in our divine heaven (firmament), where the glory of the Innermost (Spirit) shines. This is achieved by placing what is material and crude into the profundity of the abyss, and by raising our christic force by sublimating our seminal energy.

11. This is a work of sexual alchemy.

12. This is why Hermes Trismegistus stated,

"Separate that Spirituous earth from the dense or crude by means of a gentle heat, with much attention. In great measure it ascends from the earth up to heaven, and descends again, newborn, on the earth, and the superior and the inferior are increased in power." - The Emerald Tablet

13. This is our blessed work of the Great Work.

14. It is necessary to work over our Chaos in order to separate the darkness from the light and to give to the darkness the abode of our God.

15. We must make Genesis within ourselves.

17. The Chaos of the universe resides here and now in our seminal system. If God had to fecundate the waters of the Chaos with the fire in order to create the universe, we must do the same by fecundating the waters of our Chaos, which is our semen, with the fire of the Kundalini . This is done in order to make our interior universe emerge and to convert ourselves into ineffable gods. This is known as sexual alchemy.

18. The supra-celestial waters of the Chaos are pure semen, and from this semen the universe emerged.

19. This supra-celestial water of Genesis is a very pure, flexible, and inflamed substance, but it never consumes itself.

20. This is the Paradise where Adam lived before the downfall.

21. Let us fecundate the Chaos (semen). Let us divide the waters from the waters, by placing what is material and crude into the abyss and by placing the divine and sublime within our interior firmament. This is how we can convert ourselves into gods of the universe.

23. Let us create light, brothers and sisters, let us create it by extracting the light from the darkness by means of Sexual Magic.

24. The light is good; let us depart from the darkness.

25. Let us divide the waters from the waters—in other words, the light from the darkness—and let us gather the tenebrous waters in the abyss in order to discover the dry matter, which is a rich interior universe, the bodies of perfection. Thus, we self-realize as Masters of the interior and the delicate Eden, where the lights of heaven shine and from where every living creature emerges.

26. Let us perform Genesis within ourselves, by means of sexual alchemy.

27. The book of Genesis is a treatise of sexual alchemy.

28. The superior agrees with the inferior.

29. The macrocosmic Chaos is also in the microcosms.

30. The waters of the Chaos are in our sexual glands.

31. These waters are the semen.

32. If God had to fecundate the waters in order to create the universe, then we must do the same within ourselves.

33. These waters are the semen of our sexual organs.

34. So, we have then found the key of perpetual movement.

35. Thus, when we will be gods, we will make majestic universes emerge from within the terrific profundity of our superlative consciousness, by fecundating the semen with the fire.

36. When the disciples and Masters want to enter a new initiation, they must then ask to the Logos of the solar system.

37. However, when the Master is liberated from the four bodies of sin, he does not need to ask to enter because he has entered the worlds of the gods, and he is also a god.

38. The Master who has reached these heights knows that in order to enter a higher initiation he must fecundate his Chaos in order to make new internal creations. This signifies new responsibilities before the karmic laws.

40. The more grandiose these internal universes are, the more karmic responsibilities the creators have.

41. This is why we, the Buddhas, do not need to ask the Logos in order to enter new initiations.

42. We, the Buddhas, now have a sufficient age in order to comprehend the solemn responsibility of any interior creation.

43. The Logos, who is now capable of creating a solar system and crystallizing it with the tattvas, has a very grave karmic responsibility, immensely more grave than that of the Arhat.

44. A Logos creates when fecundating his own sexual seminal Chaos.

45. Therefore, we convert ourselves into ineffable Gods, into Solar Logos, into Constellar Logos, etc., by fecundating our Chaos.

46. The book of Genesis encloses the key of continuous movement.

47. The book of Genesis is a book of palpitating actualities.

48. The book of Genesis is a treatise of sexual alchemy.

49. We have now found the key of perpetual movement, the Elixir of Long Life, and the Philosophical Stone.

50. We must now enter the world of the Gods.

51. There is the necessity to enter the kingdom of the Super-man.

52. We must elevate ourselves to the supra-human kingdom.

53. We must convert ourselves into hierarchs of the fire.