1. In chapter six, we spoke of the white elixir and the red elixir in their profound aspects.

2. In that chapter, we found the white elixir and the red elixir in the hermaphrodite Spirit, within the Master of metallic transmutations.

3. We studied how the hermaphrodite Spirit transmutes lead into gold.

4. Now, in this chapter, we will study the white elixir and the red elixir acting as the Sun and the Moon. 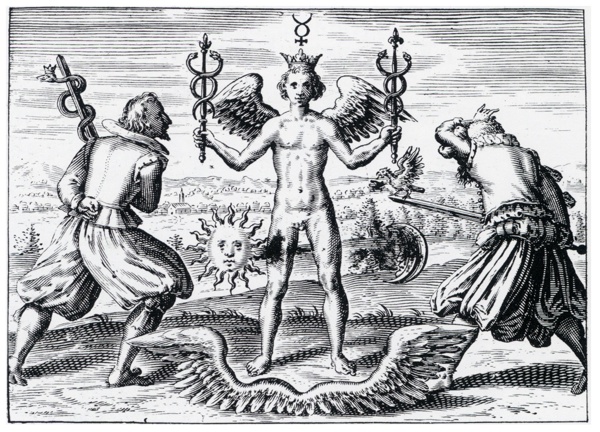 The Second Key of Basil Valentine.

6. These are the white and red elixirs.

7. These are the powders of projection, with which we transmute all our metals into pure gold.

8. The red elixir is male Mercury.

9. The white elixir is female Mercury.

10. The crude Mercury—which means the female Mercury—cannot tolerate the fire except with the help of a different Mercury, which must be totally warm, dry, and more digestible.

11. By means of Sexual Magic, male Mercury becomes fluid when it is mixed with the female Mercury.

12. The two Mercuries are then insolubly united in a completely inseparable manner, as when water is united with water.

13. Masculine Mercury takes the phlegm and the lunar coldness from the feminine Mercury, first turning it black, then red, then white, and then various colors.

14. This is how the woman transmutes her metals into pure gold, by means of the sexual act with the man.

15. Our Mercury, after its many transformations, has the power to change our metals into pure gold.

16. The white and red elixirs are the two Mercuries, with which we transmute all our metals of our personality into the pure gold of the Spirit.

18. We must not work with the Sun and with the Moon unless they have been reduced to the Mercury of Philosophy.

19. Let us take the Mercury from the Sun and from the Moon, in order to work with this venerable matter in the Great Work.

20. It is necessary to reduce the Sun and the Moon to the crude matter of the Great Work in order to elaborate the king crowned with the red diadem.

22. However, this is possible only by reducing these two Mercuries to the Sun and to the Moon.

23. This reduction is performed through the loving union of man and woman. 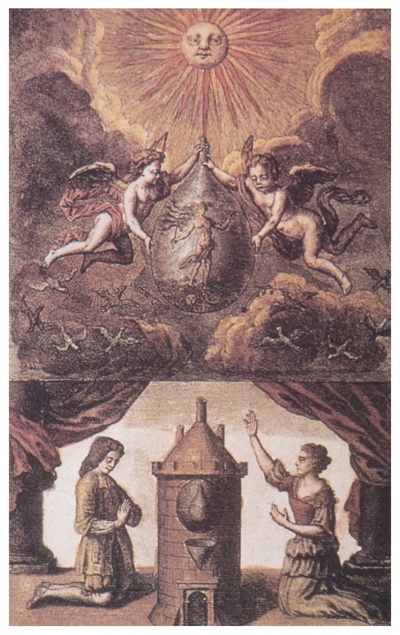 24. When the man is reduced to the Sun and the woman to the Moon, we then disarrange the compound with the very elements that they are compounded with. Thus, with this crude matter, within we can engender the Heavenly Man, the Sun King, the Master of the White Fraternity, filled with glory and power.

25. This is how our Mercury is united with the Sun and with the Moon, and this is how the Sun and the Moon are reduced to the semen—that is to say, to Philosophical Mercury.

26. Mercury is insolubly united with other bodies only when they have been elevated to their own nature.

28. If we have a ring of gold, and we wish to convert it into a cross, we must inevitably melt the gold and reduce it to its crude matter, to its Mercury of Philosophy, in order to elaborate the cross of gold with this crude matter.

29. As well, the human being must reduce himself to the semen that engendered him, in order to elaborate the Master of Major Mysteries of the Universal White Fraternity with this semen.

31. Let us remember that the Holy Bible begins with Genesis, teaching us sexual alchemy.

32. Let us remember that the first miracle that Christ made was in the nuptial wedding of Cana. 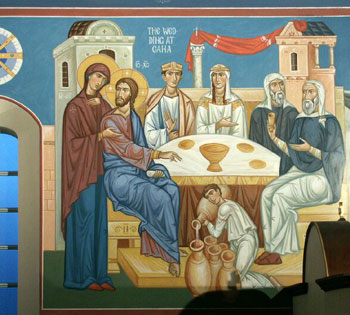 33. The Master transmuted water into wine.

34. Likewise, we must transmute the water of our sexual Chaos into the wine of light of the alchemist.

35. The first teaching that Christ gave us was sexual alchemy.

36. If we take a look at all of creation, we will see that all beings have been sexually engendered.

37. We were engendered by a man and a woman.

38. Therefore, if we wish to be Masters, we must then engender a Master. Everything that exists in the universe has been engendered.

40. However, the two Mercuries are insolubly united with the fire.

41. The union of the two Mercuries is verified by means of sexual union.

42. This is the secret in order to reduce the two metals to their crude matter.

43. When the two metals are inseparably united, they have the aspect of a white powder, and they engender suns and worlds within the infinite.

44. By fecundating the Chaos, internal life emerges in all its splendor.

45. With one ounce of this powder of projection, we can form millions of suns, and we can transmute every kind of metal from one mine into a moon.

46. The powders of projection are the white and red elixirs.

48. The white elixir whitens the metals, giving them an immaculate whiteness.

49. The red elixir transforms lead into gold, and it yellows everything.

50. The wings of Mercury elevate us to the world of the gods.

51. Mercury is the messenger of the ineffable gods.

52. The Mercury of Secret Philosophy converts us into the king crowned with the red diadem.

53. The joining of the Cross with the Triangle is performed with the Mercury of Secret Philosophy.

54. The wings of Mercury convert us into omnipotent gods of the universe. 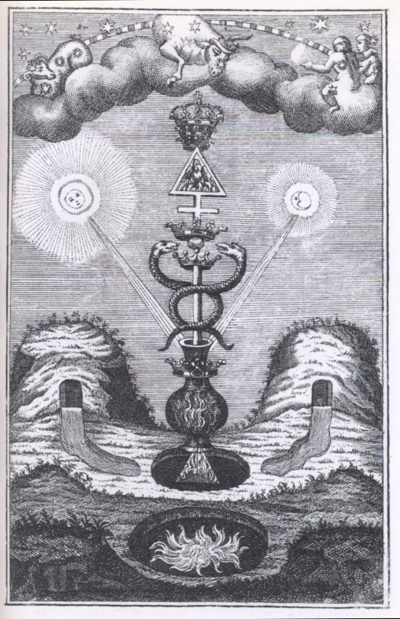 Everything taught in this book is synthesized in this image. Note the crowned symbol of sulphur. Illustration from A.T. de Limojon de Saint-Didier, Le Triomphe hermétique (1689).