The Staff of the Patriarchs

Beelzebub, increasingly more anxious for wisdom, was faithfully and sincerely accomplishing all of the commands which his sinister instructor gave to him.

He knew the course of his seminal currents, and he awoke his Kundalini negatively through the procedures of fornication and concentration, as taught by necromancy.

The twilight of the cosmic night extended the velvet of its mysterious wings over the profound valleys and over the enormous and gigantic mountains of ancient Arcadia. The corpulent, millenarian trees, the last offspring from unknown parents, had already seen their autumn leaves falling during many long years, but now they seemed to definitively wither in order to fall into the arms of death.

Our current human bodies in those times resembled human phantoms, and the Innermosts of our present humanity had already received their more fine vesture.

Terrible earthquakes shook Arcadia and everywhere a breath of death was sensed.  From the enormous multitude of human beings, two types of creatures were the outcome: Angels and demons.

The ancient beauty of Beelzebub, the handsome gallant of Arcadia, had disappeared.  His body was covered with hair and he took on the resemblance of a gorilla.  His eyes took on the criminal and horrible aspect of a bull.  His mouth became gigantic and, with its horrible teeth, presented as the snout of a voracious beast.  His head with its enormous mane and his deformed and gigantic feet and hands gave him the aspect of a horrible, corpulent, and enigmatic monster.  This was Beelzebub, the enigmatic and handsome gallant of ancient Arcadia... 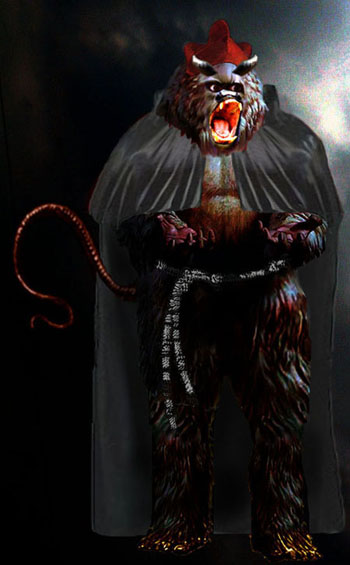 Was this the cup of wisdom from which he had wanted to drink?

In order to reach such horrible monstrosity, did he have to pass all of those sacred initiations in the temple?  Was this the nectar of science or the liquor of wisdom for which he was longing?

Wisdom, divine treasure,
Thou burns me with thy fire,
when I want to cry, I do not,
and if I do, Thou consoles me.

There was an old woodsman of the country,
who did not know how to read nor write.
He only loved the edge of his ax;
yet, he felt a longing for life.

He was watering the furrows with his tears,
while feeling love for Wisdom.
His pale cheeks were smiling
when he inebriated himself with love and poetry.

Wisdom, liquor of Gods,
is a liquor which poisons,
thus, in a very hard way my spirit will come:
Terrible, oh God of mine, is this torture of waiting.

Wisdom, for thee, I raise my cup,
since I am tired of crying.
Wisdom, to thee I chant my strophes
and await within the roses,
the love that must come.

Wisdom, divine treasure,
Thou burns me with thy fire,
when I want to cry, I do not,
and if I do, Thou consoles me.

Thus, the Kundalini awakened in a negative way and converted Beelzebub into a tenebrous potency of nature.

During passionate fornication, the black magicians take advantage of the moment of seminal ejaculation by means of mental concentration. This is done in order to exert the ascension of the vitalizing hormones, that are segregated by the sexual glands, towards the head.  Then, with their mind, they take the hormones into the heart, which then sends them towards the big toe of the right foot.  This is how they awaken their Kundalini in a negative way, and convert themselves into the monster with seven heads to which the Book of Revelation (Apocalypse) refers.

The tail of the demon (the Kundabuffer) is a prolongation of the Astral counterpart of the coccyx and is the result of the movement of the serpent, downwards, towards the earth.

The Kundalini is the Staff of the Patriarchs, the Rod of Aaron, the Reed of Brahma and the Scepter of the Gods.

The positive awakening of the Kundalini is accompanied by a great festivity within the temple.  Terrible pain is produced in the coccyx.  Afterwards, the serpentine fire opens its way upwards, towards the head.  The passing from one canyon into another is performed in accordance with the moral merits of the disciple.  These canyons are the vertebrae of the spinal column; they are also called pyramids.

Any unworthy action takes the Kundalini of that disciple out from one or more canyons, in accordance with the magnitude of the fault.  There are 33 canyons that we must conquer in order to reach the High Initiation, that is, the union with the Innermost.

The two 3’s when united are the symbol of the union of the matter with the Spirit, the perfect circle of eternity whose center is everywhere and whose circumference is nowhere.

The High Initiation is performed when the Kundalini has already reached the head, but in order for the Kundalini to triumphantly rise through the 33 canyons, it is necessary to practice in detail all of the teachings of the holy Gospels.  In order to reach the High Initiation, we must first pass the nine arcades, that is to say, the nine Initiations of Minor Mysteries.

All of the powers of the human being are awakened according to the ascension of the serpentine fire through the spinal column, since each canyon has its occult name and is related with specific powers.

A certain Master of Major Mysteries said that before reaching the High Initiation, he had the weakness of falling into a certain fault; therefore, his Kundalini descended four canyons.  Consequently, in order to reconquer them again, he had to struggle very much.

The ordeals of Initiation are extremely severe.  The disciple has to follow a perfect, holy and chaste path.  Thus, when reaching the Innermost, the human being becomes converted into a Master of Major Mysteries and into a Theurgist.

By purchasing a print edition of "Revolution of Beelzebub", you get a high quality, permanent source of profound knowledge, you help us print more books, keep this website online, and allow us to give free books to prisoners, churches, libraries, and more.
Pick a Bookseller
Share This Page: