Deep down, the solar system Ors in which we live, move, and have our Being is like a great molecule that develops and unfolds within the spiral organism of the vibrant Milky Way.

The different scientific concepts about atoms are in their depth exclusively provisional. Splitting the atom by no means signifies absolute knowledge of the structure of the atom, or about the complex intimate mechanisms of molecules, sub-atomic corpuscles, and electrons. The Saturnian concept of atomic structure is very empirical; any scientific or supra-scientific opinion is very relative and unstable.

We Gnostics emphatically affirm that besides protons, electrons, neutrons, etc., there are many other corpuscles that are still unknown to official science. There is a formidable structure—absolutely unknown to the official science—within the atomic nucleus. The scientists already split the atom in order to release nuclear energy, yet indeed they know nothing about the intimate, intra-corpuscular structure of the electron.

Under the light of the new culture initiated in the world by the Gnostic Movement, we can consider the electron like the prime crystallization of what the Hindustanis call Akasha, which is the prime matter of the Great Work, the unique substance from which—by means of chained crystallizations—the multiple substances, the different elements of Nature come to be.

Undoubtedly, the electron is an extraordinary, prime crystallization of a supra-atomic character. Any atom, any electron, has its origin within the living womb of pure Akasha, the primordial substance, the Mulaprakiti of Hindustanis, the Chaos, the universal seminal waters of Genesis, the eternal feminine, symbolized by all the feminine deities of ancient religions, the Great Mother, Isis, Adonia, Insobertha, Rhea, Cybele, Vesta, Mary, Tonantzin, etc.

Undoubtedly, this fundamental substance, this Akasha, this prime matter of the Great Work, is the Divine Mother, Isis, the adorable Virgin of all the ancient religions, always full of grace.

She initiates her processes of condensation or crystallization when the Third Logos fecundates her with the flaming fire, by means of the sexual connubium of the Word.

She remains in her [virginal] insipid, unsubstantial, odorless state during the cosmic night, during the great Pralaya, when the universe that existed ceases to exists. However, the Cosmic Christ, the Second Logos, enters her womb, the great womb, through the fire of the Third Logos that makes her fecund; thus, this is how the Cosmic Christ is born from her and within her in order to be crucified in the worlds. This is why she is always represented with a child in her arms, namely, Isis with the child Horus in her arms, Mary with the God Child in her arms, etc.

Thus, many fields of force are originated under the impulse of the Third Logos within the fecund womb of the Great Mother, where the waves—that we can call pre-matter—are condensed into corpuscles.

Modern scientists know nothing about the mystery of the atomic nucleus, which they consider to be formed by protons and neutrons; they know nothing precise about the nuclear forces.

All planetary material is scientifically constituted by wonderful atoms, which beyond any doubt are considered the smallest particles of the elements. 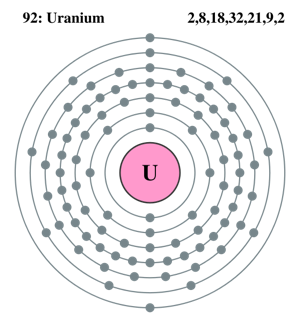 An illustration of the atomic structure of uranium, the 92nd element.

Every atom is a true universe in miniature. Every atom is a trio of matter, energy, and consciousness. The atom is constituted by a nucleus or a very radiant sun that is charged positively with electricity. The infinitesimal electrons, charged negatively, happily spin, dancing around the nucleus. The atomic nucleus is similar in all elements, as well as the electron; the elements vary from each other solely by the number of electrons submitted to the nucleus, and by variations corresponding to their charge.

The atom is a whole solar system in miniature. Exactly what the Sun is to the solar system, and the fecundated egg to the human body, is the atomic nucleus with respect to the whole atomic universe.

It has been said unto us that the diameter of the atomic nucleus can be about one ten thousandth of the whole atom. Thus, like Jupiter to the Sun, it is stated to us that its electrons can measure a tenth of diameter of its nucleus; therefore, in their own scale the electrons circulate in an immensity, a gigantic and deep space like the one that includes in its totality the planet Earth and the other planets of the solar system of Ors.

Nature has many elements, and these are now [as of this writing in 1967] catalogued thanks to the number of electrons from 1 to 96. The hydrogen with one electron has the atomic number 1; helium with two electrons, 2; etc.; thus basically, with two exceptions only, the elements developed within the womb of the Great Mother are different crystallizations from the primordial substance.

There are seven fundamental categories of density amongst the varied elements in Nature.

Each element is sexually attracted by the element that possesses the complementary number of electrons; behold the wonderful manner in which sodium, with an extra electron, is sexually inclined to chlorine, which lacks one electron; their combination forms salt. Here we have sex... Here we have the male and the female of the elements of Nature sexually united.

A positive metal is irresistibly impelled to be sexually combined with a negative metalloid, in an exact proportion to its contrast. This is an extraordinary platonic parallelism of twin souls, which look for their complementary half from which they were separated during the primary creation.

Undoubtedly, the active element in the Sun Christ is an infinite quantity of hydrogen. An hydrogen atom possesses one single electron that spins around its basic nucleus. An hydrogen atom is found at the border between matter in a molecular state and matter in an electronic state. The next state of subtleness of the hydrogen corresponds to free electrons, light, magnetic waves, a spiritual state.

In order to create an helium atom and two sun rays, it is necessary to consume four hydrogen atoms through the sexual energy of the Third Logos that overwhelmingly flows from the center of any atom—and any galaxy and any solar system—uniting opposite poles for new creations. Thus, hydrogen atoms combine with carbon atoms in order to initiate the development of light; namely, masculine atoms of single electron hydrogen bombard the feminine atoms of six electron carbon in order to originate seven electron nitrogen atoms. Then, nitrogen atoms sexually unite with new hydrogen atoms to become atoms of light-oxygen. When a light-oxygen atom is found in plenitude, one free electron and certain amount of radiating energy escapes from it; thereafter, an atom of heavy nitrogen is the outcome, that again is sexually bombarded by hydrogen; nevertheless, this time the obtained outcome differs, since another hydrogen atom captures one of the electrons of the nitrogen in order to form one helium atom with two electrons, whereas the nitrogen atom with seven electrons is reduced to an carbon atom with six electrons with which the cycle started, because the end is always equal to the beginning plus the experience of the cycle. That is the law. Thus, this is how the sexual cycle of carbon is closed. Solar light is sexually gestated in the ninth sphere (sex). The great solar light is the chemical and mathematical outcome of the different atomic, sexual processes of carbon.

Hydrogen atoms constitute a bridge between the universal spirit of life and matter of different densities.

The splitting of the atom, the nuclear blasts, release submerged abysmal matter—new, terribly malignant atomic elements: Neptunium (93), Plutonium (94), Americium (95), and Curium (96). Through atomic blasts these infernal types of terribly malignant atomic substances escape from the abyss, and attract to the surface of the Earth and into the mentality of people certain frightfully monstrous psychological characteristics.

The disintegration of the atom is a blasphemy, a scientific madness, that not only brings physical damage to this afflicted world, but also mental, psychic monstrosities, frightful infernal types of abominations, etc.

If instead human beings would study solar energy and learn how to use it intelligently, liquid fuel would be eliminated and the conquest of the space would become a fact, on the condition of upright behavior. Where a solar ray of light can reach, human beings too will reach. Solar energy is a million times more powerful than atomic energy. This great molecule, this solar system of Ors, works marvelously thanks to the terrific potential of solar energy.