In Nirvana, the significance of family, tribe, clan, has disappeared, since all the beings there consider themselves equal members of a great family. Variety is unity. Nevertheless, all of us, the brothers and sisters, have been able to verify by means of observation and experience that there is a sort of family in each one of the groups of Elohim or Prajapatis who govern the different solar systems of this galaxy in which we live. The sense of cosmic association amongst each group of Elohim makes of them something like ineffable, divine, sublime families.

So, the cosmic family who governs our solar system of Ors in which we live, move, and have our Being, has amongst its more distinguished members Gabriel, Raphael, Uriel, Michael, Samael, Zachariel, and Oriphiel. Each of these mentioned brethren is a chief of angelical hosts; each of these brethren has to work intensely in the Great Work of the Father. 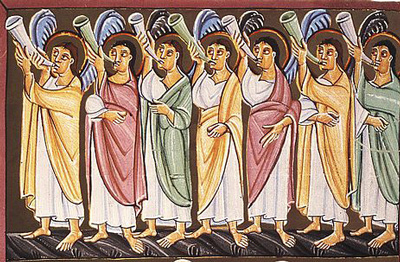 Each regent genie is the indweller of a cosmic temple, a planetary temple, which is always found in the core of each sphere, of each planet.

In the Astral Body, any Master of the White Lodge can visit the heart temple of the planet Earth. The genie of the Earth is the one the Bible refers to as Melchizedek, Changam, the king of the world.

It has been said to us that the genie of the Earth has a physical body similar to ours, yet eternal, immortal. Some Lamas from Tibet have had the great joy of having met Changam personally.

The genie of the Earth lives in the subterranean kingdom of Agartha in company of the Initiate survivors of Lemuria and Atlantis. The race of Agartha only waits for the degenerate Aryan Root Race that presently lives upon the surface of the Earth to perish by fire.

When all of us—the perverse ones of this Root Race—have perished, then they, the survivors of Lemuria and Atlantis, will mix with some select survivors from our present Aryan Root Race and will repopulate the Earth; they will originate the future Sixth Root Race. 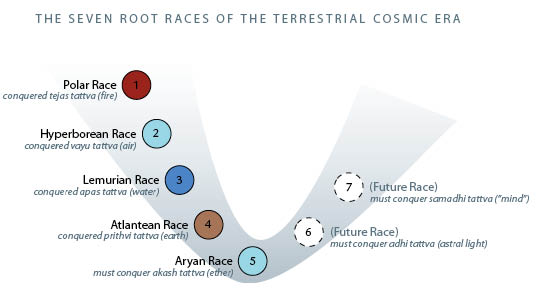 Within the interior of the Earth there are Lemurian and Atlantean survivors with physical bodies; these races possess all the scientific atomic inventions of ancient times.

The king of the world works intensely, and in his work is assisted by the Goros; these are great beings who govern life and death in all of the planes of cosmic consciousness.

The Earth is a living organism that spins around the Sun. The planetary genie keeps it firm in its march. The Earth is one of the members of the great cosmic family of the solar system of Ors. All the sidereal bodies next to this Earth—governed by Melchizedek, king of fire—comprise this complicated family.

Many varied objects are held in the bosom of the solar system of Ors. Nine known planets—governed by indescribable beings—orbit around the sun Ors, along with thirty-one known satellites, thousands of asteroids, comets, and many millions of meteoric particles. Although it seems incredible, and in spite of their number and of the enormous cosmic mass that all these bodies represent, more of the 99 percent of the matter of the solar system of Ors is totally concentered in the Sun. 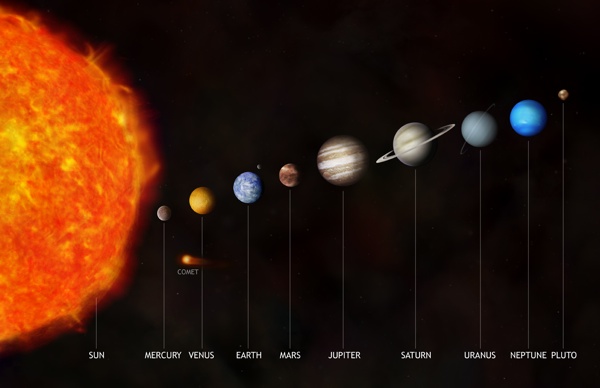 Indeed, the king star is the heart of the solar system of Ors. The Seven Chohans—who direct the seven great cosmic rays—live and work within the temple heart of the Sun, located in the center of that radiating sphere.

Few are the human beings of the planet Earth who can visit the temple heart of the Sun in their Astral Bodies.

A tremendous and frightful precipice leads the initiate to the vestibule of wisdom. Anyone who arrives at the sacred threshold must reverently prostrate himself before the guardian of the temple. A narrow path leads the visitant to the temple heart, where the seven Chohans dwell, terrifically.

The entire life of the solar system of Ors intensely palpitates in the heart of the Sun. The gravitational force of the Sun maintains the entire solar family within their mechanical orbits. All of the mechanics of the solar system of Ors march in accordance with the great law. The orbits concentrated in the planets—that dancingly spin around the sun, amidst the great symphonies of the cosmic diapason—are wisely related in accordance with Bode's Law. When taking the geometrical development 0, 3, 6, 12, 24.48, 96, 192, and adding 4 to each number, we obtain a series that more or less represents the distances between the planetary orbits and the Sun. Mercury—the Lord of science, the messenger of the Gods—moves around the Sun with a vertiginous speed. Venus the star of music, love and beauty, second in relation to the Sun, moves a little slower; and the Earth, our wretched, forlorn, and martyred Earth, that is third, moves under the wise direction of Changam or Melchizedek, in a yet slower manner.

Our beloved solar system of Ors neighbors a solar system named Baleaooto. The famous comet Solni in its orbit at times comes dangerously close to the shining sun Baleaooto, which is thereby forced to increase a very strong electrical tension in order to firmly maintain its habitual cosmic path. As is very natural and logical, this tension provokes the same identical tension in all the neighboring suns, among which is our Sun named Ors. This is the law of Solioonensius, that also affects the planets that rotate around their corresponding suns. The Earth cannot be an exception to this law of Solioonensius. The terrible electrical tension brings about bloody revolutions and frightful catastrophes.

In the ancient Egypt of the Pharaohs, Solioonensius manifested twice. In the first, the crowds in bloody revolution chose new governors by means of blood and death. They removed the eyes from all the governors of the ruling class. In the second manifestation of this cosmic law, the Egyptian crowds, frightfully infuriated, rose against their governors and killed them by skewering the body of each one of them with a sacred metal cable; this cable was dragged down and thrown into the river Nile. This novel 'skewer' seemed rather like a gigantic, macabre necklace.

The Bolshevik revolution was also the outcome of a Solioonensius.

Seen from afar, the solar system of Ors looks like a man walking through the unalterable infinite. Let us understand that the perception-moment of that comparable being—by one who contemplates the path of the Sun—is eighty years. Astronomers affirm that our solar system Ors travels towards the star Vega at the rate of twenty kilometers per second. The concrete fact is that in eighty years, the sun, leaving behind itself all the shining radiation of its wonderful system, victorious advances in the sacred space approximately 50,000,000,000 km (fifty billion kilometers). The sphere of radiation, the fire band, or the long and shining body of our solar system—in eighty years—is a figure five times longer than wide, and beautifully proportioned like a standing human body.

The attraction exerted by the Sun governs all the movements of the solar family. Thus, it is clear that the nearer the planets are, the greater their speed must be, in order to energetically resist the tremendous force of solar attraction.

The planets that compose the cosmic solar family vary in size, growing generally from the smallest—the quick Mercury, the messenger of the Gods, who is the nearest to the center—until the powerful thundering Jupiter, the father of all the Gods, which is at the middle of the distance between the center and the circumference, and thereafter the sizes of the planets diminish again to the most external well-known planet Pluto, which is a bit larger than quick Mercury.

After many years of observation and experience, it has been possible to verify, beyond any doubt, that the more remote the planets are, the slower their speeds are around the Christ Sun; indeed their speeds diminish from the fifty kilometers per second of Mercury, to the five of Neptune, the lord of occult wisdom, the king of the sea. 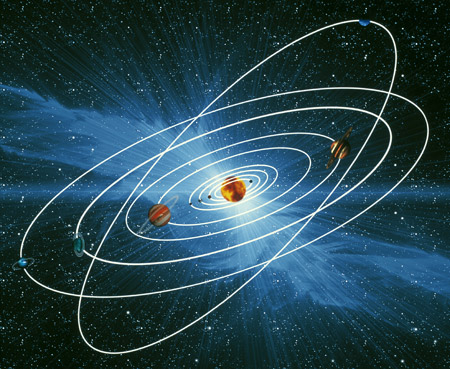 The cosmic figure of the solar system of Ors is extraordinarily complex and beautiful.

The planetary pieces, transformed into multiple spirals of several tensions and diameters, resemble a shining series of divine coverings that dim the long hot and white filament of the Sun Ors. Each one magnificently radiates its own characteristic heat and brightness; this marvelous combined conjunction is like a mysterious and sublime fabric, spiderweb net, splendidly woven with the multiple, eccentric trajectories of thousands of asteroids and long-haired comets, glowing with fire breath and jingling with a subtle and incredibly harmonious music, based totally on the three compasses of the Mahavan [large rhythm] and Chotavan [small rhythm] that sustain the universe firmly in its march.

Indeed, the solar system of Ors is a living cosmic creature who was born many millions years ago in the ninth sphere (sex). All human beings are similar in design and constitution—likewise happens to all the suns of the infinite space.

The cosmic design of humans and Suns is found in the Chaos, within the universal sperm.

The self-development of the Kosmos Man, or of the solar system, the enlightenment and gradual irradiation of one or the other, are the degree of self-generated consciousness of any solar cosmos, or any Kosmos Man. It totally depends on the same individual being.

The task of any universe and any Being, from the gigantic Sun to the insignificant cell, is to awaken consciousness.

The solar system of Ors will become more radiant as each of its worlds, each person, each living cell, is awakening consciousness.

All the human beings of the planet Earth have their consciousness asleep. It is impossible to experience that which is the Truth while the consciousness is totally asleep.

There are four states of consciousness:

Normally, people live in the first two states of consciousness. Yes, people not only dream when the physical body is resting, but people also continue dreaming in the wrongly named "vigil" state.

It is very rare is to find a human being with cognizance. Yet, sadly, people firmly believe that they have their consciousnesses already awakened.

It is impossible to arrive at objective knowledge if self-cognizance has not been obtained.

People live dreaming, they work dreaming, yet nevertheless they mistakenly believe that they are awakened.

The one who awakens his consciousness no longer dreams; he lives awakened in the internal worlds while the physical body is asleep.

As people awaken their consciousness, accordingly the solar system of Ors will become more and more radiant.

The solar system of Ors is Adam Kadmon, the Celestial Man born from the water and the fire in the ninth sphere (sex).

The solar system of Ors, the Kosmic Man, needs to be totally awakened in the cell and in the human being, in order to become more and more radiant.