The Ninth Key represents old Saturn falling and the Goddess Moon victoriously rising. Saturn is the lead and the Moon is the silver. The terrestrial Adam, the psychological “I” must fall and die so that the Adam-Christ can be born within us. We need to transmute the lead into gold. The lead of our personality must be transmuted into the gold of the Spirit.

The Moon-Mercury-Sophic (the Ens Seminis) must rise and return inwardly and upwardly.

The Adam-Christ is born from the seed. The grain, the seed, needs Thelema (willpower) in order for the Superman to heroically germinate; the birth of the Superman is not the outcome of evolution. The Superman does not need to evolve to attain perfection as is assumed by many students of occultism. Evolution is simply the movement of the universal life according to the concepts of time, space, and movement. All possibilities are contained within the evolving nature; thus, many become very good and others very bad. Nonetheless, the Superman is not the result of any sort of evolution but the outcome of a tremendous revolution of the consciousness. 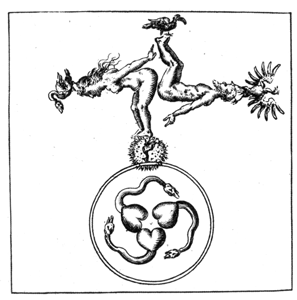 A rectangle appears in the Ninth Key, this represents the four elements of Alchemy. By carefully studying this rectangle, we discover a double circle that wisely symbolizes the mercurial matter with its two properties (generation and regeneration). The double circle contains three serpents that emerge from three hearts. Indeed, we need to work with Mercury, Sulfur, and Salt in order to lift the metallic serpent upon the pole. The Adam-Christ is born in us only by working with the Prima Matter: Mercury, Sulfur, and Salt; the Phoenix Bird that is born from its own ashes stands upon the double circle of Mercurial matter. We need to become imitators of this mythological bird; however, this is only possible when we work with the seed.

The eagle of volatility is the terrestrial Adam that is dominated by the crow of putrefaction. The Goddess Moon carries upon her head a white swan. We must whiten the crow with sexual transmutation until transforming it into the immaculate swan of Ascension. The entire symbolism of the Great Work is enclosed within the Ninth Key. No one can work with the Sephirothic Tree without being an Alchemist and a Kabbalist. The wise man of the Ninth Arcanum must search for the treasury within the Ninth Sphere. It is necessary to study the explanatory statements, the principles and methods of the science of Kabbalah and to work with the seed. “Practice without theory cannot exist.”

In the “authentic initiation,” this return to the point of departure is nothing more than the descent into the Ninth Sphere, which is a test of action for the supreme dignity of the great hierophant of mysteries.

All of the great Masters of humanity such as Hermes, Buddha, Jesus, Dante, Zoroaster, etc., had to pass through this utmost test. The following phrase is written upon the frightful threshold of the Ninth Sphere (which does not grant access to profaners): “Lasciate ogni speranza voi ch’entrate” (Abandon hope, all you who enter here).

The Zohar emphatically warns us that within the depths of the abyss lives the Adam protoplastus, the differentiating principle of the Souls . With this principle we have to dispute victory to the death. This fight is terrible, brain against sex, and sex against brain, and what is even more terrible and more painful is heart against heart, you know this.

In this sign the heart, brain and sex of the Genie of the earth are represented. The secret name of this Genie is Cham-Gam.

Each terrestrial stratum is guarded by terrifying guardians. Secret paths lead the disciple towards the heart of the earth. The double vital current of the Genie of the Earth is represented in the sign of the infinite.

The double vital current sustains and nourishes the entire planet Earth, thus, we (all the living beings) are organized upon this divine archetype. A Divine Atom exists in the center of the sign of the infinite. The nine spheres of atomic vibration are concentrically focused within this atom of the Genie of the Earth. The Holy Eight is resplendent with glory within the center of the Earth.

In the center of this Holy Eight the central atom is found, which is where the nine spheres of universal vibration are focused; this is the Law.

Any marriage that is a violation of the law is easy to recognize because on the day of the wedding, the bride appears bald. Since hair is the symbol of chastity for the woman, on wedding days of Nahemah it is prohibited to display hair, thus, she instinctively covers her hair with the veil (as if she is trying to conceal it).

Here we find those who abhor sex, for example, monks, anchorites, mystics, spiritualists, people from different pseudo-esoteric organizations, etc. All types of infrasexual people hate sex and consider themselves to be highly superior to those of normal sexuality. All of the taboos, restrictions, and prejudices that currently condition the lives of people of normal sexuality were firmly established by infrasexual people. Infrasexual people mortally hate the Arcanum A.Z.F. nevertheless, they give to themselves special credentials, and therefore, it is not difficult to find homosexuality within many convents and schools that are dedicated to spiritualistic or pseudo-esoteric studies. All of the crimes against nature are found in the infrasexual sphere of Lilith.

Nahemah seduces with the enchantment of her malignant beauty. Adultery is the outcome of this fatal enchantment. In the sphere of Nahemah we find the delectable cruelties from the kingdom of infrasexuality. In the atomic regions of the infrasexual sphere of Nahemah live the Don Giovanni types of men and Dona Ines or rather the beautiful Hetaeras, sometimes sweet and sometimes cruel in others. If people of normal sexuality do not live alert and vigilant, they can convert themselves into fatal proselytes of these infrasexual people, since they garnish themselves as Saints, Apostles, Anchorites, etc. and believe themselves to be superior; they go and cheat the people of normal sexuality, converting them into their henchmen. Understand that people of normal sexuality are those who have no sexual conflicts of any kind.

The sexual force of the people of normal sexuality is in perfect equilibrium with the spheres of thought, feeling, and will. These types of people do not abuse sex nor do they have any type of sexual aberrations.

Thus, the human life span of Mystical Ecstasy begins where the human life span of sexual enjoyment ends. After having attained the Venustic Initiation, in other words, after the Adam-Christ has been born within us, we must then extract the philosophical egg from the rottenness of the matter and deliver it to the Son of Man, meaning to transplant the totality of the sexual energies to Adam-Christ; this is how he becomes absolutely strong. The path is named Transmutation and Sexual Sublimation. Whosoever reaches these heights becomes a Master of Samadhi.

The same energy that produces sexual sensations (when it is transmuted) then produces mystical ecstasy. Christ, Buddha, Hermes, Quetzalcoatl, and many other Avatars were Suprasexual.

The Forge of Vulcan

All of the processes related with sexual transmutation are possible because of the intervention of the Vital Body. This is the Archaeous that elaborates the blood and the semen in the human organism. This is Vulcan that transmutes the seminal liquor into Christic Energy. The Vital Body is the vehicle of the Soul -Consciousness in the human being. The consciousness is the flame and the vital body is the wick. Vulcan exists within the Microcosmos and within the Macrocosmos, in the human being and in Nature. The great Vulcan of Nature is Eden, the Ethereal Plane.

Any alchemist fledgling (after having been crowned) is leaving the sexual act little by little; the secret connubial is more distant each time according to certain cosmic rhythms marked by the oriental gong. This is how the sexual energies are sublimated and transmuted in a continuous ecstasy.

The alchemist fledgling that worked in the magisterium of fire in former reincarnations performs this laboratory work in a relatively short time. However, those who for the first time work in the Great Work need at least (20) twenty years of intense work in order to enter into the second part, for another (20) twenty years in order to slowly withdraw from the work of the laboratory; a total of (40) forty years in order to perform the entire work. However, when the alchemist spills the Cup of Hermes, the fire of the furnace of his laboratory is extinguished and the entire work is lost.

Now continue with the powerful mantras:

Kawlakaw is the Inner God. Sawlasaw is the terrestrial man and Zeesar is the Astral Body. These powerful mantras develop all of the internal powers. We have already mentioned the mantra INRI and its modifications. The alchemist must not forget any of these mantras. 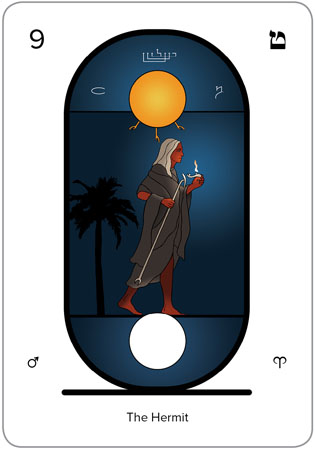 The Ninth Arcanum of the Tarot is the prudent and wise hermit who is covered with the protective robe of Apollonius which symbolizes prudence; he holds onto the staff of the Patriarchs and illuminates himself with the lamp of Hermes (wisdom). The alchemist must always perform the will of the Father; he must be humble in order to attain wisdom and after having attained it he must be even more humble, more than anyone else. It is better to be silent and die. While the sinning Adam is dying, the Adam-Christ is sequentially being born.