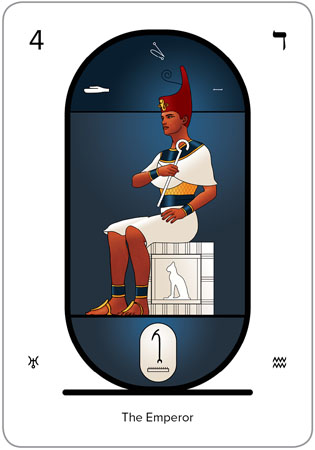 AUM. The Arcanum Four of the Tarot is the holy and mysterious Tetragrammaton, the sacred name of the Eternal One that has four letters: יהוה [Iod, Hei, Vav, Hei].

Remember, beloved disciple, that the four elements of Alchemy are: Salt, Mercury, Sulfur, and Azoth: the Salt is the matter; the Mercury is the Ens Seminis, the Azoth is the mysterious ray of Kundalini .

The Mercury of Secret Philosophy must be fecundated by Sulfur (Fire) so that the Salt can become regenerated. Only like this can we write the book of Azoth, write it upon a reed if what you want is initiation. The clue of our liberation is found in the lingam-yoni.

The four sacred animals of Alchemy are: the Lion that hides the enigma of Fire; the Man the represent the Mercury of Secret Philosophy; the Eagle that corresponds to the Air; the Bull that symbolizes the Earth. Egypt’s sphinx (as well as Ezekiel’s sphinx) has the sacred symbolism of the four creatures of alchemy.

The water contained in the lakes, rivers and oceans when heated by the fire of the sun are transformed into clouds that ascend up to the sky, and after a period of digestion are converted into lightning and thunder. This same process is repeated in the sexual laboratory of the alchemist. Our motto is Thelema (willpower).

The entrance into the old, archaic temples was commonly a hidden hole in some mysterious spot in the dense jungle. We departed from Eden through the door of sex, and only through that door can we return to Eden. Eden is sex. It is the narrow, straight, and difficult door that leads us into the light.

In the solitude of these mysterious sanctuaries, the neophytes were submitted to the four initiatic ordeals. The ordeals of fire, air, water, and earth always defined the diverse purifications of the neophytes.

Commonly, these sanctuaries of mysteries were found located at the foot of some volcano. There the disciples would fall to the ground and lose consciousness; in those moments the hierophant would take the students out of their physical bodies (thus, they would already be in the Astral Plane) and into the profundities of the sanctuary. Then he would teach them the grandiose mysteries of life and death. The volcanic emanations of the earth produced that apparent state of death. Some disciples fall in that apparent state of death within the Gnostic Lumisials. The ceremony of carrying the cross (as was practiced in the Gnostic Lumisials), serves in order to humbly confirm some internal, esoteric initiation.

Each one of the seven bodies of the human being must be crucified and stigmatized. All students of Kabbalah must be familiar with all of the elementals of Fire, Air, Water, and Earth. The present “human being” is still not a king or queen of Nature, but all are called to be kings or queens and priests and priestesses according to the Order of Melchizedeck.

It is necessary for the student to become familiar with all the elemental creatures of the four elements. Salamanders live in fire; Undines and Nereids live in water; Sylphs live in the air and Gnomes live in the earth.

Every Hierophant of Nature is converted into a King of the Elementals. If you want to be admitted into the Elemental Paradises of Nature, then respect all life, do not kill any animal species, do not drink wine that contains alcohol; love vegetables, do not ever destroy a plant or a flower. You only need two things in life: wisdom and love. This is how you will attain happiness, peace, and abundance.

Be ye therefore perfect, even as your Father which is in heaven is perfect. - Matthew 5:48

Every initiate must work with the elementals in the central mountain range. That mountain range is the spinal medulla. The Prima Matter of the Great Work of the Father is the Ens Seminis. You know this.

The sacred receptacle is in your creative organs, the furnace is the Muladhara chakra, the chimney is the medullar canal, and the distiller is the brain. When we work in the laboratory of the Third Logos we must transmute the lead of our personality into the gold of the Spirit. The Magnus Work cannot be performed without the cooperation of the elementals.

The Gnomes and Pygmies are the great alchemists that transmute the lead into gold; they reduce the metals to its semen (seed) in order to transmute them into the pure gold of the spirit; their labor would be impossible if the Undines did not obey or if the Salamanders of fire would not make the voluptuous Undines fertile, because without the fire, the tempting Undines can only take us to a shipwreck. Ulysses (the cunning warrior destroyer of citadels) was himself bound to the mast of the ship so that he would not fall seduced by the sexual beauty of the Undines. Ancient Gnostics stated: “All of you will become Gods if you leave Egypt and pass through the Red Sea (the ocean of temptations).”

The vapors of the prima matter of the Great Work would not ascend through the chimney without the help of the disquieting Sylphs. The Gnomes need to distil the gold in the brain and this is only possible with the help of the aerial Sylphs. The Gnomes transmute the lead into gold. The Magnus Opus would be impossible without the elementals. We need to become familiar with the elementals of Nature.

Fire: light a fire then vocalize the mantra INRI. This mantra is vocalized in two separate syllables: IN – RI:

Prolong the sound of each letter.

Thereafter, concentrate on the fire that you have lit (on the candle, on the oil lamp, or on the charcoal) and profoundly meditate on the fire. Invoke me, Samael, your friend, who wrote this lecture, I will assist you in this practice. Then vocalize the “S” as an affable and fine whistle, like the buzzing of a rattlesnake.

Practice with the Sylphs

Air: seated on a comfortable chair or laying down (face up) with the body relaxed, you will profoundly meditate on the following plagiary:

Blow towards the four cardinal points of the Earth. Pronounce the letter H many times as if imitating a very deep sigh. Then slumber while meditating on the Genii Michael and Sabtabiel. This way you will become in contact with the Sylphs.

Practice with the Undines

Water: before a cup of water, get into the state of slumber while meditating on the following exorcism:

Thereafter, while still in a state of slumber, vocalize the letter M as follows: Mmmmmmmm, with your lips hermetically sealed. This sound is like the bellow of the bull, yet it is a prolonged sustained sound that does not decrease like the bull does. The letter “M” is the mantra of the waters. This is how you will be in contact with the creatures of the waters. Thereafter, invoke the genie of the waters; the genie’s name is Nicksa.

Practice with the Gnomes

When profound meditation is intelligently combined with the state of slumber, it allows you to enter into the elemental paradises of Nature.

Every alchemist needs to work with the Elementals of Nature.

The hieroglyphic of the Fourth Arcanum of the Tarot is the Emperor; the sovereign appears forming a marvelous triangle with his body. When the legs of the Emperor are crossed, they form a cross; this is the image of the athanor of alchemists; the joint of the cross with a triangle is only possible by means of the potable gold (sacred fire) of alchemy.

The Innermost puts the cross of initiation with the Arcanum Four of the Tarot over his shoulder.

The main kingdom of the Gnomes resides in the North; the one of the Salamanders in the South, the one of the Sylphs in the East and the one of the Undines in the West. These four elemental hierarchies form a cross. Behold here, the holy and mysterious Tetragrammaton.