Beloved brothers and sisters of my soul : we are now going to study the Sixth Arcanum of the Tarot.

Beloved, remember that indeed without any doubt, the two interlaced triangles of the Seal of Solomon [✡], which join or separate love, are the two shuttles with which the ineffable mystery of eternal life in the loom of God is woven or unwoven. The upper triangle symbolizes Kether (the Father who is in secret), Chokmah (the Son), and Binah (the Holy Spirit of each human being). The lower triangle represents the three traitors of Hiram Abiff; those three traitors are inside of us. The first traitor is the Demon of Desire; that traitor lives within the Astral Body. The second traitor is the Demon of the Mind; that traitor lives within the Mental Body. The third traitor is the Demon of Evil Will; that traitor lives within the Body of Willpower (Causal Body). The Bible cites these three traitors in the Apocalypse of Saint John in Revelation 16:13, 14: 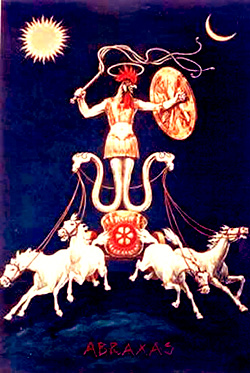 The clue is found in the serpent. In the Abraxas, the rooster’s legs are made by the double tail of a serpent. The tempting serpent of Eden exists as well as Moses’ serpent of brass (nachash) interlaced around the tau, in other words, entwined around the sexual lingam (the phallus); the yoni is the uterus. Normally, the serpent is enclosed within the chakra Muladhara (Church of Ephesus). The serpent slumbers in that coccygeal center entwined three and a half times. The serpent must inevitably leave from its church. If the serpent rises through the medullar canal we convert ourselves into angels and if the serpent descends we convert ourselves into demons. Now you can comprehend why there are always two serpents around the Caduceus of Mercury. The sexual force is the Hyle of the Gnostics.

When the students spill the Cup of Hermes during their practices with the Arcanum A.Z.F. they commit the crime of the Nicholaitans, which used a system in order to make the serpent descend. This is how the human being is converted into a demon.

The complete and positive development of the serpent is only achieved by working with the Philosophical Stone within the sexual laboratory of the practical alchemist.

The superior triangle is the center of the alchemist’s Microcosmos and the alchemist’s Macrocosmos. The sign of the Mercury of the Secret Philosophy (the Ens Seminis) cannot be missed in the center of the triangle. Man and woman must work with the Sun and with the Moon, with the Gold and with the Silver (sexual symbols) in order to perform the Great Work. Nevertheless, this work is very difficult because the male goat of Mendes (the Black Dragon) always tries to make the alchemist sexually fall. It is urgent to work with the four elements of alchemy in order to perform the Great Work.

It is precisely in the Microcosmos, represented by the inferior triangle, where the entire work of alchemical laboratory must be performed by us. 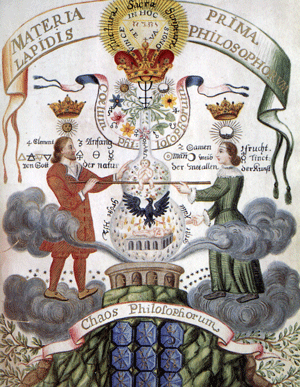 The marvelous microcosmic and macrocosmic alchemical illustration above (from Chimica Basilica Philosophica) represents the man and the woman working with the Sun (the symbol of the phallus) and with the Moon (the symbol of the uterus). In this medieval painting, two men together or two women together do not appear because such a crime against Nature only creates a filthy vampire. The tenebrous ones justify their crimes against Nature, thus, the Law punishes them by separating them from their superior triangle forever. This is how they roll into the abyss.

The mysteries of lingam-yoni are terribly divine and cannot be altered. The lingam can only be united with the yoni; this is the law of Holy Alchemy. The Alchemical Weddings signify, as a fact, a Perfect Matrimony. The alchemist must not only kill desire, but moreover, he has to kill the very shadow of the horrible tree of desire.

Sacred dances between men and women were performed in the mysteries of Eleusis along with love and the music of the centers in order to enchant the Serpent. Then, the dancers of the temple were clean from the filthy venom of desire. All kind of sins are forgiven, except the sins against the Holy Spirit. “Flee fornication. Every sin that a man does is without the body; but he that commits fornication sin against his own body.” [1 Corinthians 6:18] However, fornication does not pertain only to the physical body; it is also related to thoughts, emotions, words and animal sensations.

In the mysteries of Eleusis, the couples danced in order to mutually magnetize themselves; then while dancing, the couple (man and woman) together attained ecstasy. The bio-electromagnetic interchange between man and woman cannot be replaced by anything; this is a gigantic, grandiose and terribly divine power. God shines upon the perfect couple.

If you want in-depth realization of your Self, remember this alchemical aphorism: “Nature must be imitated in everything. Nature enjoys Nature; Nature dominates Nature.”

The task of the alchemist is to search for the occult and ancient knowledge and to perform the Great Work in his sexual laboratory. The Great Work is difficult, it signifies many years of experiments, terrible sacrifices and tremendous difficulties. There exists a transmutator agent (the Philosophical Stone), a heavenly influence (cosmic religiosity), diverse astral influences (esoteric astrology), influence of letters, numbers, correspondences, sympathies (Kabbalah) .

The sacred principles of Alchemy are:

When the student enters into the Temple of the Sphinx he studies the great book of Nature, where all of the Cosmic Laws are written.

Indeed, very few are the ones who can open the book and study it. The “ordeal of the sanctuary” is very terrible. Very few are the human beings who have succeeded in passing such an ordeal. A precious jewel (with the Seal of Solomon), a ring filled with ineffable light is granted to the one who victoriously passes the ordeal of the sanctuary. The neophyte who touches the ring with the left hand loses it inevitably.

Another explanation of the Seal of Solomon is the following: above: the Father, the Son and the Holy Spirit; below: the power that governs (the Innermost), the power that deliberates (the mind), and the power that executes (the personality).

When the power that deliberates and the power that executes rebel or are subordinate against the governor (the Innermost) then the outcome is failure.

Great Masters used to dictate messages through the lips of their Bodhisattvas. People do not understand this and mistake the mediators with the detrimental mediums of Spiritism because people allow themselves to be carried away by false appearances.

The entire positive and negative forces of the universal magnetism are found represented in the Seal of Solomon.

In the works of high magic, it is necessary to trace a circle around us. Such a circle must be totally closed, interrupted by the Seal of Solomon.

With the seven metals, Gnostic brothers and sisters can manufacture medallions and rings with the Seal of Solomon. The Seal of Solomon must be utilized in all of the works of invocations, and in the practices with elementals (as we have already taught in Arcanum Four of this series of lectures on Kabbalah) .

The elementals of nature tremble before the Seal of the Living God. The Angel of the Sixth Seal of the Apocalypse has reincarnated at this time within a feminine body (this angel is a specialist in the sacred Jinn science).

Arcanum 6 is the Lover of the Tarot. It is the soul between vice and virtue. The Arcanum Six is enchainment, equilibrium, amorous union between man and woman, terrible struggles between love and desire, the mysteries of lingam-yoni, connection. The struggle between the two ternaries is found in the Sixth Arcanum of the Tarot. The Sixth Arcanum is the supreme affirmation of the internal Christ, and the supreme negation of Satan.