Beloved disciples, let us now study the Fourteenth Arcanum of the Tarot.

It is convenient to state that the profound wisdom of this Arcanum is classically divided into three parts:

Let us study each of these separately.

In the Fourteenth Arcanum, there appears an angel with the sun on his forehead. If we observe the angel will see that he has the square and the triangle of Gnostic esotericism on his vesture. The Angel has a cup in each hand and mixes the substances of both cups together. One cup has the white elixir and the other the red elixir. The Elixir of Long Life is the outcome of the intelligent mixture of these two substances. 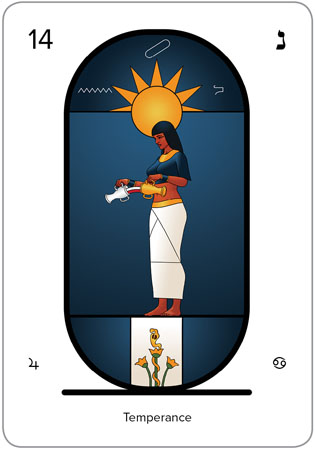 When the septenary man is sexually united with the septenary woman, the sum is the Fourteenth Arcanum of the Tarot. Moreover, it is important to state that both the man and the woman have seven principles and that the most important and the fastest center of the human being is the sexual center.

The process of creating a new being (the true human being) is performed within the laws of the musical octaves. The seven notes of the musical scale are the foundation of all creation. If we transmute the creative energy, we initiate a new octave in the Ethereal World, whose outcome is the birth of To-Soma-Psuchikon (the wedding garment of the soul ). We can consciously penetrate all of the departments of the Kingdom with this vehicle.

A third octave will permit us to engender the true Astral Body, the Astral Christ (the Christic Astral Body). When reaching these heights, the old astral, the phantom, is left reduced to an empty shell, which, little by little, will be disintegrated.

A fourth octave permits us to engender the Christ Mind. This vehicle gives us true wisdom and unity of thought. Only the one who engenders the Christ Mind has the right to say, “I have a Mental Body.” The present Mental Body is only a phantom-like-shaped body. This phantom-like-shaped mind really converts itself into an empty shell when the true Mind is born. Then, the old mental carcass is disintegrated and reduced to cosmic dust.

Work with the Prostatic/Uterine Chakra

Immediately after finishing the daily work with the Arcanum A.Z.F., the Alchemist should lie down in the dorsal decubitus position (facing up); he/she must work with his/her prostatic/uterine chakra. This is a very important chakra in high magic.

The Alchemist must inhale the vital air, then retain the breath and in those moments direct the nervous currents towards the prostate/uterus with the intention of closing the sphincters that exits between the seminal vessels and the urethra.

The effort of sending the electro-magnetic currents must be similar to the supreme effort that a woman does when giving birth. The woman moans in those moments, in other words, her larynx emits the moaning sound of the letter “M.” Krumm-Heller stated that initiation must start with the letter “M” and “S.” If we want to be born in the internal worlds, then we must also utter the sound of the letter “M” (as when one moans). It is about being born and we must be born.

Thereafter we slowly exhale, we wait for the breath to naturally return to us and we inhale, we mentally pump the creative energy and make it rise through the two canals Ida and Pingala to the chalice (the brain). We continue repeating the exercise.

After a certain time of practice, students must learn how to direct their creative energy from their brain to their heart; the Fourteenth Arcanum is the Arcanum of Temperance.

In the Jinn State, a body can shapeshift easily. Circe shapeshifted men into pigs; legend states that Apuleius shapeshifted himself into an ass. To manage shapeshifting the following Latin mantras are used: “Est Sit, Esto, Fiat.” Only while in a Jinn State can we adopt any type of shapeshifting.

The devotee must sit at a table and cross his arms, placing them on the table; while resting his head on his arms, he must willingly fall asleep. The student must relax his mind by emptying it from any type of thoughts until it is blank. Thereafter, imagine the slumber state (that precedes the dreaming state); identify with it and fall asleep. When the student feels that he is slumbering, he should get up from his chair (but keep the slumber state as if he was a somnambulist) and attempt a long jump, as far as possible, with the intention of submerging himself within hyperspace (with his physical body). Thereafter with a pencil, he must mark the exact spot on the floor where his foot landed.

As the student practices this exercise, he will notice that each time the length of the jump is longer and longer. Finally, the day will arrive in which he will perform a jump that is beyond average. This will give the student joy because it will indicate that his physical body is now penetrating into hyperspace. Finally, constancy, patience, willpower and tenacity will grant triumph to the student; thus, on any given day the student will definitively sustain himself with his physical body in hyperspace. With his physical body he will penetrate into the internal worlds; he will be in “Jinn State.” Then within a few moments, he will be able to transport himself to any place on earth. He will become an investigator of the superior worlds.

Before initiating the former Jinn practice, the student must invoke the Genii of Jinn Science. The devotee will invoke the Master Oguara many times, as follows:

This invocation must be repeated thousands of times before falling asleep.

The Last Supper of the adorable Savior of the world comes from archaic epochs. The great Lord of Atlantis also practiced this ceremony, as Jesus Christ did.

This is a blood ceremony, a blood pact. Each one of the Apostles put their blood into a cup and then they mixed their blood with the royal blood of the Adorable One within the chalice of the Last Supper (the Holy Grail). Thus, this is how the astral bodies of the Apostles joined the Astral Body of Christ, by means of this blood pact. The Apostles drank the blood contained within the chalice and Jesus likewise drank from it.

The Holy Gnostic Unction is united to the Last Supper through this blood pact. When the Christic atoms (Solar Astral Atoms) descend into the bread and the wine, they are in fact converted into the flesh and blood of (the Cosmic) Christ. This is the mystery of the transubstantiation.