We have arrived at the Ninth Arcanum, the Hermit of the Tarot, the Sephirah Yesod. This Sephirah is the Ethereal World, the Eden of the Bible. That Sephirah is governed by the Moon. The rector of Eden is our Lord Jehovah. It is very interesting to know that Eden is governed by the positive rays of the Moon, while the Abyss obeys the orders of the negative rays from this satellite.

It is intriguing to know that the Moon has two esoteric faces: Eden and the Abyss. The Bible states that God placed at the east of the Garden of Eden two Cherubim and a flaming sword which menacing turned every way, to keep the way of the Tree of Life. On the other hand, it is also very true that the Abyss has its tenebrous guardians.

When an inhabitant of Eden ejaculates the seminal fluid, then the sexual fire or Pentecostal fire that is named Kundalini among the Orientals descends through the medullar canal and becomes enclosed within the church of Ephesus or chakra of the coccyx. Therefore, the outcome of seminal ejaculation is death for the Edenic Man. As a fact, this is how the man enters into the Abyss, the infra-atomic regions of the Lucifers.

Eden is the depository of all the sexual forces of Nature. The Elohim, who govern the lunar forces related with the reproduction of all the living species, live in Eden.

When a woman dies while in parturition of her child, she loses an opportunity as a reincarnating soul ; nonetheless, this is a deceptive failure, since indeed she has performed a totally complete occult work. This can be proven by the mystics, the great illuminati, during the ecstasy. 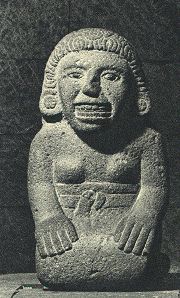 The sculpture of Cihuapipiltin, Goddess of the west and of women who died while in parturition of their child, is in the National Museum of Mexico. This Goddess is indeed a great Master of the White Lodge who lives in the Ethereal Plane (Eden). That Master works upon those wretched women who died while in parturition. The death of women in parturition is, in the superior worlds and in accordance with the laws of karma (even when this appears incredible), a perfect work. In the internal worlds, the fruit of this grief is remarkable. The disincarnated soul who died during parturition appears before the clairvoyant with her child in her arms. The law of karma determines that type of death for the good of the souls who need it. The law is the law, and the law is fulfilled.

Religious people know that a Virgin named “Immaculate Conception” exists. Any mystic-illuminati perfectly knows that she lives in Eden working with the immaculate conceptions of the Holy Spirit. When a conception without the spilling of the seminal fluid is performed, it is done by the Holy Spirit. Such a conception is under the vigilance and direction of the “Immaculate Conception.” We announce that this said Virgin is not the Hebrew Mary. Indeed, the “Immaculate Conception” is a woman who attained the degree of Virgin. Many similar women exist, true living Buddhas who attained the Fifth Initiation. Let us remember the Virgin of the Sea (Mother of Jesus), and the eleven thousand Inca Virgins, the Virgins of the stars, the Virgin of the law, etc. All of those women are living Buddhas, women who attained the Fifth Initiation of Major Mysteries (true human beings). The most elevated degree for a woman is that of Virgin.

The most elevated degree for a human is that of Christ. The Virgin who renounces Nirvana and reincarnates in order to work for humanity as a human being elevates herself to the degree of Christ.

The Sephirah Yesod is the Philosophical Stone of the Alchemists, the Cubic Stone of Yesod, the mysterious stone Amphorasep of the Hebrews, the sex. Yesod is in the sexual organs.

And I say also unto thee, That thou art Peter, and upon this rock I will build my church; and the gates of hell shall not prevail against it.

No one can incarnate the intimate Christ without previously having built the temple upon the living rock (sex).

The seven degrees of power of the fire are developed only with sexual magic.

The mysteries of sex enclose the clue of all powers. Everything that comes into life is a child of sex.

Among the Aztecs, the dance of the twelve Cihuateteos for the dead women during parturition was verified around the red Quetzalcoatl and the black Quetzalcoatl.

So, Cihuapipiltin is the Master helper of those wretched parturient women. Women, when you need Cihuapipiltin, invoke her! Thus, you will receive immediate help. 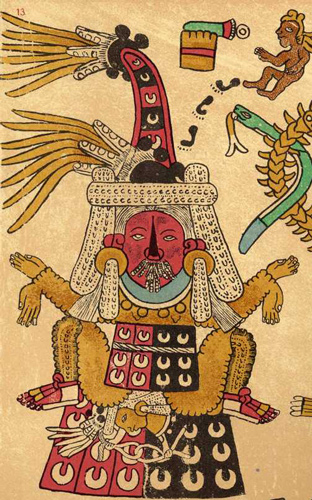 Another Goddess of parturition named Tlazolteotl exists among the Aztec Angelology. These Goddesses and Gods are pure and perfect Angels of Christ.

Tlazolteotl, Goddess of parturition, is a great Master of the White Lodge, who when seen clairvoyantly seems a beautiful adolescent filled with life. The Master Tlazolteotl always wears a beautiful blue mantle and her countenance is as resplendent as the rosy color of the dawn. Tlazolteotl is the chief of a group of Angels who intensely work helping women during parturition.

In Eden, the mountains are blue and transparent as the crystal. The sublime beauty of Eden has the same divine, blue color.

Whosoever wants to enter into Eden has to have previously received the Wedding Garment of the Soul ; this garment receives the name of “Soma Psuchikon.” Such a garment is an organized body of ethereal material. When the clairvoyant examines this ethereal organism, he can then prove that it is transparent as crystal. It looks like a beautiful, innocent girl.

It is necessary to know that the “Soma Psuchikon” is governed by the Moon. Whosoever possesses this body can visit all the departments of the kingdom with it.

We departed from Eden through the doors of sex; therefore, only through that straight, narrow, and difficult door can we return into Eden. Eden is sex itself.

Perfumes and sandals are the symbols of Yesod. We must study the two trees of Eden: the Tree of the Science of Good and Evil, and the Tree of Life (the ten Sephiroth). Both trees even share their roots.

Those who have ill sexual organs must invoke Tlazolteotl to receive help. They can also invoke with their heart and mind the Angel Cihuapipiltin.

It is necessary to explain that during the practice of sexual magic the three elements of pure Akasha, which descend through the Brahmanic cord, remain completely strengthened by our willpower. When this occurs, these three breaths are converted into a tremendously violent and explosive force that can convert us into living angels or living demons.

If during the practices of sexual magic the magician commits the mistake of spilling the semen (reaching the orgasm) , then he loses millions of solar atoms, which are replaced by million of satanic atoms.

The satanic atoms are gathered after the coitus by the peristaltic movements of the sexual organs. Such malignant atoms infect the Brahmanic cord; afterwards, these atoms intend to rise towards the brain, but the three breaths of pure Akasha, strengthened by the force of willpower, hold the ascension of such atoms and cast them downwardly with violence, towards the atomic infernos of the human being. When this happens, the tenebrous atoms crash violently against the king of the malignant atoms; such an atom abides in the coccyx. Such an atom is indeed a very dangerous black god. Normally, this god abides in the coccyx always waiting for an opportunity to pilfer the fire of Kundalini and direct it downwardly. Therefore, with the seminal discharge during sexual magic, this atomic king from darkness receives his awaited opportunity and, filled with a great force, awakens the igneous serpent of our magical powers and directs it downward. This is how the tail of Satan (the Kundabuffer) is formed in the demons. When this occurs, horns protrude upon the forehead of the Astral Body. Whosoever descends in this way, whosoever reaches such a degree of degeneration, loses his divine Spirit and sinks himself into the Abyss. Those are the lost ones, the soulless ones; those are the ones who pass through the Second Death. They slowly disintegrate within the Abyss until becoming cosmic dust.

A multitude of schools of black magic exist; some of them have very venerable traditions that teach sexual magic with seminal discharge. They have very beautiful theories that attract and captivate; therefore, if the student falls into that seductive and delectable snare, he then converts himself into a black magician. Those black schools affirm to the four winds that they are white; this is how the naivé fall. Moreover, those schools speak beautifully about love, charity, wisdom, etc., etc., etc. Naturally, in such circumstances, the naivé disciple believes with firmness that such institutions have nothing to do with evil and perversity. Remember, good disciple, that the Abyss is filled with sincere but mistaken people, and people with very good intentions.

The Brahmanic cord is the central medullar canal with the two apocalyptic witnesses; these are two semi-ethereal, semi-physical cords that connect the sexual organs with the brain. The solar and lunar atoms arise towards the brain through these two cords.

Terrible temptations exist and also millions of seemingly white schools, which are indeed black, that are filled with wolves who wear sheep skins and who teach their students systems of sexual magic with seminal discharge. So, those schools only speak of sublime things; therefore, this is how the student, seduced by this golden snare, falls into the abyss of perdition.

The maximum ordeal of the Ninth Sphere seduces and is very long-lasting; this ordeal endures until the student attains the total realization of the Self. All depends on the effort of the student. Whosoever enters into the Ninth Sphere and is firm until the death is converted into a living Christ. However, in life it is unusual to find somebody who comes victorious from the Ninth Sphere. Many are those who start, and it is rare to find someone who achieves it.