The Secret Teaching of the Nahuas

If thou wilt diligently hearken to the voice of Jehovah thy God, and wilt do that which is right in his sight, and wilt give ear to his commandments, and keep all his statutes, I will put none of these diseases upon thee, which I have brought upon the Egyptians: for I am Jehovah that healeth thee. - Exodus 15:26

“The origin of all human sufferings has to be searched for within sin.” This is what the Tlamatinime taught. The righteous one is invulnerable to evil.

Hallucinogenic mushrooms grow in the cool climate of the mountainous Huautla in Jimenez, Oaxaca, Mexico, where it rains throughout the year. The Nahuas utilized hallucinogenic mushrooms to discover the origin of sicknesses. The dose should not exceed four mushrooms. Under the effects of these mushrooms, the sick person experienced the “slumber of the temple.” During this state, his subjective mind retreated; thus his subconscious mind was ready for the catharsis. Then, the Master interrogated the sick person by asking him questions in retrospection: “What are you doing in these moments? What did you do yesterday? What did you do the past week? What did you do a year ago?” Thus gradually, the sick person revealed his interior conflicts, his more intimate anguishes; without omitting a single detail, he confessed his unspeakable deeds. Therefore, with the confession of those events which disturbed him internally, the committed sin, the true cause of his sickness, was uttered through his lips.

Many times when a sin was not the origin of the illness, the Master then administered his command followed by the ineffable word that he pronounced so quietly that it seemed a whisper. Yet, if the illness was related with a sin, then the Master imposed onto the sick person that he must humbly demand for the healing of his illness, the forgiveness from his victim, plus praying and service to his fellowmen.

The effect of the hallucinatory mushrooms endured some six to seven hours. Upon awakening, the sick person did not remember anything; yet, he awakened with euphoria, stimulated by the beauty that he experienced in the superior worlds after his confession. His convalescence was gradual, and during it, he had to keep complete chastity. By any motive, his nourishment’s regimen had to alternate with sweets that were the gifts of friends and family.

In chapter four, we stated that the peyote (Williamensi Lophophora) causes the separation of the Astral Body from the physical body and also prevents the neophyte from losing the lucidity of his consciousness while in the superior worlds. The peyote is a small, wild, thornless cactus-plant that protrudes about two centimeters from the earth; it is ash-colored and it is divided into segments covered with white and bright down; its center sprouts little light-red flowers, its root is thick and obscure. It grows in Queretaro, San Luis Potosi, Sonora, Zacatecas, Nayarit, and Coahuila.

The Tlamatinime employed the peyote in their temples to initiate their neophytes. In the same way that strips of fruit are dried, likewise, they sliced such a plant and dried it in the shade. The candidate of the ordeal, previously prepared through praying, fasting, and the absence of worldly thoughts, was comfortably seated in the temple where he remained with his eyes closed. Two strips of peyote, mixed and slowly swallowed by him, were enough so that after five minutes his senses would start to sharpen and thus he could see multicolored lights.

His physical body acquired heaviness, and little by little, he abandoned his body, to soar towards a great light that exerted a pull on him, along with a great indescribable happiness which invaded the whole of his being. Afterwards, he experienced a great adventure, such as the one which the Apostle Paul reveals in 2 Corinthians 12:1-4:

On many occasions, the neophyte remained unconscious for seventy-two hours, since, apart from his time for his initiation, he had to bring to his Masters the answer of any message that they had entrusted onto him for the invisible hierarchy.

Nevertheless, by no means should you believe that the hallucinogenic mushrooms are indispensable to provoke “the slumber of the temple,” and the peyote for “initiation,” because as the serpent of the Aztecs, impelled by the amorous magic, arises to the brain, the magnetic force of the initiate is proportionally converted into cosmic force. Then, with only with the sight or with the inflections of the voice, the “slumber of the temple” is provoked, and with the imposition of hands the treatment of any type of sickness; at this point, the path bifurcates: the initiate has to choose between being a magician or shaman. His only purpose is to surrender himself to God, and as the initiate progresses, the amorous magic becomes unnecessary.

If you observe the illustration of this chapter, you will see nine women, who, while seated in the Oriental style and embracing each other by placing their hands over the kidneys of their female friends, form a half-moon chain. In front of the women, three men are found seated in the Oriental style (legs crossed); they are in the center forming a triangle, and each one holds a reed with in his dexterous hand (Jeremiah 17:10). 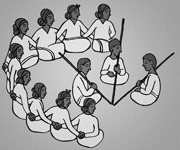 This is a magical, amorous chain without contact. The nine women attract lunar forces towards the kidneys of the three men, and the three men attract solar forces towards the kidneys of the nine women. In order to intensify the forces, a bonfire with ahuehuete wood has to be lit at the right of this human chain, and at the left of this human chain, within a little puddle filled with fresh and clean water, must be placed nine living frogs. These frogs must not be hurt when captured.

Everything that is done in the Astral Plane manifests itself in the physical plane. This magical ceremony makes the serpent of the Aztecs to be agitated in the spinal medulla of the adepts; thus, these ones have to chant the mantras:

In order to chant these mantras, they must be seperated into syllables, and each one of them must be chanted three times. Their intonation is the natural “FA” which resounds in all of nature. When the executors of this magical ritual, charged with solar and lunar forces, go out of the temple, they can cure any type of sickness by uttering the ineffable word or by the imposition of hands; thus, this is how they can perform many of the so-called miracles.

The aficionados of occultism who have not had the opportunity to initiate themselves within a serious order believe that an initiate is one who starts studying some art, profession, or career.

To become an initiate, one has to endure a magical ritual in which the soul is momentarily liberated from the four bodies of sin and ascends towards the superior vertex of the triangle of life, from where the soul can contemplate, on one side, his physical-animal life, and on the other side, his spiritual life. From that moment, the initiate lives with a secret longing within his heart: to accomplish a mission of service towards all fellowmen. From that moment, he knows that he is not an animal being, but the Innermost incarnated within a body, and that God and the Masters are with him in all the crucial moments of his terrestrial life.

He knows that his mission is to love and to sacrifice himself for his fellowmen. He know the secrets of life and death, and that this is neither his first nor his last incarnation, and that sometimes in his dreams, his “I” appears in his past lives, where he is found as an Egyptian leader with the face of a sphinx and a golden mitre, and living within the Levitical Memphis.

Hang from the wall above the table of your sanctum sanctorum a mirror of about 30 by 40 cm., or about 30 cm. of diameter if it is round, so that you can see yourself while seated. If you did not perform the practice of the ritual to which we refer in chapter sixteen, then proceed to perform it, choosing for that purpose the night of any Thursday, between 10:00 and 11:00 p.m. Start the convocation of that night by praying to God and to the Masters, followed by the 23rd Psalm of the Bible (which you must not be missing in your sanctum).