The jaguar or American tiger is specially worshipped amongst the numerous indigenous tribes who populate those dense jungles from the Colombian, Venezuelan, Brazilian, and Ecuadorian Amazonian region. The Huitores, Miranas, Muinames, Huahibos, etc., consider the tiger to be a sacred and untouchable animal, to the point that if one of these natives comes across one of these felines (in spite of being armed with bow and arrows, and on many occasions armed even with fiery weapons), they prefer to restrain their dogs and turn back, ignoring all of their affairs, before attempting anything against the jaguar. None of them would ever dare kill a jaguar or American tiger.

Every tribe from the Amazonian jungles is governed by two authorities: the administrative, represented by the chief of the tribe, and the spiritual that is incarnated by the Piachi (sorcerer in English), who we call priests. The natives from the Amazonian jungles do not kill the tiger because they know that the tiger is the incarnation of one of the Piachi of their tribe; in other words, the Piachi of their tribe can transform himself into a tiger and wander around within the jungles.

Ocelotl-Tonatiuh, sun of tigers, one of the twenty founders of Tenochtitlan, was the chief of the mystical tigers and priest-warrior of the Order of the Tiger Knights. These adepts passed through terrible ordeals before learning how to control their imagination and willpower to the point of being capable of transforming themselves into tigers.

By taking advantage of the state between vigil and dreaming, they transformed themselves into tigers. When their bodies had taken on the feline shape, filled with faith and confidence in themselves, they got up from their beds and chanted the following ritualistic formula, “We belong to each other.” This phrase refers to the Harpocratic forces that we talked about in the previous chapter. It also refers to themselves and to the mental forces of the tiger that allow them to sustain themselves within the fourth dimension with their physical bodies transformed into tigers. Do not forget that the human body while inside the internal worlds is elastic, ductile, and malleable.

In the Aztec Calendar that exists in the Museum of Anthropology and History in Mexico City, we see that on each side of the face of Tonatiuh, there are two human hearts between the feline paws of that solar deity; two xiuhcoatl, serpents of fire, are falling down, head first, and their jaws touch where they meet at the bottom center. Tonatiuh points his flinted tongue at them, symbol of fire, symbol of wisdom. 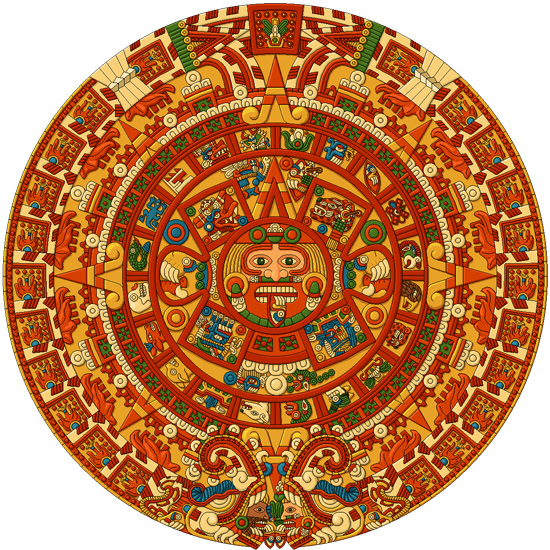 Between the jaws of the xiuhcoatl appear the faces of two personages: the one on the right is wearing the same crown, the same nose ring and the same earrings as Tonatiuh. He is united to the personage on the left by his flinted tongue; the one on the left is wearing a blubbery-lip and a net that covers his face up to his cheek bones. This latter personage is Quetzalcoatl, and also the precious feathered (quetzalli) serpent in its double human manifestation: the fallen ones, Adam and Eve, fallen because of their transgression of the law of God: Thou shalt not fornicate.

The flinted tongues (symbol of light, symbol of wisdom and consciousness) that unite the two personages, symbolize that they are one in themselves. They are the eternal pairs of nature. They are the feathered serpent which, refulgent as the lightning, abides dormant, coiled within the human gland of the coccyx. This sacred fire is invisible to the official science. When this sacred fire is awakened, it hisses and strengthens (as when a serpent is hit with a stick) in order to ascend through the length of the medullar canal, where the seat of the seven main psychic centers (chakras) of the human being are found. When these psychic centers are crossed by this serpentine fire, they are vivified; thus, their fiery corollas (which before were found fallen and withered) turn upward.

Tonatiuh, the Father, Quetzalcoatl, the fallen fire of the Holy Spirit, lingers; it wants to be raised up by the child of the Aztec race.

The hearts between his feline paws symbolize “the death of the initiate.” When Quetzalcoatl rises and transforms into a tiger, he tears apart the heart of the one who awakens him, until he kills within him all of the illusions of his personality and all of the attachments to those things that tied him to the Earth. Indeed, the sagacity and fury of the tiger are necessary in order to kill the human personality, so that the seven serpents of the Dragon of Wisdom (symbol of the beheaded one) become resplendent.

Nine Initiations of Minor Mysteries and nine of Major Mysteries exist. There is no initiation without purification. In each initiation something dies within the human being (see The Book of the Dead). We must lose everything in order to gain everything.

The soul enters into the world of the Gods and is married with her Innermost when she liberates herself from the four bodies of sin.

The feline paws of Quetzalcoatl, our Innermost, holds the human heart as prey in order to liberate us from the four bodies of sin and take us to the ineffable joy of the union with God. The lance of Longinus wounds the human heart that painfully bleeds because of repentance. The most perfect sanctity is necessary for the human being to recuperate his lost inheritance.

While in this state of consciousness, fall asleep while thinking of your Innermost, your internal God, Quetzalcoatl. Worship Him, adore Him, and ask Him for His guidance and help. Afterwards, chant the syllable ON as follows: