A phallic monolith representing a beheaded man is found in the Museum of Anthropology and History in Mexico City. In place of his head, there are seven erected serpents with protruding bifid tongues (which represent light) coming out from their open mouths. This man’s phallus is erect; with one hand he points towards the rays of light that are emerging from within his own vertebral column. 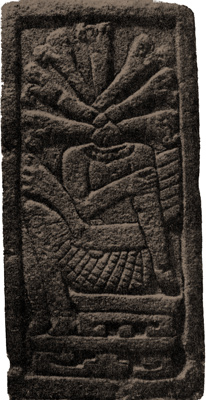 The sacred fire of Pentecost (the fire of the universe) appeared unto the twelve apostles as cloven tongues like as of fire, and it sat upon the head of each of them. - Acts 2: 1, 4

This Nahua phallic monolith with its seven serpents symbolizes Quetzalcoatl the victor. The seven serpents with bifid tongues is the sexual fire of the adept of the arcane sciences. The Yogis speak about the Kundalini , the igneous serpent of the magical, lightning powers.

The Nahuas worshipped Quetzalcoatl as a god of the winds; however, they also worshipped him as a precious feathered (quetzalli) septuple serpent (coatl) that is dormant (fallen into the atomic abysses) in both man and woman. However, Quetzalcoatl waits within their coccyx, to be awakened and lifted up by the perfect couple.

The seven serpents that replace the head of the beheaded one also symbolize the man who raises his seven serpents and converts himself into a dragon of seven truths. The erect phallus (shaped as a palm) shows us that the seven serpents are lifted up only by means of amorous magic. This is how man and woman can achieve victory in their life.

There is nothing greater than love. God shines upon the perfect couple.

The vertebral column has thirty-three (ring-like) vertebrae that are placed one on top of the other and form an osseous canal that contains and protects the spinal medulla. This is the tree of physical life that departs from the brain and descends past the second lumbar vertebra; it then extends from there as a bunch of nerves until it reaches the coccyx. The cervical region has seven vertebrae, the dorsal has nine, the lumbar has five, the sacra has five, and the coccygeal has four vertebrae.

The human being has seven bodies that co-penetrate one inside of the other without confusion. Each one of these bodies has its own spinal medulla. There is a serpent that corresponds to each one of them; seven serpents, two groups of three and in the midst of them is the sublime crown of the seventh serpent, that is the seventh tongue of fire that unites us with the Law, with our Innermost, with our Father.

The ascent of the seven precious feathered (quetzalli) serpents throughout each one of the thirty-three vertebrae of the dorsal spine (the thirty-three degrees of Masonry) is very slow and difficult and it is only possible by means of sexual magic. We must not allow ejaculation. We must transmute the semen that departs from the testicles in the man and from the ovaries in the woman into electromagnetic energy that rises through the different conducts of both in order to be united in their spinal medulla in their coccygeal gland. This energy ascends from its coccygeal base towards the brain and is converted into solar and lunar atoms.

The precious feathered (quetzalli) serpent is awakened, agitated, and raised when the semen is transmuted—by means of the alchemy of sexual, amorous contact—into electromagnetic energy, and makes contact in the coccygeal gland. Subsequently, the serpent is transformed into Quetzalcoatl, which gives us the power to unleash or harness the winds, to unleash or harness the tempests, to activate or deactivate the fire, and to appease or to make the earth tremble.

Lie down on your bed, and with all the muscles of your body relaxed, slumber while thinking that the fire of the Holy Spirit continues to descend from heaven (as in the former practice) and enters into your head through the pineal gland. Feel that such a fire inundates your brain and puts into motion from left to right (clockwise) the marvelous and bi-colored lotus flower of your pituitary chakra, the eye of the Prophet. The pituitary gland is situated in the mid-brow. See it fill with fire and spin upon itself. While in that state of consciousness, vocalize the syllable IN, as follows:

Feel as if you are floating on an ocean of fire. This exercise must last for about thirty minutes and must be performed before going to sleep; if possible perform it at the same time everyday, while lying down on your bed.

The next day, write down everything that you dreamed about in a notebook, without telling your impressions to anybody and without commenting about this esoteric work (that concerns only the secret study of yourself) with anyone.