The Secret Temple of Chapultepec 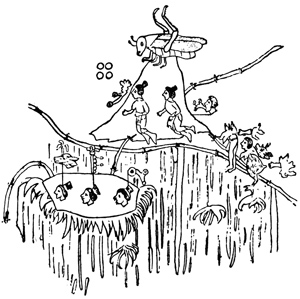 In ancient Rome, during the time of the Caesars, the cricket was sold in golden cages at a very high price. In Mexico City, at the Museum of Anthropology and History, there exists a very interesting picture related to the teachings that were taught to the Aztec nobility and priests in their secret temples.

In this picture, we see two individuals floating over the Hill of Chapultepec. A chirping cricket appears at the summit of the hill. Next to this scene, a floating human face appears; from the mouth emerge two waves of light which symbolize the chirping of the cricket, or in other words, the symbol for the monotonous and sharp sound of the cricket that the two people who are floating over the foothill must produce in order to penetrate into the temple.

The chirping of the cricket is the “still voice” that Appolonius of Tyana utilized in order to depart in his Astral Body. This is the small, still voice that Elijah heard when he went out, “and stood in the entering in of the cave in the wilderness.” (Read 1 Kings 19:12-14)

The human being is a triad of body, soul , and Spirit. A mediator between the Spirit and the body exists. This mediator is the body of the soul , the Astral Body. One possesses a soul , yet one is a Spirit. The Astral Body is part human and part divine; it is endowed with marvelous internal senses with which we can investigate the great mysteries of life and death. The mind, the willpower, and the consciousness abide within the Astral Body.

During the hours of ordinary sleep, all human beings act and travel in their Astral Body; however, upon awakening, not all of us remember what we saw, heard, or did while acting within that body. Therefore, in the mornings, upon awakening from one’s dreams, one must perform the effort to remember all that one had dreamt. One’s dreams are nothing more than experiences within the Astral World. One must carefully take note of all of them in a notebook.

When you perform your practices, concentrate on the sharp chirping of the cricket. This chirping must sound from within the smallest cells of your brain. If this practice is done correctly, you will soon be in that transition between vigil and slumber. Increase the slumber and the sound of the crickets’ chirping by using your willpower. Then get up from your bed and, with complete confidence, leave your bedroom and go towards the Temple of Chapultepec, or wherever else you wish to go. You must try to not lose the lucidity of your consciousness.

Do not mentally get up from your bed; instead, actually get yourself up. Nature will take charge of separating your Astral Body from your physical body. The physical body will remain sleeping in its bed and the Astral Body will become free to travel wherever you wish.

Without putting off the exercise delivered in the former chapter, lie down on your bed, and fall asleep while vocalizing the syllable LA; the intonation of this syllable corresponds to the natural note “fa” of the musical scale. You must prolong this syllable like this:

Immediately after, you must vocalize the syllable RA:

By purchasing a print edition of "Aztec Christic Magic", you get a high quality, permanent source of profound knowledge, you help us print more books, keep this website online, and allow us to give free books to prisoners, churches, libraries, and more.
Pick a Bookseller