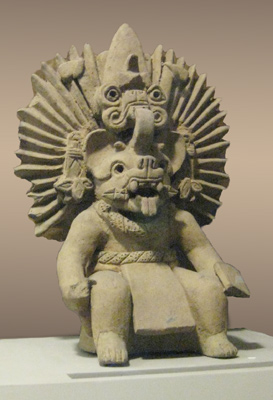 The town of Tzinacatlan in Chiapas (Mexico) is inhabited by the Tzoctziles (people of the bat) from the Mayan family and the town of Tzinacantepec in the valley of Toluca. In the Popol Vuh (Mayan Bible), the bat is a great angel who descended from heaven in order to behead the first Mayan people, who were made of wood. He is the same heavenly Bat who in the Popol Vuh advised Ixbalanque and Hunab Ku what they should do in order to become victorious in the ordeal within the cavern of the Bat God.

We find the Tzinacan (bat) sketched upon steles, codices, and Mayan vessels holding the livery of the God of the air. He is shown with a nasal appendage and triangular teeth that protrude downwardly from the commissures of his lips. He was always sketched on Aztec hearths, goblets, and basins, like the vampires from the hot lands of the south of Mexico.

His mouth is characteristic because of its canine and inferior, incisive teeth covered by his tongue, that always appears protruded in the Zapotec urns. He has big, well-formed ears, and protruding from them in the shape of leaves appears the tragus made of jade. He has short fingers on his paws that point towards the heights, in order to utilize the suckers on the palm of his hands (the suckers that serve the bat when it hangs itself from smooth surfaces), and his nasal appendage is in the form of a mounted chair or leaf.

The Nahua temples in the form of a horseshoe were dedicated to the cult of the Bat God. His altars were of pure gold and oriented towards the East.

The Bat God has the power to heal any type of sickness; yet, he also has the power of cutting the silver cord of life that unites the physical body to the soul . The Nahua Masters invoked the Bat God to ask him for the healing of their disciples or for healing of their profane friends. Only initiates assisted in that invocation, who, without touching their hands or bodies, and alternating men with women, formed a human chain in the interior of the temple. The extremes of the chain started at either side of the altar and all of them were seated in squatted positions with their back towards the wall. Freshly cut flowers were placed upon the altar and along its sides; upon two small columns carved in basalt were full-size clay hearths painted in red, the symbol of life and death. Logs of cypress (symbolic of immortality) burned within the clay hearths, whose aroma was mixed with the smoke of copalli (copal), odorous resins, and the powder of white seashells. The Master wore the livery of the God of the Air and Maxtlatl around his waist. Then, in the front, raising the extended palms of his hands, he vocalized three times the mantra ISIS, dividing it in two syllables, as follows:

Afterwards, with an obsidian knife whose hilt was made of jade and gold, he blessed the assistants, and in silence he performed the ritualistic invocation, “Lord of life and death, I invoke thee so that thou can descend to heal all of our aches.”

The imposing silence was interrupted only by the crackling of the hearths; then suddenly, the sound of flapping wings, together with an aroma of roses and spikenards, expanded all over the temple. A flame that elongated itself as if it wanted to touch the heavens came from the hearths; and the Master with the assistants prostrated until placing their foreheads on the ground.

The Nahua deity of death (the Bat God) descended wearing the livery of the God of the air or in the shape of an owl to the funerary ordeals of the Thirteenth Arcanum. The front stoop entrance to the temples of Nahua mysteries had thirteen steps, and Huehueteotl, the Old God, has thirteen locks on his head of hair.

A circular temple dedicated to the Sun existed inside the precinct where the Major Temple of Tenochtitlan was erected; this circular temple was orientated towards the East, and its ceiling allowed the sunlight to penetrate unto the altar. A gigantic sun of pure gold was placed upon the interior background wall of that temple; this gigantic sun was the visible representation of the great, invisible deity Ipalnemoani. Its door-entrance was the opened jaws of a serpent whose curved and menacing fangs protruded from its commissures, and in bas-relief upon the floor a great and bifid tongue protruded from the door of the temple. In the frontispiece of the temple, in bas-relief, there were the opened jaws of another serpent with very sharp fangs that symbolized the monster against which the adepts of the august Order of the Knight Commanders of the Sun had to fight.

The Tzinacalli (house of the bat) existed within the secret chambers of that temple of mysteries; it was a broad chamber with the interior aspect of a somber cavern, where the rituals of initiation to attain the higher degrees of Ocelotl (tiger) Knight and Cuauhtli (eagle) Knight took place. Upon the lintel of the small door concealed within the interior background wall of the cavern (a door that gave access to the temple), hung a great obsidian mirror; and on the floor in front of that small door burned a bonfire of pinewood.

The candidate for the initiation was taken to the Tzinacalli where he was left alone during the very late hours of the night. Previously, he was directed to walk in the obscurity towards the light of a bonfire, and once in front of it, to talk to the Guardian of the Threshold: “I am a child of the great Light; darkness move away from me.” The bats then began to screech and to tumble through the air upon the head of the candidate. The pinewood fire slowly diminished until only embers were left in it, which reflected upon the mirror. Suddenly, emerging from the gloom with a very noisy flapping of wings, and releasing a terrifying howling, a human shadow appeared who, with bat wings and maxtlatl around his waist, struck with his heavy sword and threatened to decapitate the intrepid invader of his domains.

Woe to the candidate who withdrew in terror! A door that until then was hidden in the rock opened in silence, and at the hinge post a strange person appeared who pointed the way towards the outside world of the profane, from where the candidate had come.

Yet, if the candidate had enough presence of courage and he dauntlessly resisted the assault of Camazotz (the God of the bats), the small door hidden in front of him was softly opened, and one of the Masters approached to encounter him; the Master then found and incinerated an effigy molded in amethyst paper that had the likeness of the candidate and that was hidden within the shadows of the cavern; meanwhile, the other Masters welcomed the candidate and invited him to enter into the temple. This ritual symbolized the death of the passions of the personality of the initiate in his passing from the darkness into the light.

Through the tests of this ordeal, to which the candidates of the initiation were submitted in the ancient schools of Nahua mysteries, their animal soul was sometimes depicted as a bat, because like the bat, the soul is blinded and deprived of its power for the lack of the spiritual light of the sun.

As vampire bats, the depraved and the avaricious ones fly down upon their prey, and afterwards they lazily go back into the gloomy caverns of their senses where they hide from the light of the day as those who live within the darkness of ignorance, desperation, and evil.

The world of ignorance is governed by fear, hate, greed, and lust. In it wander men and women who are only floating listlessly to and fro upon their passions. Only when the human being comes into the realization of the spiritual verities of life does he then escape from this underworld, from that damned cavern of bats, over which Camazotz, who sometimes even kills solely by his presence, hidden, lies in wait for his victims. The sun of truth rises in the human being and illuminates his world when he lifts his mind from the darkness of ignorance and selfishness into the light of wisdom and altruism. A symbol of this state of consciousness in the human being is the pair of eagle eyes that, upon the tarsus (feet) of Coatlicue, try to see towards the infinite.

We recommend you choose a private place in any of your rooms, so that every week, in that place, upon a small desk or table, you can study these chapters. A white mantle, a small wooden or metallic cross, and the light of two lit candles made of wax or paraffin must not be missing upon that desk. Choose the hour from any day of the week, for instance, Thursday from 9 to 10 or from 10 to 11 p.m. Before performing the invocation of Camazotz, the Bat God, you must nourish yourself only with fruits, legumes, rye bread, and milk for three days. Do not be afraid to perform the invocation of Camazotz, with whom you have to confront yourself, to successfully continue in our studies. The soul , purified by love and sincere devotion to his internal God, must neither fear anything nor anybody, but only fear itself. Keep such an experience of the path of your life only for you.