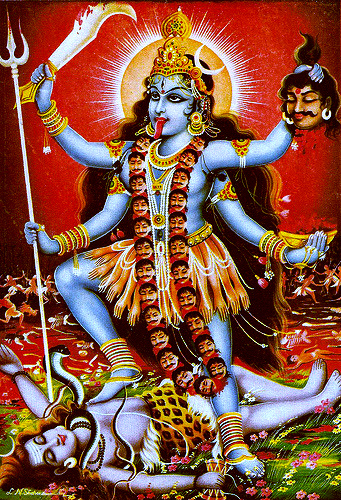 (Sanskrit कलि or काली, "the black one, night, goddess of time") In the sacred Vedas, this name refers to one of the seven tongues of Agni, the god of fire. The meaning has since changed to refer to the goddess Kali, the consort of Shiva.

The name Kali is derived from ka, the first consonant of Sanskrit, and which can mean "time, pleasure, light, sound, sun, air, soul , wealth, water, head, fire, body," and much more. Further, kā means "seek, desire, yearn, love." The second syllable lī means "to melt, liquefy, dissolve." Thus, in Tantra, the goddess Kali represents the power that can dissolve desire. Desire is the glue that binds us to suffering. Conversely, in negative forms of Tantra, Kali is worshipped as a fulfiller of desire, that which binds us to lust.

"In India, Kali the Divine Mother Kundalini is adored, but Kali in her black, fatal aspect is also adored. These are the two Marys, the white and the black. The two Serpents, the Serpent of Brass which healed the Israelites in the wilderness and the Tempting Serpent of Eden." - Samael Aun Weor, The Perfect Matrimony

"The Kula order and their goddess Kali come from the black magic of the Atlanteans." - Samael Aun Weor, The Major Mysteries

"In the human being, the Cosmic Mother assumes the form of the serpent. There are two serpents, the tempting serpent of Eden, which is the Goddess Kali, the abominable Kundabuffer Organ; and there is the Bronze Serpent that healed the Israelites in the wilderness, the Kundalini Serpent. These are the two Feminine principles of the universe, the Virgin and the Harlot, the Divine Mother or White Moon and Astaroth, Kali, or Black Moon, which refers to its tenebrous aspect. In synthesis, two great fires exist: the Sacred Fire of Kundalini which ascends through the dorsal spine, and the Kundabuffer which descends, precipitating downwards towards the Infernos. Kundalini is the serpent of Bronze which healed the Israelites in the wilderness, the serpent which Moses rose upon the Staff. The Kundabuffer Fire is the Tempting serpent of Eden, which descends downwards towards the Atomic Infernos of the human being. In Egyptian wisdom, this tempting serpent receives the name of Apep. In the rituals of ancient Egypt, Apep was portrayed in wax and with its head aiming downwards. Thus, they exorcised it and conjured it. The Initiate must fight against this tempting serpent of sexual passion, against this horrible Apep. The Initiate must fight to the death. This negative fire of Apep is the negative aspect of Prakriti, in other words Kali. Kali assumes the aspect of a horrible viper which is writhing in the mud (see the life of Krishna). If we want to defeat this Viper in the Cosmos, we must first defeat it within ourselves. We most not forget that we have a very terrible legion of devils, which is “Kali,” the abominable Kundabuffer Organ, the frightful “Apopi” serpent. People are victims of Kali, the Tempting Serpent of which the Hindus speak." - Samael Aun Weor, Tarot and Kabbalah

The mantra related to Kali is कॄं (Krim, Kreem, or Kring).