Sanskrit कलहंस from काल "time" + हंस "swan." A profound symbol of the relationship between love and sex.

The Hindu deity Brahma who represents the power of creation is called ekahamsa, the "one swan." His feminine counterpart Saraswati is also associated with the swan. This same symbol is found in Greek mythology in the story of Zeus taking the form of a swan to impregnate Leda.

Tradition relates that the swan has the ability to separate milk from water, a clear symbol of sexual transmutation: extracting the Mercury from the sexual energy.

8. WHERE WAS THE GERM, AND WHERE WAS NOW DARKNESS? WHERE IS THE SPIRIT OF THE FLAME THAT BURNS IN THY LAMP, OH LANOO? THE GERM IS THAT, AND THAT IS LIGHT; THE WHITE BRILLIANT SON OF THE DARK HIDDEN FATHER (a). (a) The answer to the first question, suggested by the second, which is the reply of the teacher to the pupil, contains in a single phrase one of the most essential truths of occult philosophy. It indicates the existence of things imperceptible to our physical senses which are of far greater importance, more real and more permanent, than those that appeal to these senses themselves. Before the Lanoo can hope to understand the transcendentally metaphysical problem contained in the first question he must be able to answer the second, while the very answer he gives to the second will furnish him with the clue to the correct reply to the first. In the Sanscrit Commentary on this Stanza, the terms used for the concealed and the unrevealed Principle are many. In the earliest MSS. of Indian literature this Unrevealed, Abstract Deity has no name. It is called generally "That" (Tad in Sanskrit), and means all that is, was, and will be, or that can be so received by the human mind. Among such appellations, given, of course, only in esoteric philosophy, as the "Unfathomable Darkness," the "Whirlwind," etc. -- it is also called the "It of the Kalahansa, the Kala-ham-sa," and even the "Kali Hamsa," (Black swan). Here the m and the n are convertible, and both sound like the nasal French an or am, or, again, en or em (Ennui, Embarras, etc.) As in the Hebrew Bible, many a mysterious sacred name in Sanscrit conveys to the profane ear no more than some ordinary, and often vulgar word, because it is concealed anagrammatically or otherwise. This word of Hansa or esoterically "hamsa" is just such a case. Hamsa is equal to a-ham-sa, three words meaning "I am he" (in English), while divided in still another way it will read "So-ham," "he (is) I" -- Soham being equal to Sah, "he," and aham, "I," or "I am he." In this alone is contained the universal mystery, the doctrine of the identity of man's essence with god-essence, for him who understands the language of wisdom. Hence the glyph of, and the allegory about, Kalahansa (or hamsa), and the name given to Brahma neuter (later on, to the male Brahma) of "Hansa-Vahana," he who uses the Hansa as his vehicle." The same word may be read "Kalaham-sa" or "I am I" in the eternity of Time, answering to the Biblical, or rather Zoroastrian "I am that I am." The same doctrine is found in the Kabala, as witness the following extract from an unpublished MS. by Mr. S. Liddell McGregor Mathers, the learned Kabalist: "The three pronouns , Hoa, Atah, Ani; He, Thou, I; are used to symbolize the ideas of Macroprosopus and Microprosopus in the Hebrew Qabalah. Hoa, "He," is applied to the hidden and concealed Macroprosopus; Atah, "Thou," to Microprosopus; and Ani, "I," to the latter when He is represented as speaking. (See Lesser Holy Assembly, 204 et seq.) It is to be noted that each of these names consists of three letters, of which the letter Aleph , A, forms the conclusion of the first word Hoa, and the commencement of Atah and Ani, as if it were the connecting link between them. But is the symbol of the Unity and consequently of the unvarying Idea of the Divine operating through all these. But behind the in the name Hoa are the letters and , the symbols of the numbers Six and Five, the Male and the Female, the Hexagram and the Pentagram. And the numbers of these three words, Hoa Atah Ani, are 12, 406, and 61, which are resumed in the key numbers of 3, 10, and 7, by the Qabalah of the Nine Chambers, which is a form of the exegetical rule of Temura." -HP Blavatsky, The Secret Doctrine 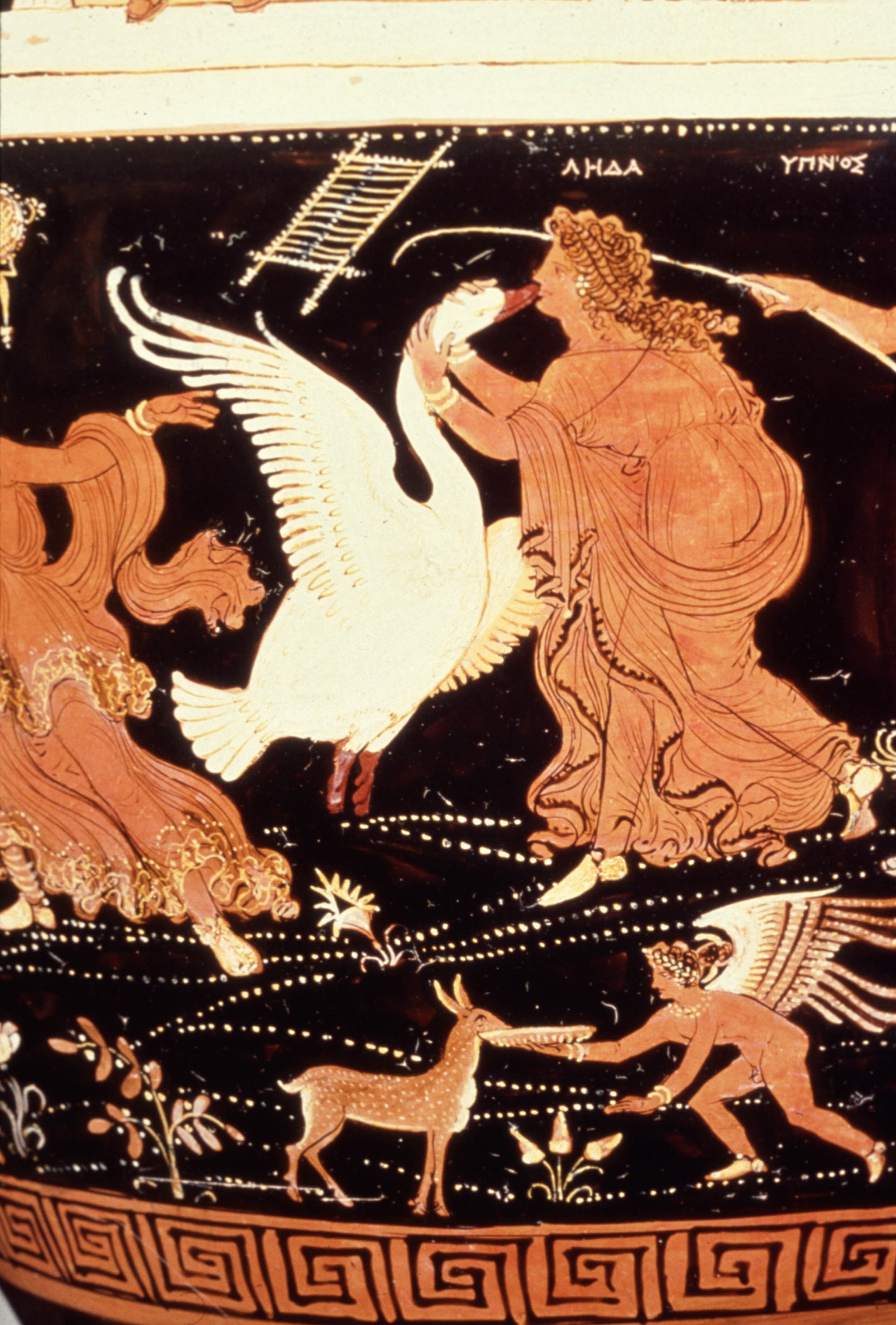 Zeus as a swan.