What are Succubi and Incubi? 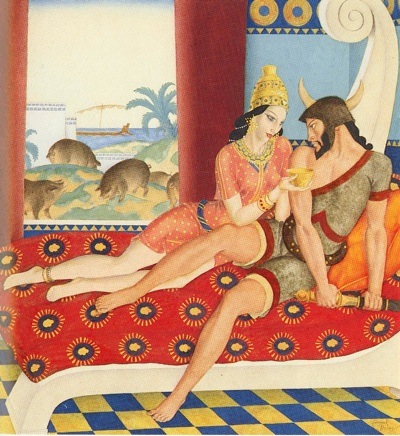 Succubus: (plural: succubi) a creature of female form who has sexual intercourse with us in our dreams and fantasies. Etymology: Middle English, from Medieval Latin, alteration of Latin succuba paramour, from succubare to lie under, from sub- + cubare to lie, recline.

Incubus: (plural: incubi) a creature of male form who has sexual intercourse with us in our dreams and fantasies. Etymology: Middle English, from Late Latin, from Latin incubare.

...when Cain had killed Abel, Adam separated from his wife and cohabitated with two female elementals, and from his intercourse with them was begotten a great and numerous progeny of demons and elementaries who at night time appear in attractive forms and thus give rise to offspring like unto themselves. In scripture, they are termed 'the plagues of the children of men.' Though human in appearance, they are void of hair and of them scripture speaks. 'I will chasten him with the rod of men and with the plagues of the children of men'...

Said Rabbi Simeon: "Adam as stated was separated from his wife a hundred and thirty years, during which time he begat demons and elementals that swarmed throughout the world. Whilst under the influence of the impure spirit he felt no desire to become associated with Eve, but after repenting and overcoming his animal propensities, he became again united to her and then it is said, 'he begat a son in his own likeness.' Observe that when a man begins walking in the wrong and downward path his thoughts and inclinations become impure and carnal, all love of virtue and purity leaves him through the impure elementals he attracts into his aura. Happy and blessed are they who find and walk in the path of light that shineth more and more unto the perfect day, for then are their lives truly clean and real lives and their offspring is like unto them; and of them scripture saith, 'For the upright shall dwell in the land.'" (Prov. ii., 21)...

Woe unto those who are ignorant and therefore unable to avert and ward off the influence of these defiling elemental beings that swarm in their myriads throughout the world. If it were permitted to behold them, we should be amazed and confounded and wonder how the world could continue to exist. —The Zohar: Genesis: Chapter XXXII

"The terms incubus and succubus have been applied indiscriminately by the Church Fathers to elementals. The incubus and succubus, however, are evil and unnatural creations, whereas elementals is a collective term for all the inhabitants of the four elemental essences. According to Paracelsus, the incubus and succubus (which are male and female respectively) are parasitical creatures subsisting upon the evil thoughts and emotions of the astral body. These terms are also applied to the superphysical organisms of sorcerers and black magicians. While these larvæ are in no sense imaginary beings, they are, nevertheless, the offspring of the imagination. By the ancient sages they were recognized as the invisible cause of vice because they hover in the ethers surrounding the morally weak and continually incite them to excesses of a degrading nature. For this reason they frequent the atmosphere of the dope den, the dive, and the brothel, where they attach themselves to those unfortunates who have given themselves up to iniquity. By permitting his senses to become deadened through indulgence in habit-forming drugs or alcoholic stimulants, the individual becomes temporarily en rapport with these denizens of the astral plane. The houris seen by the hasheesh or opium addict and the lurid monsters which torment the victim of delirium tremens are examples of submundane beings, visible only to those whose evil practices are the magnet for their attraction." —Secret Teachings of All Ages (1928) by Manly P. Hall

"Incubi and succubi are formed from the sperm of those who perform the imaginative anti-natural act of masturbation (in thoughts or desires). And because it comes only from the imagination, it is not genuine sperm (material) but corrupt salt. Only semen that comes from an organ selected by Nature for its development can germinate in a body. When sperm does not come from appropriate matter (nutritious substratum) it will not produce anything good, but will generate something useless. For this reason, incubi and succubi that originate from corrupt semen are harmful and useless in accordance with the natural order of things. These germs which are formed in the imagination are born of Amore Heress, which signifies the type of love whereby a man imagines a woman, or vice-versa, in order to copulate with the image created within the sphere of his mind. The expulsion of a useless, ethereal fluid results from this act, incapable of producing offspring but instead bringing larvae into existence. Imagination used in this way gives birth to an exuberant shamelessness which, if pursued, can make a man impotent and a woman sterile, because during the frequent practice of any such unhealthy visualization, much real creative energy is lost. The larvae-egos of lasciviousness are real, thinking, autonomous entities within which a good percentage of consciousness is imprisoned." —Paracelsus, De Origine Morborum Invisibilium

How to Eliminate Succubi and Incubi

Disciple: Venerable master, then do the incubi and succubae require a special form of destruction, a special technique?...

Samael Aun Weor: Well, I have been reflecting now, and I see the need to disintegrate them, just as any other aggregate disintegrates...

Disciple: Are they aggregates?

Samael Aun Weor: Yes, created by those who have such a vice!

Disciple: So, would a smudge cleaning help us with this [such as sage, rue, etc]?

Samael Aun Weor: Smudge cleaning is not worth it there! There the only thing that is worth is the spear, and a firm work with the divine mother kundalini in the forge of the cyclops! There are no smudge cleanings for psychic aggregates, these are not removed by smudge cleansing.

Disciple: Venerable master, I had understood that the incubi and succubae, with a little "sulfur powder" placed on the soles of the feet disintegrate.

Samael Aun Weor: Well, up until now, that's what I thought. And now I regret having believed so; now I am realizing that these are inhuman psychic aggregates, that must be turned to dust, like any other aggregate such as selfishness, such as hatred, violence, etc. That is the harsh reality of the facts! And may Mr. Franz Hartmann forgive me, then, for having contradicted his text: “the elementals”. We have changed our minds about that; experience is telling us the right thing. - Movies, Education, and the Difference Between Egos and Mental Representations