This Christmas it is necessary for you to deeply comprehend the evolutionary and devolutionary processes that the Ens Seminis [semen] undergoes, because with infinite patience you can find the whole Ens Virtutis of the fire element within it.

Esoteric traditions state that after the disappearance of the Atlantean continent, certain knowledge related to the origin and significance of the Ens Seminis survived.

Ancient traditions also state that this knowledge related with the Ens Seminis could survive the submerging of Atlantis. Yet, after thirty-five centuries of incessant wars, all of that knowledge was lost.

Ancient priests state that from all of the primeval wisdom related with the Ens Seminis, there only remained the tradition which explicitly affirms that the possibility of the intimate Self-realization exists with the Exiohehary, semen or sperm.

Certain fragments of information which are dispersed widely in distinct places indicate to us the methods in order to work with the Ens Seminis. The primeval Aryans, descendants of the Atlanteans, tired of so many wars, started to acquire, to quest for, the esotericism of the Ens Seminis.

The searchers yearning for the light knew very well through tradition that individual Self-perfection is achieved with the Ens Seminis. Yet, they ignored the Tantric clue of the Maithuna. Thus, they suffered while searching for it in vain.

Truly, only the ancient Egyptian, Hindustani, etc. Hierophants who were descendants of the ancient Atlantean Society called Akaldan were in possession of the whole Tantric science with the secret clue of the Maithuna.

Admission into the ancient schools of the mysteries was something very difficult because the ordeals were terrible. Thus, there were few who passed them with success.

The great quantity of yearners for the light knew nothing about the Maithuna, yet through traditions they comprehended that Self-perfection was achieved when the Ens Seminis was wisely transmuted. 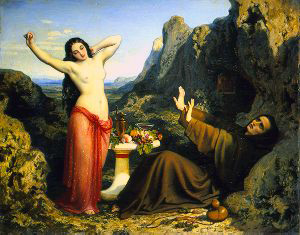 The ignorant always proceed with ignorance. This is why many believed that only with mere sexual abstinence the problem of their Self-realization was taken care of.

This mistaken concept originated many communities of abstinent monks who were organized into sects and religions which were ignoring the Maithuna.

These ignorant people believed that the problem in order to attain their Self-perfection was resolved for them only with sexual abstinence. Ignorance was, has been, and always will be that way.

What is most grievous in this matter is that still in this day and age, not only monks but also many pseudo-occultists and pseudo-esotericists exist who are convinced that only with sexual abstinence the problem of their intimate Self-realization is resolved.

Formidable evolutions are within the sperm, yet there are also tremendous devolutions. For instance, the natural process of development of the sperm is evolution in itself, since the sperm is the final outcome of what we eat and drink.

It is also necessary to know that the evolutions of the sperm are submitted to the fundamental sacred cosmic Law of the Heptaparaparshinokh, which is the Law of the Holy Seven, the septenary law.

When the Ens Seminis, the sperm, has completed its septenary evolution, then it must receive an external impulse and proceed to be transmuted with the Maithuna, otherwise the Ens Seminis enters into a full process of devolution or degradation, thus converting the individual into a degenerated infrasexual.

The devolution of the sperm (Ens Seminis) produces, among many other pernicious substances, one that is specifically malignant. It has the property of originating two types of actions within the general functioning of the physical organism.The first type of action consists of triggering the deposit of superfluous fat within the organism.The second type of action consists of originating within the human being certain malignant vibrations which are known in esotericism as Poisoninioskirian Vibrations.

The first type originates human pigs, that is to say, horrible, obese humans who are filled with fat.

The second type originates skinny, emaciated humans who are intensely charged with the perverse Poisoninioskirian Vibrations.

These type of Poisoninioskirian Vibrations manifest themselves in a dualistic way:

These are, in synthesis, the dualistic manifestations of these tenebrous vibrations.

Fanaticism tends to be external, while cynicism is internal. Behold here the two sides of the same coin: the obverse and the reverse.

What is most grave in this matter of absurd sexual abstinence is that the tenebrous Poisoninioskirian Vibrations not only reinforce the evil consequences of the Kundabuffer Organ, but moreover, these vibrations can truly develop such a malignant organ as well.

If we take into account the fact that opposite things complement and contain each other (for instance, the darkness is within the light and vice versa; within virtue lies sin, its latent opposite, etc.), then we must comprehend in depth the word Kundalini .

The word kunda reminds us of the Kundabuffer Organ, and lini signifies “end” in the ancient Atlantean language.

Therefore, the meaning of the word kundalini is: “The end (elimination) of the Kundabuffer Organ.”

By deeply analyzing this matter, we arrive at the logical conclusion that we need the Maithuna in order to transmute the Ens Seminis and to eliminate not only the Kundabuffer Organ, but moreover to eliminate the remaining evil consequences of such an organ.

The hindmost vestiges of the Kundabuffer Organ are eliminated when the “I” is dissolved and the serpent of fire ascends up through the medullar canal.

This is why we can give the name of Kundalini to the sacred fire, since this name signifies: “The end (elimination) of the Kundabuffer Organ.”

By purchasing a print edition of "Elimination of Satans Tail", you get a high quality, permanent source of profound knowledge, you help us print more books, keep this website online, and allow us to give free books to prisoners, churches, libraries, and more.
Pick a Bookseller
Share This Page: